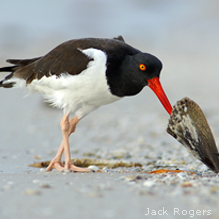 The American Bird Conservancy (ABC) has released a list and map of key bird sites most immediately threatened by the ongoing Deepwater Horizon oil spill in the Gulf of Mexico (last updated June 6, 2010). The sites previously had been designated Globally Important Bird Areas by the organization, and they are directly in the path of the advancing oil slick.

“This spill spells disaster for birds in this region and beyond,” said ABC President George Fenwick. “It is ironic that next weekend is International Migratory Bird Day. At a time when we should be celebrating the beauty and wonder of migratory birds, we could be mourning the worst environmental disaster in recent U.S. history.”

The Gulf Coast is extremely important for hundreds of species of migrants, which variously breed, winter and rest here during migration. The population effects on birds from this spill will be felt as far north as Canada and Alaska and as far south as South America.

The complexity of the Gulf coastline, with numerous bays, estuaries, inlets, marshes and creeks, will make cleanup extremely difficult; impacts could last for decades for much of the habitat, and some species may suffer significant long-term population declines.

All coastal nesting species (herons, terns, skimmers, plovers, gulls, rails, ducks) are currently present on the Gulf Coast, including several species on the U.S. WatchList of birds of conservation concern. The impact to these species depends on how long the leak lasts and what happens with weather and currents. The leak could persist for weeks or months, and end up being the worst environmental disaster in U.S. history.

For species with long life spans and low reproductive rates (such as reddish egrets and least terns), acute mortality events such as this can have long-term population-level impacts if they affect a large proportion of the breeding population. This is because adults that survive do not produce young quickly enough for populations to recover quickly.

Species where large proportions of populations concentrate in a few, discreet locations (including species with only a few breeding colonies and species that concentrate en masse during migration stopovers) are particularly vulnerable to these events.

Compounding problems for songbirds, not normally directly affected by oil spills, is smoke billowing skywards from the burning oil that was set alight to try to minimize damage to marine life.

“Millions of our songbirds are crossing the Gulf now, and will arrive stateside perilously weak and undernourished from their journey. The smoke may well compound their precarious situation and potentially lead to birds failing to make it to shore, or arriving so weakened that they are unable to survive,” said Fenwick.

Gulf Coast Least Tern Colony
One of the world’s largest colonies of the threatened least tern.

Lower Pascagoula River – including the Pascagoula River Coastal Preserve
The coastal marshes at the mouth of the river support yellow and black rails, snowy plovers and endangered wintering piping plovers.

Delta National Wildlife Refuge
Large numbers of wading birds nest here, including white ibis, snowy egrets and herons; thousands of shorebirds use the mudflats in winter and during migration, including dunlin, long-billed dowitcher and western sandpiper as well as endangered piping plover.

Baptiste Collette Bird Islands
This artificial barrier island, created from dredge spoil, is one of the many Louisiana coastal islands that could be affected. Birds found here include caspian tern, brown pelican, gull-billed tern and black skimmer.

Learn how birds and other wildlife are affected by oil.
Read about the special risks facing brown pelicans.
View a photo gallery of bird species at risk from the spill.