How the Gulf Oil Spill Could Hurt Animals

The oil spill in the Gulf of Mexico threatens hundreds of species, and some of its effects may not be felt for months—or longer 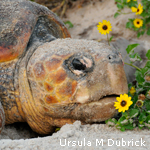 Twenty-one years after the Exxon Valdez oil spill, the wildlife of Alaska's Prince William Sound is still struggling to recover. With a sunken BP oil rig gushing thousands of barrels of oil each day into the Gulf of Mexico, the battered Gulf Coast region—still recovering from the devastation of Hurricane Katrina—is bracing for its own catastrophe.


Here are just a few of the ways Gulf wildlife could feel the effects of the spill for months—even years—to come...

Five of the world’s seven species of sea turtles are found in the Gulf of Mexico, and all of these five are listed as either endangered or threatened, including the loggerhead turtle (pictured).

These reptiles are threatened by oil at every stage of their lives: as eggs, hatchlings, juveniles and adults.

Studies have found that sea turtle eggs contaminated by oil—even a small amount—may either fail to hatch or produce weakened, deformed hatchlings. Those hatchlings that make it successfully from their sandy nests to the sea face several threats: Since they are tiny, they risk being impaired or overwhelmed by an oil slick. Young turtles spend much of their time swimming at the surface, making them more likely than adults to run into a slick on top of the water and leaving them prone to being poisoned or coated by the sticky oil.

Even adults—sea turtles can live longer than 50 years in the wild—are at risk. Studies have found that sea turtles, which are air-breathing animals and must surface regularly, show no natural avoidance behaviors when confronted with an oil slick. They will even attempt to feed upon tarballs, the dark chunks that form as crude oil weatherizes, or ages. Because oil can kill huge swaths of seagrass, one of the green sea turtle’s primary food sources, adult sea turtles may also suffer from malnutrition. 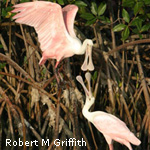 Birds that come into contact with oil can be impacted in many ways, often resulting in their death.

Species that frequent coastal waters are especially at risk from the BP Oil Spill. These include seabirds—brown pelicans (removed from the endangered species list in 2009 after a long recovery from the effects of DDT), terns (royal, Caspian, Sandwich and least), and laughing gulls—and wading birds—the roseate spoonbill (pictured), ibis, reddish egret and other herons and egrets, as well as the snowy plover, a federally listed threatened species that breeds along the coast of the Gulf.

Gulls, pelicans and other birds that frequently land and float on the water can experience deadly hypothermia when oil destroys the insulating quality of their feathers. The birds try to eat more to stay warm, but their ability to forage decreases as they sink lower and lower into the water, their buoyancy decreased by the oil. The birds desperately groom their feathers with their bills, inevitably consuming some oil, which may lead to very serious effects: ulcers, diarrhea, kidney and liver damage, anemia and even death. Breathing in oil can lead to pneumonia, neurological damage and eventually cancer.

Less obvious long-term impacts are likely to occur as well: The entire food chain, from phytoplankton and zooplankton to top level predators such as fish-eating birds, may be disrupted by the presence of oil.  Toxic chemicals may accumulate in the birds’ bodies, weakening them and making them more prone to disease and predation. If oiled birds don’t die from the exposure, there is evidence that their reproductive success is lowered by exposure to even small quantities of residual oil. 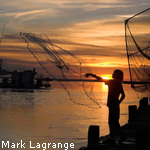 The seafood industry has long been at the heart of coastal Louisiana’s economy. Shrimp, oysters and other seafood pump $2.4 billion a year into the Gulf coast economy.  Fish and shellfish are a key link in the region’s food chain, with many seabirds and other wildlife relying on them for sustenance.

Following an oil spill, fish eggs and larvae are at particular risk because they are immobile and can’t escape the spreading oil slick.

Making matters worse in the current situation, the BP oil spill comes during spawning season, threatening the survival of the next generation of the Gulf’s fish and shellfish. The estuaries and mangroves where adult crustaceans breed are likely to suffer major damage from the spill, which could have a devastating effect on the region’s fishing industry.

The Gulf of Mexico ecosystem, even before the BP oil spill, was already taxed by decades of human impacts and by Hurricane Katrina. Because both shrimp and oysters readily consume environmental toxins, both are likely to pass on the contaminants from the spill to their predators, from fish to whales to humans.

Already, federal authorities have temporarily banned commercial and recreational fishing in the waters most affected by the spill, citing health concerns. 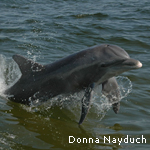 The effects of oil on marine mammals can be difficult to assess. Sperm whales, bottlenose dolphins (pictured) and other mammals in the gulf live most of their lives out at sea. For this reason, they are likely to be among the first Gulf inhabitants to encounter the spill. Unlike fish, marine mammals are air-breathers and must surface frequently, bringing them into contact with the slick that now covers thousands of square miles of the Gulf.

Marine mammals can suffer a variety of ill effects from exposure to oil: chemical burns and irritation from direct contact, ulcers and internal bleeding from consumption, and poisoning from feeding on contaminated prey. In other oil spills, marine mammals have suffered major losses to their populations. Two orca pods affected by the Exxon Valdez lost 40% of their numbers and still have not fully recovered; the pods’ reproductive success appears to have suffered long-term damage.

National Wildlife Federation staff are working on-the-ground and across the country to assess the damage being caused by the BP Oil Spill. Find out how you can help.