Six Questions to Test Your Knowledge of American Wildlife

Using information from Richard Conniff’s new book, "The Species Seekers: Heroes, Fools, and the Mad Pursuit of Life on Earth" (Norton, November 2010), here is a quiz for wildlife fans 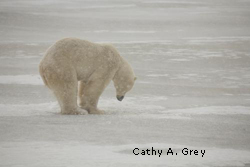 1. In 1773, Constantine John Phipps, 2nd Baron Mulgrave took two ships on a voyage toward the North Pole.  What was the mission’s outcome?

A.  He found the Northwest Passage.
B.  He saw a polar bear.
C.  He was a spy and brought back early evidence of revolutionary sentiments in the American colonies.
D.  He had to be rescued from the ice.


Capt. Constantine Phipps’ two ships, the Racehorse and the Carcass (with a young Horatio Nelson as midshipman), set sail in June 1773. They never reached the North Pole, returning to England in September of the same year. The mission was not, however, a total loss. Phipps was the first European to see and describe a polar bear, which he named Ursus maritimus and described in A Voyage Towards the North Pole Undertaken by His Majesty’s Command (1774). The polar bear had been thought to be a separate genus, Thalarctos, but subsequent evidence did not support this theory, and Phipps’ name stands. Although the polar bear is found throughout the Arctic, the largest populations live in North America.


2. There are more than 10 subspecies of the cutthroat trout.  Who described the first specimen ?

President Thomas Jefferson helped establish the importance of the military in natural science in 1803, when he deployed two good Army men, Captain Meriwether Lewis and Lieutenant William Clark, to explore the American West. Jefferson arranged for Lewis to get special training in scientific collecting methods and instructed the officers to notice "the animals of the country generally.” The expedition went on to record the scientific discovery of the elk, grizzly bear, western rattlesnake, cutthroat trout, trumpeter swan and several hundred other plant and animal species. “Cutthroat” refers to the red coloration under the fish’s jaw. Cutthroat trout were given the species name clarki in honor of William Clark.

3. Thomas Jefferson used a moose to support which of his obsessions?

A.  Natural history murals in Monticello
B.  His bone collection in The White House
C.  Refuting the “theory of American degeneracy.”
D.  The Louisiana Purchase 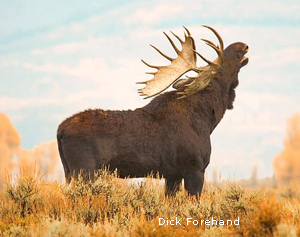 Refuting the “theory of American degeneracy.”


French naturalist Georges-Louis Leclerc, Comte de Buffon, proposed in 1749 that “a niggardly sky and unprolific land” caused species in the Americas, including humans, to become puny and degenerate.  Thomas Jefferson was obsessed with discrediting this misguided idea.  He constructed elaborate tables of American species, setting “the heaviest weights of our Animals…from the mouse to the mammoth” against diminutive Old World counterparts.  When he sailed in 1784 to become American trade minister and then ambassador to Paris, Jefferson carried “an uncommonly large panther skin” in his luggage with the idea of delivering it to Buffon in person.  Later he followed up with a moose.


4. What is the most abundant prairie dog species?

The black-tailed prairie dog is the most abundant prairie dog in central North America. It was described by the Lewis and 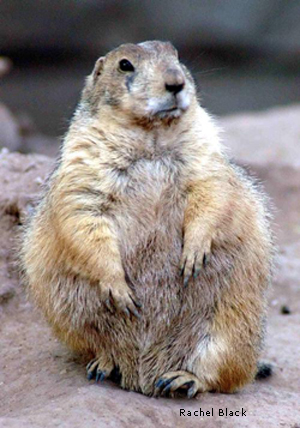 Clark Expedition in their journals and diaries. On September 7, 1804, they "discovered a Village of an animal the French Call the Prairie Dog.” Lewis called it the “barking squirrel.” The notorious species monger Constantine Rafinesque gave it its official name, Cynomys ludovicianus, after viewing the collections that Lewis and Clark sent back.  Its genus, Cynomys, derives from the Greek for “dog mouse.”

A.  The mudpuppy
B.  A fish with bulletproof scales
C.  A red mullet
D.  A finch

A fish with bulletproof scales.

Naturalist Constantine Rafinesque sometimes put names on species he had never even seen, much less collected.  He once described a new species based on nothing more than a passing reference in somebody else’s travel book. He also described nine apocryphal fish species based on drawings John James Audubon, the noted bird painter, had cooked up as a prank. Audubon spun him a yarn about how the devil-jack diamond fish had bulletproof scales, which the woodsman could use with flint to strike a fire. Rafinesque duly recorded it as Litholepis adamantinus–meaning roughly “unbreakable stone scales.” Audubon may have perpetrated this hoax as revenge for the destruction of his beloved Cremona violin.  Rafinesque destroyed it swatting at bats, trying to kill them so he could identify “a new species.”


6. In what evolutionary controversy was the trumpeter swan used as evidence?

A.  Is each human race a different species?
B.  Are birds the modern descendants of dinosaurs?
C.  Which came first:  the chicken or the egg?
D.  Is long-distance migration an innate or learned behavior? 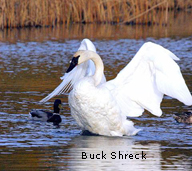 A social reformer, trained naturalist and Audubon collaborator (Viviparous Quadrupeds of North America), the Reverend John Bachman of Charleston, South Carolina, knew his way around the species question. Bachman carefully avoided religious arguments in making the case that all human races belong to a single species. Instead, he relied on the same scientific methods used to separate one species from another in the animal world. He pointed out, for instance, that the whooper swan and the trumpeter swan resemble each other so closely that they were long regarded as one species.  Then dissection revealed significant differences in bone count and other internal structures, causing naturalists to split them apart as two separate species. “Let us now apply this rigid rule of investigation to the anatomy of the bones and the physiology of the various organs in the different races of men,” he suggested. Then he did the numbers: The human breast bone consists of eight pieces in infancy, three pieces in youth, and a single piece in old age--regardless of race.  The human skull contains eight bones, with four bones in the ear--again regardless of race. The number of milk teeth and their adult replacements is identical in all races. Bachman’s work influenced Darwin and others who saw the common origin of all humans as essential for evolutionary theory.


For more information about The Species Seekers: Heroes, Fools, and the Mad Pursuit of Life on Earth, visit Richard Conniff's website.  Quiz maker Karen Conniff also has a quizwhiz.com blog.