When a scientist discovered distinct temperaments in a population of Rocky Mountain bighorns, he initiated a study that is providing new insight into a species’ survival strategies 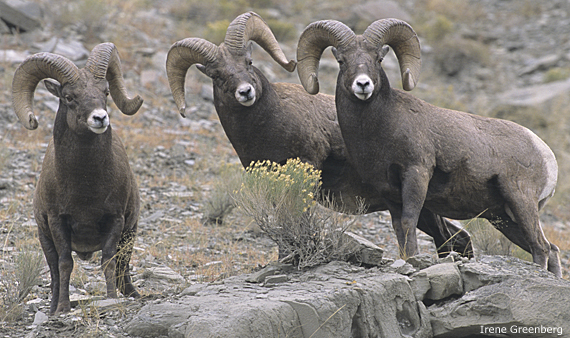 ROCKY MOUNTAIN BIGHORN sheep are known for having remarkable climbing skills, skulls that can withstand crushing blows during rutting season and a number of other unique traits. But until Denis Réale began studying them, no one ever thought of sheep as having a range of distinct personalities.

A biologist at the University of Québec–Montreal, Réale has been conducting research for more than a decade at a place called Ram Mountain in the foothills of the Canadian Rockies in Alberta, where scientists have compiled a wealth of data about bighorns. Since 1971, a research team led by Marco Festa-Bianchet of the University of Sherbrooke has been monitoring the overall health of a population of the animals that confines itself to a 15-square-mile home range in the area.

One of the principal tools of the study is a large corral the scientists use to temporarily capture the animals. When the field season begins in May, the enclosure is baited with a salt lick. Soon after, the bighorns begin to amble in for a taste, and the researchers quickly collect their vitals before sending the creatures back on their way. In the past three decades, nearly every ewe and ram on the mountain has received an ear tag or visual marker of some kind.

When Réale started working on the Ram Mountain project as a post-doctoral student in 1998, he spent much of his time observing the behavior of ewes as they entered the corral. And he saw something curious: A few ewes would enter the enclosure again and again to get at the salt; others would quickly duck in and out, maybe once or twice; still others did little more than lurk near the entrance. Individual ewes also reacted differently to being captured. Some resisted vigorously when the field workers weighed and measured them; others were more accommodating.

Réale realized that each ewe’s reactions tended to be consistent: The same animals behaved the same way almost every time. He wondered if these individual tendencies might constitute a sort of bighorn temperament, or personality. “It was a really new field of study at the time,” he says. Personality is difficult to assess among wild animals, so Réale devised a way to isolate two particular elements of temperament: whether a bighorn was bold or shy, and how docile it was. He developed a boldness index by counting the number of times a particular ewe was captured in the corral over the summer. Those that visited multiple times were quantitatively more assertive in challenging situations. “We called those few that got caught a lot the ‘salt junkies,’” says David Coltman, a researcher at the University of Alberta who collaborates on the study.

Réale analyzed the data and realized that a ewe’s boldness or docility did not vary with its age, weight or reproductive status. Moreover, bold ewes were more successful than shy ewes at weaning their lambs. When he published the results in 2000, it was one of the first studies to show that variations in temperament might have an impact on an animal’s reproductive success.

Still, Réale wondered whether those variations had other ecological or evolutionary consequences—a broader question that researchers were just beginning to consider. “Personality can vary a lot among individuals,” says Réale. “But how does it fit into an animal’s life history? How might natural selection act on it? That was the next thing for us to figure out.”

In 1997, he got some partial answers when a cougar came to Ram Mountain. Annual bighorn mortality there tripled from its long-term average to more than 25 percent annually, enabling Réale to compare high-predation years with low-predation years. He found that when predation was at its earlier, lower levels, the animals’ temperaments did not seem to be a factor in their survival. But after the cougar arrived, bolder ewes appeared to have an advantage. This seemed counterintuitive. How could a more risk-prone ewe have a better chance of surviving than a cautious one? A possible answer, Réale observed, is that bolder ewes are more likely to investigate predators—an effective deterrent for cougars, which prefer to ambush prey.

It was the first time anyone had been able to measure survival based on temperament, but it also presented Réale with a new conundrum. “Evolutionary theory,” he says, “tells us that natural selection should erode this variation.” If one temperament is favored over another, he notes, the one less favored eventually should be weeded out. But such was not the case at Ram Mountain, and Réale wanted to see how the two variations could coexist in the wild.

To do this, he and Coltman used genetic techniques that allowed them to look at a group they had not been able to work with before: bighorn rams. Since the males are considerably larger and feistier than ewes—and much more reluctant to enter the corral trap—researchers had not been able to gauge their temperaments as easily. But using the project’s extensive data on the lineages of maternal and sibling relationships, the scientists could predict a ram’s personality based on the temperaments of its mother and other female relatives, since boldness and docility are heritable traits. Then they could see how frequently the ram reproduced.

Bighorn males have two mating strategies: They can be either what scientists call tenders or coursers. Tenders are the older, enormous rams that rise to dominance by besting other males during the pre-rut rounds of skull-rattling head butts for which bighorns are famous. They mate by isolating a ewe that is in estrous. Coursing males are subordinates—usually younger rams—that chase estrous ewes away from tending rams and attempt to mate with them. Coursers might occasionally sire a lamb, but according to a 2001 study by Coltman, the most successful tending ram sires more than a third of the youngsters in any given year.

When the scientists looked at the animals’ bloodlines, they realized that tending rams generally were less aggressive than coursing rams. “In essence, the more patient males are gambling that they’ll live long enough to become the dominant rams,” says Coltman. “But the less docile rams—the bad boys—apparently don’t like waiting.” They try to mate while they are still young. Perhaps not coincidentally, these males also are more likely to die young.

For the scientists, the results suggest that, like natural selection, sexual selection is based on temperament: The more docile a ram is, the more likely he will live to become a dominant tender. Meanwhile, some of the more pugnacious males are still able to pass on their genes, and so their traits also persist.

Now, Réale is expanding his work to examine some new hypotheses about animal temperaments. “We are just starting to get a clearer vision of how personality affects life-history strategies across many species,” he says. “It’s exciting stuff.”