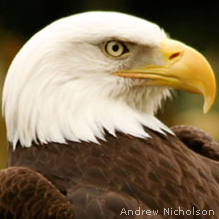 Throngs of bald eagles from Alaska and Canada have always shifted south in winter. In recent years, as the species continues to recover from its brush with extinction, those numbers are increasing steadily. From Maryland’s Chesapeake Bay to Washington Skagit River, dozens, even hundreds, of the birds congregate each winter along waters in every state except Hawaii. Here are some of the best places in the country to see them:


1. KLAMATH BASIN, on the California-Oregon border, hosts the largest concentration of wintering bald eagles in the Lower 48. As many as 1,000 eagles occupy the refuge complex during the peak months of January and February. Many of the birds are visible from the Lower Klamath and Tule Lake auto tours. Call the Klamath Basin National Wildlife Refuge at (530) 667-2231, or visit the refuge online at http://klamathbasinrefuges.fws.gov.

2. UPPER SKAGIT RIVER WATERSHED in Northwest Washington draws hundreds of eagles to tens of thousands of dead and dying salmon at the end of the spawning season. Eagle numbers peak in late December and early January. Contact the Bald Eagle Interpretive Center in mid-December through mid-February at (360) 853-7077, or (360) 853-7283 during the rest of the year. Information is also available at www.skagiteagle.org.

3. UPPER MISSISSIPPI RIVER is jam-packed with bald eagles in winter, and some of the best views are available below the locks and dams. Visit Nelson Dewey State Park in Cassville, Wisconsin, in December through February. Contact the park at (608) 725-5374, and find out more about Cassville’s eagles at www.cassville.org/nelsondewey.html.

4. MISSOURI'S SQUAW CREEK NATIONAL WILDLIFE REFUGE is festooned with bald eagles in November and December, when the waterfowl population peaks. Many eagles perch along the main auto loop. Contact the refuge at (800) 877-8339, or visit http://midwest.fws.gov/SquawCreek.

5. WOLF LODGE BAY within Lake Coeur d’Alene in Idaho is frequented by dozens of migratory bald eagles when the kokanee salmon start to spawn. The eagles begin arriving in November, and the largest concentrations generally occur in late December and early January. Contact the Bureau of Land Management at (208) 769-5000. For an online brochure including a map of eagle viewing sites, see http://www.sandpoint.com/lifestyle/fall06/baldeagles.asp.

6. QUABBIN RESERVOIR in Massachusetts is one of the Northeast’s best-known winter eagle lookouts. Bald eagles were introduced there in the 1980s. Today, year-round resident eagles are joined by dozens more in winter, with numbers peaking in February. Contact the visitor center at (413) 323-7221.


7. KARL E. MUNDT NATIONAL WILDLIFE REFUGE in South Dakota hosts anywhere from 50 to 200 bald eagles in winter. The birds begin to arrive in late October. Numbers peak in December and January. Contact the refuge at (605) 487-7603, or visit http://www.fws.gov/lakeandes/mundt/.

9. BLACKWATER NATIONAL WILDLIFE REFUGE in Maryland is a place to see abundant eagles not only in winter, but also throughout the rest of the year. The refuge hosts a healthy breeding population of bald eagles and high concentrations of wintering eagles drawn by migratory waterfowl each winter. Contact the refuge at (410) 228-2677 or see http://blackwater.fws.gov.

10. OKLAHOMA’S RIVER AND RESERVOIRS host large numbers of bald eagles each winter. Some of the best public viewing is available at three sites: Kaw Lake near Ponca City, Salt Plains Lake near Enid and the Keystone Reservoir on the confluence of the Cimarron and Arkansas Rivers on the west side of Tulsa. Contact the Oklahoma Department of Wildlife Conservation at (405) 521-4616, or visit http://www.npwrc.usgs.gov/resource/birds/okbald/winter.htm.

Before You Go: Eagle Etiquette
When you head out to see eagles, keep in mind that human presence can stress the birds and cause them to waste precious energy that they need to survive. To avoid being disruptive, follow these basic tips:
• Stay in or near your vehicle at roadside viewing areas
• Move quickly and quietly to observation blinds, where you will be safely hidden from the birds’ view
• Avoid making loud noises, such as yelling, slamming car doors and honking horns
• Use binoculars or a spotting scope to view the birds from a comfortable distance
• Never attempt to make an eagle fly

Adapted from " Where the Eagles Are " by Rene Ebersole, National Wildlife, December/January 2005.

Learn more about how bald eagles are doing in the United States.