Tired of squirrels raiding your bird feeders? Here are some ways to thwart the furry bandits. 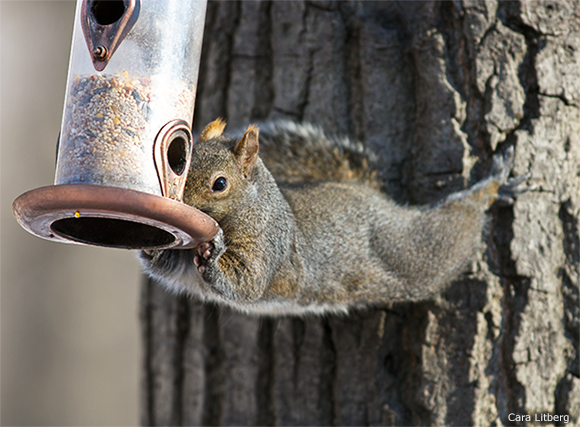 George Harrison, an experienced birder and the author of several books—including Squirrel Wars and Other Battles with Backyard Wildlife (Willow Creek Press, 2000)—interviewed people around the country who shared the following tips for keeping squirrels out of bird feeders.

A man in St. Louis, Missouri, found that a length of aluminum duct mounted under the feeder foils the squirrels. "The squirrels go up the post and into the duct, but no farther," he says.

For about four dollars, a Quincy, Illinois, homeowner has enjoyed 99 percent squirrel-proof feeders – using a Slinky. He attached one end of the Slinky to the top of the pole and allowed the rest to hang so that the pole runs up through the center of the Slinky. Typically, he says, "the squirrels will try to jump onto the pole, grab the Slinky and promptly find themselves dumped to the ground."

Using plastic bottles, a Williamsburg, Virginia, resident devised a simple and cheap way to keep squirrels off his bird feeders. "I made holes in the bottom of a few two-liter juice bottles, large enough to get around the post of my bird feeders," he says. "Then hanging them lengthwise, I secured the bottles a few inches below the feeder with duct tape." He used the same setup on a hanging feeder, sliding the bottles down the wire to position them above the feeder.

Plastic soda bottles strung on heavy galvanized steel wire worked for author and birder George Harrision when he conducted a bird-seed experiment at his home in Hubertus, Wisconsin. George drilled holes in the bottoms of the bottles and strung them lengthwise on a 30-foot wire that ran through the holes and the open ends of the bottles, eight feet above his patio. The six tube feeders hanging between the bottles were never touched by squirrels, which would have rolled off the bottles had they tried. Harrison also found that a clear plastic dome baffle placed directly above a hanging tube feeder works well, as long as the feeder is high enough off the ground. The squirrels simply slip off the plastic baffle without getting to the feeder.

A handyman in Donora, Pennsylvania, discovered that the same pipe used for plumbing can be an effective deterrent for squirrels, which can´t climb it. Using the pipe as a post on which a bird feeder is mounted prevents the creatures from getting any traction. They just slide down. The Pennsylvania handyman decorated his posts with white-and-black paints to make them look like white birch. He then drilled holes in the tops for attaching the feeders with wire.

Another option is the WildBills bird feeder. Though some people have wired their feeders with electricity to keep squirrels away, that can be extremely dangerous. A safer alternative is The WildBills bird feeder, which has a built-in, battery-operated charger that lightly zaps squirrels when they make contact. Birds do not get a shock because they cannot make a contact with only two legs. The small charge only startles squirrels; it is far from being strong enough to hurt them.

A woman in Virginia built a huge chicken-wire house, tall enough to stand in so that she could feed the birds and grow tomatoes inside without losing everything to the squirrels. On a smaller scale, commercially made hanging feeders surrounded by wire screen allow small birds to enter and feed, but exclude larger bully birds and squirrels.

A growing number of backyard birders have switched from sunflower seeds to safflower seeds in their bird feeders. They find that the change in diet is popular with cardinals, house finches, chickadees, nuthatches and mourning doves, but the safflower doesn't appeal to squirrels. 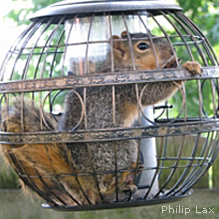 Some homeowners have simply learned to live with the squirrels – and actually feed them a safe distance from their birdfeeders. After years of battling them at their feeding station, trying nearly every type of feeder and seed, a couple in Boulder, Colorado, started feeding squirrels on the ground a distance away from bird feeders. Not only do they spend only a few dollars a month feeding the squirrels, the couple has found that pine siskins and other birds are also attracted to the feeding area on the ground.