As you sit down to dinner this Thanksgiving, consider the revenge that may be lurking in the woods . . . or on a nearby busy street 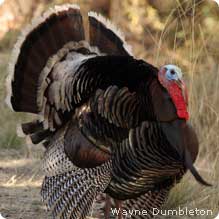 Once driven nearly to extinction in much of the United States, wild turkeys are back—with a vengeance. As growing populations of the birds move from forestlands into suburbia, big tom turkeys—or gobblers—are harassing homeowners, shoppers, baby-walkers, joggers, bicyclists, school kids and mail carriers in towns from coast to coast, often within sight of big-city skyscrapers.

The wild turkey is North America’s second largest bird after the trumpeter swan, and the toms are truly handsome creatures with feathers that shimmer in hues of red, green, copper, bronze and gold. A mature gobbler may stand 4 feet tall and weigh around 24 pounds, with wings spanning 5 feet.

Then there are the bird’s spurs—sharp bony appurtenances about 2 inches long, one on the back of each reddish orange leg. Toms use those spikes for defense or to establish dominance over other toms, but they can also leave a nasty gouge on a human arm or leg.

Communities near Boston, Massachusetts have become a hot spot for human-turkey encounters. In Brookline—a densely populated town next to Boston—mobs of wild turkeys roam backyards, halt traffic and occupy porches and decks where seed has spilled from bird feeders.

How did did the turkeys get there? And why are the males so aggressive?

“The flocks simply wandered down river corridors and power-line rights-of-way,” says Jim Cardoza, a biologist with Massachusetts Division of Fish and Wildlife “and people are changing wild turkey behavior by feeding them. They soon lose their fear of humans and incorporate us into their view of society. The lordly toms think they’re the boss, and humans are lower in the pecking order.”

The fall—and rise—of the wild turkey

Pilgrims in Plymouth, about 40 miles south of Boston, most likely dined on wild turkeys that legendary first Thanksgiving in 1621. The birds were abundant in New England forests in colonial times, but they were hunted to extinction in Massachusetts by 1851. By the early 1900s the species had been extirpated over much of its range.

Today some 6.5 million turkeys inhabit woodlands in 49 states and 6 Canadian provinces. The credit goes to management programs by wildlife agencies and, in the East, to the recovery of mature forest habitat. Massachusetts alone has an estimated 20,000 wild turkeys.

What should you do if confronted by an aggressive turkey?

You need to reestablish dominance, say wildlife biologists. Be bold. Chase them right back. Brooms and umbrellas are good turkey deterrents. So are BB guns and water hoses. And turkeys don’t like dogs.

Adapted from " The Case of the Terrorist Turkeys " by Les Line, National Wildlife , October/November 2008.