The Birth of NWF’s Habitat Program

A 1973 magazine article showed readers how to garden for wildlife 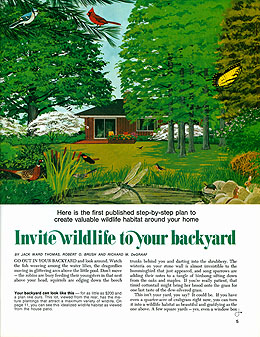 GEORGE H. HARRISON knew he was on to something. While serving as managing editor of National Wildlife in 1972, he heard about two U.S. Forest Service researchers in Massachusetts who were studying ways to convert suburban yards into mini-habitats for birds and other wild creatures. "Their study showed that the same basic principles wildlife managers had been using for decades—providing food, water, cover and places to raise young—worked beautifully on a smaller scale in backyards," says Harrison, the author of seven books about backyard birding.

Harrison convinced the two researchers, Richard DeGraaf and Jack Ward Thomas (who later served as chief of the U.S. Forest Service), to write an article describing the steps homeowners could take to create such habitats. That article, “Invite Wildlife to Your Backyard” in the April/May 1973 issue of National Wildlife, helped provide the basis for NWF’s Certified Wildlife Habitat® program, which celebrates its 40th anniversary this year.

During the past four decades, NWF has distributed thousands of reprints of the original article and certified more than 150,000 homes, schools and even entire communities as wildlife habitats.