Lessons from America's animal kingdom in how to be a superdad 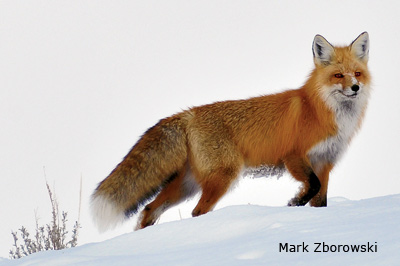 For the first month after a fox couple produces young, the female must stay in her den, doubling as a food source and thermal blanket for the babies, called kits. Dad's job is providing her with food every four to six hours until she can leave the den and start hunting as well. For the young, though, life is a free ride for about 90 days, as both parents cater to their needs. After three months, it's time for life's first harsh lesson as the adults start making the pups work for their grub: Fox fathers bury surplus food close to the den and disguise it with leaves and twigs, teaching the kits to sniff and forage and laying the groundwork for their adult roles as hunters.

Truthfully, there is not much competition. The male barking frog in the U.S. Southwest is the only North American frog known to pitch in with parenting. His contribution? He stays near the eggs until they're hatched, wetting them down with urine when they begin to dry out.

The phalarope—a shorebird that resembles a sandpiper—takes role reversal to extremes. The male makes the nest, incubates the eggs and cares for the young. His breeding plumage is also less colorful than his mate's, almost unheard of in the bird world. In the United States, northern and red-necked phalaropes nest in Alaskan tundra, and Wilson's phalaropes nest in inland marshes in the West.

During nesting season, a female jacana—a long-legged wading bird—will guard her territory from interlopers while her harem of males bustles with more domestic tasks: As many as four male counterparts are each building nests and rearing individual clutches of eggs laid by the female. Usually found south of the U.S. border, jacanas sometimes range into Texas.

According to evolutionary ecologist Sara Lewis at Tufts University, "Seahorses are the champions of paternal care. They are one of the few animals where the males are morphologically specialized to take care of the young." Talk about role reversal. After an elaborate courtship that includes sunrise swims along the ocean floor, the female inserts a tube inside the male's brood pouch and "impregnates" him with eggs. While she swims off, the male knocks his body against a plant or rock to settle the now fertilized eggs in his pouch. Depending on the species, during the next 10 to 30 days the male seahorse's belly swells with the growth of 10 to 300 offspring. Delivery can take hours as the young spring free and clumsily swim to hook themselves on nearby grasses. The male will then return to the same partner later that day to mate again. Seahorses can be found in all of the nation's shallow coastal waters.

The male sea catfish's mouth is his nursery, as he swims around with jaws full of eggs the size of marbles that he picked up shortly after the female laid them. This strategy precludes eating, so he lives off body fat for the month it takes the eggs to hatch and also for the two or three weeks his young need to grow into independence. Sea catfish inhabit temperate coastal and brackish waters in the northern Gulf of Mexico and southern Florida.

While paternal care goes against the norm in the insect world, the male giant water bug nevertheless shoulders his species' parenting burden: Once they've mated, the female essentially glues her eggs on the male's back. After he's loaded up with 150 or more eggs, the male water bug is totally responsible for them. He strokes the eggs to keep them clean. He executes a sort of deep knee bend to aerate the eggs. He sometimes sits at the water surface to dry them off and get rid of parasites. Within a few weeks, the eggs triple in size. Right before they hatch, the male stops eating to avoid consuming his offspring. Once his young hatch and scatter, the male ends his parenting session by kicking the egg pads off his back. He can have three more clutches before breeding season is over. Observant naturalists can see these behaviors in and near moving water in Florida and at higher elevations in the Southwest.

When the tide's in, the lumpsucker (a stout-bodied, tadpole-shaped fish found in northern U.S. coastal waters) isn't much different from other fish dads that aerate their eggs by fanning them with fins or tail. When the tide recedes, however, the lumpsucker goes the extra mile by staying put. He remains with his eggs by attaching himself to the rocks with a sucker formed from his pelvic fins, a kamikaze move exposing him to hungry gulls and crows.

The male great horned owl starts a family by establishing his territory and attracting a mate with his three- or five-hooter call. Then both partners go househunting for places like old squirrel nests, hawk nests or hollowed-out tree stumps. "I've even seen an owl take over a red-tailed hawk's nest," says ornithologist Richard J. Clark at York College of Pennsylvania. In late winter, the female lays two or three eggs, and the male's marathon begins. While she keeps those eggs from freezing, he brings home food in the form of rats, mice, squirrels and even prey as large as pheasants. In most bird species, says Clark, the female is the smaller animal, but not birds of prey. So the male great horned owl must feed himself and another adult about 25 percent larger than he. With two or three hatchlings crying for food, his burden multiplies. After about a month, however, the female starts to help hunt. This is a blessing for the male, because the fledglings will grow to be temporarily bigger than their parents and require as much as one-fourth their body weight in daily food intake.

In spring, the male three-spined stickleback gets domestic: Using twigs, plant debris and mucus as mortar, this resident of northern U.S. waters and the eastern North Pacific meticulously constructs bower-like nests. Once done, he turns to finding a mate. Advertising availability with a bright red belly and blue-green on his tail, he approaches a female and vibrates to signal his interest. To capture hers, he shows off his prime real estate. The process continues until a female enters his nest to lay eggs. Her role done, the male chases her out and swims through the nest to fertilize what she has left behind. He may even add to his brood by repeating the process with other females. Once he moves on to guarding his nest, the stickleback is a protective dad. He fans oxygen-filled water to the eggs with his fins. He removes eggs infected with fungus. He defends his young fry for the first few days of their lives. And he gathers wanderers in his mouth and spits them back into their nursery until they're ready to be off on their own.

And Who's the Worst Dad in the Animal Kingdom? ... The Grizzly Bear!

Deadbeat dads who desert their young are bad enough, but the grizzly bear actually kills cubs. To be fair, the grizzly is an equal-opportunity assassin. He goes after any cubs in his home range, an area as big as 1,200 square miles, where a half dozen females could be rearing young. "There's a good chance he's killing his own offspring," says biologist Harry Reynolds of the Alaska Department of Fish and Game in Fairbanks. A murderous male doesn't find it easy to get past mother bears, however--despite the fact that he is likely two or three times bigger than they are. Females with cubs are ferociously protective, and the more aggressive the female, the more likely she'll succeed in protecting her young. "This characteristic has obvious evolutionary advantages and may in part explain the species `personality' traits," adds Reynolds. Killing progeny seems counterproductive, evolutionarily speaking, so why does the grizzly practice infanticide? According to biologist Vic Barnes at Alaska's Kodiak National Wildlife Refuge, murderous males may be regulating the size of the bear population. Since females can have litters of mixed paternity, another theory suggests a male kills cubs so a female will come back into estrus and he can impregnate her again to better ensure passing on his genes. To Reynolds, neither theory seems conclusive. "Here's one thing we do know," he says. "Bears are successful because they are opportunists, eating anything from grasses to whale carcasses. If that food source is occasionally another bear, I doubt they stop to think about it."