Why Soft Paper Is Rough on Forests 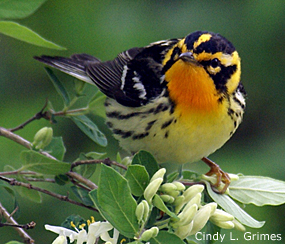 NEXT TIME YOU SHOP for toilet paper, before you reach for the soft stuff, consider the Blackburnian warbler (left). This splashy white, black and orange Neotropical migrant nests in the forest canopy—preferably of coniferous, old-growth trees—near the tip of a tree branch, where it secures its nest with a spider web. In the architecture of the forest, the bird has established itself in the attic and the roof.

The connection to shopping? The fluffy toilet tissue purchased by most Americans, and stocked in virtually all of our supermarkets, requires pulp containing long wood fibers found only in virgin timber (from live trees). When you use premium tissue, you flush down the toilet part of a tree that may have been felled solely for that purpose. And that tree may have been harvested from Canada’s boreal forest, where 57 percent of Blackburnian warblers breed—along with a third of all North American songbirds.

“When you clear-cut the forest, there’s no longer mature forest habitat for birds,” says biologist Jeff Wells of the Boreal Songbird Initiative (BSI). The continent’s complex, 1.4-billion-acre boreal ecosystem of trees, wetlands, rivers and tundra is also vital habitat for caribou, bears, moose, lynx and a host of other species.

Beyond providing wildlife habitat, the boreal is one of Earth’s great sponges for carbon dioxide, our most significant greenhouse gas. Together, the forests ringing the land masses at the top of the world store more carbon than any other terrestrial ecosystem. On the relatively cold forest floor, fallen trees and leaves pile up, preserved as if in a refrigerator, locking carbon in a layer that can be 10 feet thick. When many trees are cut, the land heats up—especially during summer when the sun barely sets—and begins to release carbon dioxide and other gases. “One of the great dangers of overcutting in fragile boreal regions is accelerating the release of stored carbon in the trees, soil and peat layers,” says Eric Palola, senior director of NWF’s Forests for Wildlife Program.

According to the U.S. Fish and Wildlife Service, an area the size of Connecticut is clear-cut from boreal forest each day. That’s five acres per minute. About two-thirds of the harvest is pulped for paper, mostly for newspapers, promotional mailings and catalogs. Only a small fraction is made into toilet paper. But it’s a fraction, say conservationists, that doesn’t have to be used at all—and it is not insignificant.

On average, each American uses about 23.6 rolls of toilet paper a year, 95 percent of them made with fiber from virgin timber. Although an increasing amount of this pulp comes from tree farms in the southern United States and other parts of the world, thousands of tons still come from boreal forests.

So, what is an environmentally conscious consumer to do? One good choice is to buy toilet tissue made from recycled paper. The Natural Resources Defense Council estimates that if every household in the United States replaced a single roll of virgin fiber toilet paper with a roll from 100 percent recycled paper, the wood saved would add up to 423,900 trees. The drawback is that recycled paper yields shorter fibers than virgin wood, which can make it feel coarser than the plush stuff. Manufacturers argue that Americans demand the softer paper, but many Europeans and others tolerate shorter fibers in their toilet tissue just fine.

Consumers who require plush tissue can choose toilet paper made from trees harvested in an ecologically responsible way. But this is where shopping can get tricky: In recent years, it has become fashionable to put green labels on the packages of a variety of household products. Not all of them live up to their claims, however, a practice known as “greenwashing.” NWF and other conservation organizations recommend looking for products whose environmental characteristics have been independently verified by reputable certification programs such as the Forest Stewardship Council (FSC). Says Ellen Adelberg, spokesperson for the Canadian Parks and Wilderness Society, “We’re strong supporters of FSC products, which require certification to quite rigorous standards, right through the chain of production.”

Responding to pressure from environmental groups, some major tissue manufacturers have begun to increase the amount of FSC-certified timber or recycled pulp in their tissue. “Although we still have a long way to go, the combination of market campaigns and better educated retailers and consumers has helped push forest practices in a better direction,” says Palola.

Conservationists concerned about boreal forests received particularly good news last spring. On May 24, the Forest Products Association of Canada—representing more than 20 major companies—announced an agreement with environmental groups pledging to adhere to the strictest standards of sustainable forestry on all 170 million acres it manages. The companies would stop harvesting entirely on another 70 million acres and consider establishing protected areas within them. BSI’s Wells calls the move “the single largest forest conservation agreement in history.” It came about, he adds, “thanks to consumer pressure resulting from the education efforts of environmental groups like NWF.”