How to Steer Birds Clear of Windows 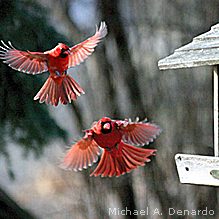 Window collisions with low-level structures like houses account for between 100 million and 1 billion bird fatalities in the United States each year, according to Daniel Klem, a professor at Muhlenberg College in Pennsylvania. His research has also shown that these collisions—which involve both migrant and resident species—occur during all seasons, all times of day and with windows facing any direction.

Many people don't even notice the birds dying beneath their picture windows. "Birds that are injured or dead will be scavenged a majority of the time," says Michael Mesure, program director for the Fatal Light Awareness Program, a Toronto-based group that documents and raises awareness about the problem. "Birds that fly away can also later die of their injuries. Many times they have broken beaks, which makes foraging impossible, or they die from a brain hemorrhage."

The long-term solution is to design glass that is less reflective, says Mesure. But in the short-term, he and other experts offer some advice for homeowners who want to minimize the number of bird-window strikes at their houses.

Make sure birds are not flying at full speed when they hit.

Many times window strikes occur after a scare from the neighbor's cat or a hawk scatters the birds at a feeder in all directions. House plants hanging on the inside or vegetation reflecting from the outside may mislead a hapless bird into thinking the area is a passage to safety. But if feeders, baths and other bird attractants are placed three feet or less from the window, no matter how fast the bird takes off, if it hits the window it will bounce to the ground, dazed but alive.

Tip: To help a bird while it recovers place a colander over the bird and weight it down so that it can't be tipped over by a predator.
Cover windows with netting during peak migration seasons

If it's not possible to remove or relocate bird perches and feeders, home owners can cover windows with netting, especially during peak migration periods. "Soccer-grade netting is best but it must be stretched taut so that birds don't get caught," says Mesure. "If they collide it will act like a trampoline and bounce them to safety."

Tip: An old storm-window screen hung outside the window will also work well.

Tip: Decals of falcons, owls or spiderwebs on windows rarely work. "When effective the decals become impractical, as they'd have to cover 80 percent of the glass," says Mesure. When using silhouettes, he recommends hanging them by chain or rope from an overhang so that they will stand out more by blowing in the wind.
Try interior coverings such as blinds and curtains

If you live in a high rise, this works well to warn birds on nighttime flights. For residential home owners, this will only make a difference when the sun is shining directly on the window.

The branches will reflect, but they'll also slow the bird down a bit.

Tip: Planting a shade tree or some shrubbery close to the window will serve the same purpose, as will an awning.
Hang streamers of shiny, reflective plastic ribbon or strips of black garbage bags in front of problem windows

"Anything that glitters and moves in the breeze will help prevent a bird from colliding with a window," says Mesure.

Let windows get a little grimy

"Don't clean them” says Mesure. “The dirtier the window, the less reflection and the more birds will see it as a solid object."

Visit our birds and birding archives.