What Is the World's Oldest Known Animal Species? 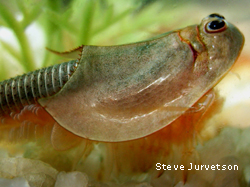 So just what is the world's oldest animal species?

Before answering that question, let’s consider what it means to be an old species.

Species tend to change through time. Genes mutate, physically changing a species until, viola, after enough mutations it becomes a different species altogether. Or habitat conditions change, and a species adapts to the new conditions over time, evolving into something new. This description is a vast simplification of a much more complex process, but for our purposes it will do.

Given that habitats tend to change over time, especially over millions and millions of years (ask a dinosaur), and given that genes tend to mutate whether asked to or not, it is not easy for a species to remain the same for millennium after millennium. A creature that does so has shown amazing adaptability and stability. It is a force to be admired, if not actually reckoned with.

Which is why it is such a major biological accomplishment that the world’s oldest known animal species is not 10 million years old, not 50 million, not 100 million, but 220 million years old! Or at any rate, fossils of it indicate that it has not changed its look—its external morphology, as a biologist might say—in all those years.

What? That doesn’t elucidate the matter for you? The very name Triops doesn’t bring images to mind? Well, we have to expect that this ancient life form would be something pretty obscure, given that today’s better known, more charismatic animals, such lions, tigers and rhinos, were not yet a gleam in evolution’s eye when Triops made its debut. Indeed, Triops was already a good 150 million years old when T. rex was terrorizing lesser fauna. We’re talking about early creatures here.

It’s also called a tadpole shrimp or a shield shrimp. Now an image comes to mind. A shrimp. With, perhaps, a shield. Precisely! The creature is rounded at one end, resembling a horseshoe crab in body, except that it has a longish, segment backend. A photo is worth a thousand words, and you probably don’t want to read another thousand words describing this creature, so please refer to the photo. Then come back, and we’ll discuss what it takes to last as a species for 220 million years.

First, you can’t ask much of the world. Keep your needs minimal. Shield shrimp live in ephemeral ponds (temporary ones that dry up), ditches, even puddles. They are not particular about the water—fresh or brackish will do.


And they are tough. They lay their eggs in water, and the eggs can survive freezing and, even more amazing, they can tolerate temperatures up to 176 degrees F, only 46 degrees short of boiling water. And they can withstand horrendous amounts of drying. If the water dries up, the eggs may remain fertile for 25 years (sometimes the eggs are sold in packets and can be revived and grown in an aquarium). They’ll lie in the dirt waiting for the next rainstorm to revitalize them, or they may be blown around by the wind. Even so, if they eventually get to water, they will hatch.


Once out of the egg, the young Triops can mature in just a few weeks, growing to about 1.5 inches long. It’ll have maybe three months to live, feeding on tiny aquatic creatures such as worms, frog eggs, other Triops—survivors can’t be choosey. They lay eggs, and the cycle begins anew, as it has for 220 million years. Note: Nothing was said to the effect that they mate and lay eggs. In fact, most Triops in the Northern Hemisphere are females—they outnumber males by at least 100 to 1 but, no problem, they can produce eggs that hatch without fertilization (if you look for Triops in the tropics, you will find more males than females).

As adults they are quite odd, to human sensibilities anyway. They have three eyes (hence the scientific name, which means "three eyes"), though one of them probably just senses light and dark. They may have as many as 140 legs, the most of any crustacean. But these legs ain’t just for walkin’. Some of the legs, through coordinated movement, flow water-borne food toward the mouth. Others have large breathing lobes that function as gills. The first two pairs of legs carry lobes with filament-like structures that act as sensory organs, not unlike antennas (which the shield shrimp also sport); these filaments bear chemical receptors that the animal uses for finding food. In females, the eleventh pair of legs have round capsules for carrying eggs.

Where to Find Them

Sixteen species of shield shrimp occur in temporary water bodies all over the world, but the animals may be rare in a given area. There are two basic types (genera) of shield shrimp, Triops and Lepidurus. Scientists credit Triops cancriformis as the oldest animal species. Other species may not be quite so old, but the natural histories of the species are similar.