For these wildlife athletes, speed, endurance and agility are a matter of life and death 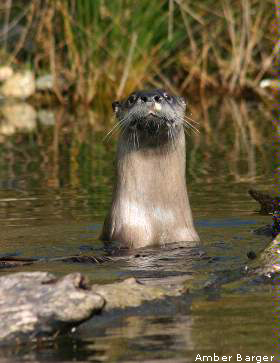 Human Olympians have amazing physical abilities, but for wild animals, strength, speed, agility and endurance are a matter of survival.  Here are some animal "Olympians" with gold medal-worthy abilities--vote for your favorite in our poll below!

This member of the weasel family would be a real contender in the bobsled or luge competition.  Known for their playfulness, otters often repeatedly slide down natural mud or ice chutes that they create along riverbanks, seemingly just for the fun of it.  Bears sometimes slide down snowy hillsides for fun too, but they’d only get the silver medal if they were up against slippery river otters. Read about the Southwest's missing otters.

The fastest animal on the planet is the cheetah, which can run at speeds over 60 miles per hour.  But even that doesn’t always ensure that this big cat gets a meal.  The gazelles and other small antelope that are the cheetah’s main prey are not as fast at the cat, but they have greater endurance and agility in a high-speed chase and often escape the spotted speedster.  The silver medal would go to the pronghorn, the planet’s second-fastest animal with a top speed that almost matches the cheetah’s.  Elite athletes improve their performance through competition with other top contenders in their sports, and the same is true for cheetahs and pronghorns: While today the felines are only found in Africa and parts of Asia, thousands of years ago they also roamed North America and hunted pronghorns.  Only the fastest pronghorns survived and, over many generations, the species evolved to be almost as fast as cheetahs.

Aardvarks are a double threat.  First, these strange-looking mammals are incredible diggers.  They use their long claws and strong forelegs to excavate burrows where they sleep and hide from predators.  One aardvark can dig a tunnel in the hard African soil faster than a team of humans with shovels.  They also dig into cement-hard termite mounds and ant nests to get at the insects, which make up the majority of their diet.  Second, they have gold-medal-worthy tongues.  Sticky and up to one foot long, these tongues help aardvarks gobble down tens of thousands of the scrambling insects in just one night—an impressive (if somewhat gross to humans) feat. 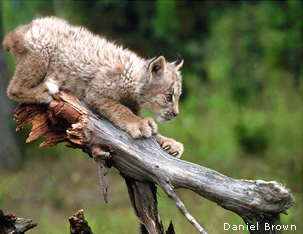 When it comes to ability to navigate deep snows, it’s anyone’s guess whether the lynx or the snowshoe hare would take the gold.  Both predator and prey have huge feet that act as snowshoes, allowing them to get around in several feet of the white stuff without sinking.  The hares have the extra advantage of their pure white winter coat, which provides excellent camouflage in their frozen habitat, but even that doesn’t always save them from the lynxes’ exceptional agility, hearing, eyesight and sense of smell.

These tiny primates live in the treetops and have incredible leaping abilities.  As they prowl tropical forests at night looking for fruits and insects to devour, bush babies can make leaps of 20 feet or more, which is many times their own body length.  Not only are they great jumpers and acrobats, they also move in complete silence and can see in almost absolute darkness with the help of their huge eyes.

Foxes take the gold for their exceptional hearing.  In winter, red foxes can hear mice and voles tunneling under deep snow with such accuracy that they can pinpoint exactly where the furry mouthfuls are and pounce on them without even seeing them.  And it’s not just in snowy environments that foxes put this hearing to use.  Fennec foxes of the Sahara desert use their huge ears to locate prey on the darkest of nights, sometime even when that prey is underground.  A fennec’s giant ears also allow this fox to shed excess body heat, helping it survive the scorching desert temperatures. 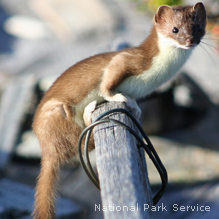 Spotted hyenas have incredibly strong jaws, which they put to good use in the game of survival.  Hyenas can literally consume every part of their prey—including bones, horns and teeth!  But contrary to popular belief, hyenas wouldn’t win a medal in a biting competition among mammals.  Recent research has shown many mammalian carnivores have a stronger bite force quotient than hyenas, including gray wolves, lions and even giant pandas (which don’t even regularly eat meat, instead feeding primarily on tough bamboo, which requires strong jaws).  The tiny least weasel would take the silver, although it would be the gold-winner among North American mammals.  The gold medal would go to Australia’s Tasmanian devil, which has a bite force quotient higher than any other living mammal. Read more about the least weasel's super-strong bite, and find out why the Tasmanian devil faces a devil of a problem.

These arboreal lizards are special because, as their name suggests, they use their long, thick tails to cling to and hang from branches.  Unlike some other lizards, prehensile-tailed skinks can’t drop their tails when attacked.  Though they lose out on the ability to escape while a predator is preoccupied with eating the dropped tail, they make up for it with the incredible strength of their tails, which are strong enough to support the entire weight of their entire 2 ½- to 3- foot body.  That’s sort of like a person hanging from a branch with nothing but a pinkie finger.  That kind of strength would put any human athlete to shame! 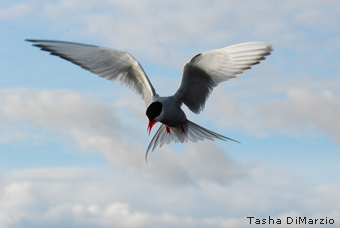 When it comes to long distance endurance, there’s a heated rivalry between two seabirds.  For years, the Arctic tern held the title of the bird with the longest migration, traveling from the Arctic all the way to the Antarctic, and back again, each year.  Then, scientists discovered that the sooty shearwater also has an impressive migratory journey, beginning in New Zealand and ending in the North Pacific.  Each bird was estimated to travel over 40,000 miles annually.  However, a recent study reports that the Artic tern can go as far as 50,000 miles, making it the favorite in this year’s Wildlife Olympics.  But who will take the gold and who will settle for the silver is anyone’s guess!  One thing is sure, compared to these two avian migrants, the Pacific gray whale, the longest-migrating mammal, can only hope for the bronze: The whale makes a maximum roundtrip journey of only 12,000 miles each year.

NWF spokesman David Mizejewski is a lifelong naturalist who lives in Northern Virginia. He appears regularly on radio and television programs, including NBC’s Today Show.