From birds to amphibians to humans, animals have developed strategies for keeping cool in hot weather 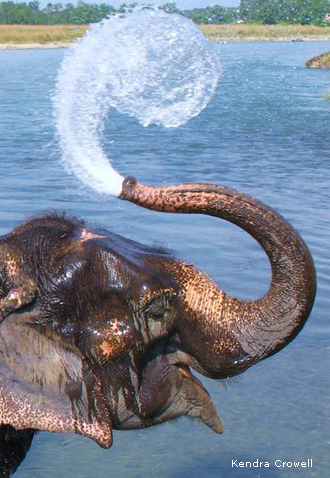 People do it, and so do horses. Sweating helps animals cool because drying sweat cools the skin. Some canines—members of the dog family—sweat from their feet, but that is not a large enough surface area to cool the whole animal. What do dogs do? See panting, below.

Elephants can radiate heat from their ears, which they hold out from their bodies; jackrabbits do the same thing with their long ears. Blood flow into the ears carries heat out of the body, and cooler blood re-enters the bloodstream, reducing the effects of heat.

This is the opposite of hibernation. Some animals, such as toads and snails of various species, will go into a state of dormancy (call it sleep, but it is much deeper than sleep) during hot weather, to avoid heat and drying; they may burrow underground, just like a hibernating ground squirrel (hibernation is a winter dormancy to escape cold and hunger). Probably the most famous estivators are the lungfish of Africa, Australia and South America, which burrow into the mud of drying lakes and create a cocoon of mucus for shelter; they revive when rains refill their lakes.

Many animals seek shelter during the hot part of the day. Reptiles such as lizards and snakes are especially susceptible to heat and can die after only a few hours’ exposure to hot summer sun; these animals seek shelter under rocks and in burrows. The survival of some lizards is threatened because of heat: A recent study shows that rising temperatures from global warming have driven 12 percent of Mexico’s lizard populations to extinction and have caused lizard population losses on five continents because the animals have to spend so much time hiding from the sun that they are not feeding and breeding adequately. Turtles, which also are reptiles, will go into deeper water during heat waves. Freshwater fish such as bass also seek cooler, deeper waters during summer heat. Cats sweat through their feet, but not enough to help them cope with summer temperatures. Felines, from the house variety to the mighty lion, seek shade when they want to cool down.

As we all know, our breath is hot—hot enough to make clouds in winter air. Many animals get rid of excess body heat by breathing rapidly—by panting. Almost everyone has seen dogs do this. Have you ever seen birds walking around in summer with their beaks open? They’re panting. Birds have an elaborate breathing system that includes air sacs in addition to lungs and that helps them get rid of excess heat by panting.

Losing body hair is a major way that mammals—most of which are covered with fur—cope with heat. In winter, animals in temperate zones put on heavy coats for combating frosty cold and biting winds, but in summer they need lighter wear. Hormones in the body cause their dense winter coats to fall off, usually in patches, to be replaced with a lighter summer coat. 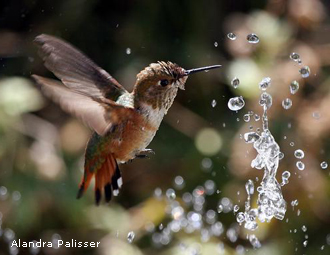 Many animals seek water to cool down. Elephants often cool off in a pond or stream. Tigers (unlike most house cats) enjoy a dip in hot weather. Domestic pigs, which don't sweat, wallow in water or mud on hot days; mud also protects them from sunburn. If you provide water for backyard wildlife, you will find that birds, too, like to splash around, both to cool off and to clean feathers and skin. Other backyard animals, such as toads and turtles, will also benefit from access to water, especially as temperatures climb.

Extremely hot summers will become the norm by 2050 if global warming pollution continues to increase unabated. For example, Washington, D.C., which has a historical average of fewer than 30 days annually over 90 degrees F, is projected to have 55-100 days annually over 90 degrees F by 2050, depending upon how much emissions are curbed. Absent significant action to reduce greenhouse gas emissions, the story would be much the same across the U.S.

And it's not just humans taking the heat. Polar bears are having to swim longer distances due to melting sea ice. Pikas are losing more and more suitable mountain-top habitat. And the list goes on.

Find out more about what you can do to help wildlife >>

Read more about wildlife behavior on the Animals home page.
Keeping cool near water? Check out our water photography tips.
Create a garden for wildlife by providing water and other habitat elements.
Find out more about North America's animals in our Wildlife Library.