The Continuing True Saga of Dorothy, a Loggerhead Sea Turtle in the Gulf of Mexico

Researchers call her Dorothy, and her odyssey has taken her from the safety of the Florida Keys and into the vicinity of the BP oil disaster 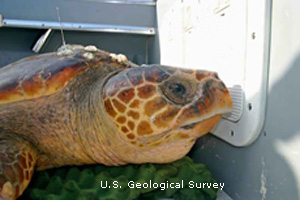 Getting Ready to Recapture Dorothy

Kristen Hart, a biologist with the U.S. Geological Survey who since June has been tracking the young loggerhead sea turtle named Dorothy, has received federal permission to recapture and examine the long-traveled reptile.

Dorothy was captured and satellite tagged this summer in the Dry Tortugas, about 70 miles west of Key West, Florida. After a two-month swim she appeared south of the Louisiana’s Chandeleur Islands, about 30 to 40 miles from the wellhead at the center of the gulf oil disaster.

Federal permission to recapture and sample Dorothy has been granted only through December 31. “I am trying to make something work for the last 10 days of the month,” Hart says. “Because of where we know she’s been [close to the Deepwater Horizon wellhead], I would resample her blood and tissue and of course take measurements and photos and check the satellite tag.”

One important measurement Hart will collect is Dorothy’s carapace length, because it provides an estimation of maturity. The minimum carapace length for a nesting loggerhead is about 35 inches. The last time Hart had a chance to measure Dorothy, her carapace was about 6 inches too small.

Hart has invited NWF staff to join the recapture expedition. If possible, we’ll try to bring you photos and video from the voyage.

Is Dorothy lost, or just heading for home?

Ever since she was tagged last June off the Dry Tortugas (see earlier entries below) , about 70 miles west of Key West, Florida, Dorothy the loggerhead sea turtle has been something of an odd duck.

According to data gathered by U.S. Geological Survey biologist Kristen Hart and other researchers over the years, sexually immature loggerheads from the Dry Tortugas generally take an ocean voyage, using the North Atlantic gyre, a clockwise-rotating current, and spend an estimated 10 to 12 years at sea while they mature. Then they return to nest on their home beaches.

But when she was released, Dorothy proceeded to swim north up Florida’s coast and turned west along the panhandle. For nearly two months now, she has been living in the Gulf of Mexico about 30 miles from the Deepwater Horizon well head, which blew a 206-million-gallon mix of crude oil and methane gas into gulf waters. She’s been staying close to Chandeleur Island, an area hit hard by the Gulf oil disaster.

Hart had presumed when tagging Dorothy that the turtle had been born in the Tortugas and would nest there. Now Hart thinks Dorothy may in fact have hatched in the Chandeleur area. “It’s possible I captured Dorothy as she returned from her Atlantic journey,” Hart says. “Maybe she was on her way home to the Gulf Islands rather than having arrived home in the Tortugas.”

So is Dorothy lost, or has she found her home?

Sea turtles have a long history of nesting on the now-oiled beaches of the Gulf Islands National Seashore and Chandeleur Island, so she may be heading for the sands where she hatched. On the other hand, Dorothy is still a bit small for nesting.

Hart is seeking permits to recapture Dorothy, take size measurements, sample her tissue and blood, and check her satellite transponder. As Dorothy reaches nesting size and age, it may turn out that she’s not so wayward after all.

Dorothy, the loggerhead sea turtle being satellite tracked in the Gulf of Mexico by U.S. Geological Survey biologist Kirsten Hart, turned up from October 15 through 17 in the form of spotty signals.

The new data suggest that she is swimming away from the Deep Horizon wellhead, placing her an estimated 60 miles from the capped BP oil well that spewed some 206 million gallons of crude oil into the gulf.

Dorothy is zigzagging over an area of deep, uneven crevices in water about 200 feet deep--just the kind of places loggerheads seek for safety or to take a snooze.

“I think the right oceanographic conditions are there for Dorothy,” says Hart, who is tracking 10 other sea turtles as well. “They’re benthic [sea bottom] feeders, and maybe the prey is not that far off the bottom. Maybe the dive depth isn’t that great for her. And the crevices might provide the right kind of hiding spot or refuge that’s out of the currents.”

Dorothy has paddled almost 1,500 miles since being tagged last June 5. She’s now about 490 miles on a straight line from her Dry Tortugas home, where Hart suspects that the pre-adult turtle may have hatched a few years ago.

The latest report on the loggerhead sea turtle called Dorothy (for a previous entry about the Dorothy's continuing saga, see below) indicates that she is swimming closer and closer to the Gulf of Mexico’s danger zone—she was last located only a little more than 50 miles from the site of the BP oil spill.

According to Kristen Hart, the U.S. Geological Survey biologist who has been tracking the sea turtle since last spring, Dorothy’s satellite signal was lost last summer for a month, then reappeared in early September. Since then, Hart has received the signal weakly and intermittently--it sometimes vanishes for several days at a time. But it came in recently for five straight days, from October 5 to 10.

Dorothy has moved slightly southward. She had been swimming some 20 to 30 miles east of the southern tip of Louisiana’s Chandeleur Islands but is now about 30 miles south of the island chain--meaning that she is moving ever closer to the site of the now-capped Deepwater Horizon oil well that was the source of the gulf oil-spill disaster.

Dorothy is living in waters 100 to 250 feet deep in an area where the sea floor is laced with oil pipelines and heavy cabling. Hart is hoping to recapture her to gather blood and tissue samples.

Like her Kansas farm-girl namesake in the Wizard of Oz, Dorothy lived a simple life. A young female loggerhead sea turtle , she swam the clear seawaters of Dry Tortugas National Park, which lies at the west end of the Florida Keys, feeding on lobsters, crabs and other marine crustaceans. Still too young for breeding, she would not visit land for several years, coming ashore, as sea turtles do, only to lay eggs.

One day last spring, not unlike Dorothy in Kansas, she was swept up by forces beyond her control: U.S. Geological

Survey biologist Kristen Hart, who is doing research on sea turtle migration and nesting patterns, captured Dorothy and tagged her with a satellite tracking device.
A Wayward Loggerhead

Hart thought Dorothy might stay in the park area, where the marine reptile would be recaptured and reevaluated over time. Hart added Dorothy’s data to a 3-year record of sea turtle information that grows with each of Hart's Tortuga sampling trips. The record will prove invaluable to understanding sea turtle distribution within the Dry Tortugas and throughout the gulf, thanks to satellite tracking. Hart hopes that Dorothy’s habitat-use information, in particular, will help to quantify long-term impacts on threatened and endangered sea turtles jeopardized by the gulf oil disaster.

Destin is a resort city on the western end of the Florida Panhandle. Dorothy's route was unusual. Not one of Hart’s tagged sea turtles has ever moved into the northern Gulf of Mexico.

Dorothy didn't linger long in the green waters of Florida’s Emerald Coast. From Destin, she headed west—straight toward America’s worst oil disaster, the BP spill that sent 206 million gallons of sticky oil into the gulf and that resulted in the use of tons of chemical dispersants in gulf waters.

Then she disappeared. For more than 30 days, Hart received no signals from Dorothy’s satellite tracker.

"I thought something happened to her or maybe the satellite sensor got fouled over with oil," Hart recalls. "Then, on September third, I started getting her signal again, near the Chandeleur Islands."

The Chandeleurs are a 50-mile-long chain east of New Orleans. Devastated by hurricanes Georges, Dennis and Katrina, the Chandeleurs  were among the areas hit hardest by the gulf oil disaster.

Since her reemergence, Dorothy has kept everyone guessing about what she is doing where. "I'm getting spotty transmissions," Hart says. "I'll get a signal for a couple of days, then nothing. Then she's back."

Dorothy’s satellite tag provides a record of the waters through which she passes and sets up the possibility of recapturing her someday. "I'd love to go find Dorothy, to figure out if we are seeing any artifacts from her being so close to the spill,” Hart says. "Loggerheads are crustacean eaters and are not doing so well anyway. Eating oiled food is not going to be such a good thing either." Dorothy may help Hart to understand the oil spill's immediate effects on the loggerhead species, a creature federally listed as threatened, though its dwindling numbers have led NWF and other conservation entities to push for endangered status.

Whatever secrets Hart gleans from Dorothy’s saga will be reported here in the continuing tale of the wayward loggerhead.