Experts have spent decades studying the dangers oil development may pose to whales; now the day of reckoning has arrived 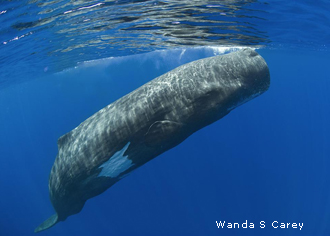 FOR YEARS NOW, biologists have feared that oil development in the Gulf of Mexico could harm sperm whales. A small population of fewer than 1,500 sperm whales lives in the gulf year-round; the species was much more numerous there before whaling put a dent in its numbers. Federally listed as endangered, the whales spend much of their time along the continental shelf and in the Mississippi Canyon, a region of deep water off the river delta where prey—mostly fish and squid—congregates. Females and juveniles in particular reportedly favor this area.

Studies have found that these whales comprise a distinct population. They use combinations of calls different from those of other sperm whale populations and are smaller in size, probably an adaptive response to the limitations of their habitat and its food sources.

Oil and Sperm Whales in the Gulf

During the past decade, oil companies have been drilling in increasingly deeper waters. The Gulf of Mexico is studded with 4,000 offshore oil platforms and holds 25,000 miles of active petroleum pipeline; the platforms and various exploratory activities are focused on the Mississippi Canyon and continental-shelf edge favored by sperm whales.
Consequently, the federal Mineral Management Service, which grants drilling permits to oil companies, has administered several studies during the past few years to understand how whales behave in the Gulf. “We first started this directed sperm whale work in 2000, and that is because industry was moving into the waters out there, and we frankly needed to know are those kind of activities a determent or an impact to sperm whales,” Carol Rodin, an official with the service, told a reporter for Mississippi Public Broadcasting last March. These studies were funded by the oil industry, however, and yielded reportedly inclusive results about the potential dangers that oil development poses to gulf whales. Moreover, in 2004 some studies were canceled or reduced in scope by the service and its industrial partners. However, late last winter federal researchers did sail the gulf to collect data on sperm whales and particularly on their prey species.

Studies suggest that loud sounds used by the oil industry to detect oil deposits under the gulf floor may interfere with the whales’ use of sonar to locate prey. To avoid conflicts with hunting whales, the oil industry said it would not use its noisy exploratory techniques within a third of a mile of sperm whales.

The oil spill poses several threats to sperm whales and to other whale species in the gulf, as well as to dolphins. Oil floating at the surface can emit toxic fumes that surfacing whales and dolphins will breathe. Oil can coat baleen—comblike growths in the mouths of toothless whales used for filtering prey out of ingested water—and make it ineffective for capturing prey.

For sperm whales, which are not filter feeders, the biggest threat from the spilled oil and from the toxic chemical dispersants used by BP to break up the oil is the harm that may be done to prey species deep under water, where the spill is originating. Even if not killed outright, prey animals are likely to absorb the toxins and pass them on to the whales. This factor could impair reproduction in both whales and their prey.

“The spill is from the Gulf floor, so contaminating the entire water column, from top to bottom, is a very grave concern for all marine life in the area,” says Doug Inkley, NWF senior scientist. Experts believe that an average of only 2.8 human-caused sperm whale deaths a year could jeopardize the species’ recovery from endangered status, according to figures cited recently by a New Orleans online news service.

Roger Di Silvestro is a senior editor at National Wildlife.

What is a sperm whale?

Also called the cachalot, the sperm whale is the largest of the toothed whales, reaching up to 60 feet long. You can generally tell it from other large whales because it has a distinct, bulbous, almost rectangular head that accounts for about a third of its body length.

These creatures were heavily pursued by whalers in the 19th century, because their massive heads are filled with oil that can be used as a lubricant and as fuel for lamps. Now listed as endangered under the federal Endangered Species Act and safe-guarded by the Marine Mammal Protection Act, the sperm whale occurs in seas throughout the globe and numbers perhaps 300,000 individuals worldwide, according to the American Cetacean Society, still only a fraction of the estimated 1.1 million before whaling took its toll. These whales can dive as deep as 10,500 feet—almost 2 miles—and stay under for more than an hour.

The most famous—or infamous—cachalot is Moby Dick, Herman Melville's fictional white whale. Moby Dick was inspired by the real-life sinking of the Essex, an American whaling ship, by a sperm whale that was under attack by the whalers.

Other whale relatives in the Gulf of Mexico

In addition to sperm whales, other cetaceans (whales and dolphins) living in the Gulf of Mexico, and put at risk by the oil spill, are: