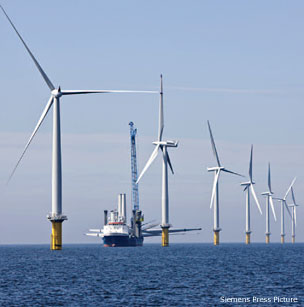 The natural disaster that struck Japan earlier this year should serve as a wake-up call for the United States that our own energy systems are highly susceptible to sudden catastrophes. That’s one of the messages of a recent NWF report, which examines how climate change is increasing the incidence of severe weather and threatening the nation’s energy systems, economy and national security.

As More Extreme Weather and the U.S. Energy Infrastructure points out, intense climatic events already cost U.S. taxpayers $17 billion a year on average, and those costs are likely to rise as the nation faces more heat waves and powerful storms. While there is no way to prevent earthquakes and tsunamis, the report says, the nation can avoid the worst consequences of global warming by reducing carbon pollution and taking steps to prepare for anticipated impacts.

“Our hospitals, homes and economy depend on an energy infrastructure that will be increasingly disrupted by severe-weather events,” says Amanda Staudt, an NWF climate scientist and author of the report. Unfortunately, she notes, the nation is doing far too little to make its power systems more resilient and secure.

The concerns raised by the report echo previous warnings by national security experts. In a 2009 study, for example, the Center for Naval Analyses Military Advisory Board concluded that “fossil fuels, as well as the nation’s fragile electricity grid, pose significant security threats to the country as a whole and the military in particular.”

Among the NWF report’s key findings: Major weather-related power outages are becoming more common in many areas of the country; oil and gas infrastructure in the Gulf of Mexico region is at risk as hurricanes and tropical storms intensify; electricity generation in the Southwest will be limited by water shortages and more extreme heat; and flooding will disrupt coal transport in the Midwest and Northeast.

“Utilities that require enormous amounts of water to run their power plants are especially vulnerable to drier and warmer conditions,” says Mindy Lubber, president of Ceres, an investor sustainability group based in Boston. That point, she adds, “has not been lost on many investors, who have filed a record number of shareholder resolutions with utilities this year demanding answers on how they are managing this issue.”

To help alleviate future problems, the report recommends that the nation initiate several steps, including: conduct a detailed national climate vulnerability assessment of the energy industry; develop plans for the energy industry to adapt to climate change and to address vulnerabilities; design, strategically locate and invest in more resilient, less-polluting, less water-dependent energy systems such as appropriately-sited offshore wind (above) and distributed photovoltaic solar systems; and improve the energy efficiency of buildings, vehicles, appliances and industrial processes.

NWF’s Wild Animal Baby Explorers® television series, which introduces preschoolers to the world of wildlife, recently was honored with the Parent’s Choice Foundation’s Gold Award for the high educational and entertaining quality of its episodes. A Spanish-language version of the series also is being aired to U.S. Hispanic households.

NWF’s 47 state affiliates are actively involved in a wide range of conservation efforts across the country, including:

To protect vital wetlands, rivers and groundwater, the Nebraska Wildlife Federation (NEWF) has initiated a campaign to educate the public about issues surrounding the proposed Keystone XL pipeline, which would carry highly toxic tar sands oil from Alberta, Canada, through the state’s scenic Sandhills region to refineries in Oklahoma and Texas. NEWF also is pushing federal authorities to examine the climate and environmental implications of the project.
In response to concerns about water quality and discoveries of contaminated fish in the Potomac River watershed, the West Virginia Rivers Coalition has set up a program that allows residents to dispose of unwanted and expired medications properly at various collection sites. Such medications can contain chemicals that adversely affect the environment and wildlife when introduced in water systems or landfills.
In an important legal victory, the Natural Resources Council of Maine and its partners won a major court case recently, bringing a halt to a controversial development project in the pristine Moosehead Lake region while state regulators thoroughly examine the plan.
Lawsuit Filed to Protect Imperiled Grasslands

NWF filed suit in federal court in April against the U.S. Environmental Protection Agency (EPA) for its failure to enforce laws that protect threatened grasslands from destructive and unnecessary agricultural development.

Under the Clean Air Act, EPA must set standards each November for the following year, requiring that transportation fuel sold in the United States contain a certain amount of renewable resources. Under the law, Congress recognized the need to protect the less than 5 percent of remaining U.S. native grasslands by limiting corn and other crops harvested for use as biofuel to agricultural lands. EPA, however, has adopted a plan that allows fragile and federally protected grasslands to be destroyed for biofuel production.

“Plowing up our nation’s last remnants of native grasslands to grow more corn for ethanol is like burning the Mona Lisa for firewood,” says Julie Sibbing, NWF director of agriculture programs. “We are shocked that the EPA would choose to ignore this statutory prohibition, further exposing grassland birds—the fastest declining group of birds in North America—to more habitat destruction.”

Converting grasslands for biofuel production will create irreversible damage, Sibbing says, imperiling species such as the sage grouse and the prairie chicken as well as many songbirds. “Our lawsuit seeks to ensure that federal renewable fuel requirements are met in a way that protects natural ecosystems from damaging conversion to agricultural land,” Sibbing says.

Going on Safari with Ranger Rick

As part of its Be Out There™ campaign to connect children with nature, NWF is partnering this summer with the Tennessee Aquarium in Chattanooga to bring the Federation’s icon Ranger Rick® for the first time into an interactive museum exhibit that entire families can enjoy. The exhibit, Ranger Rick’s Backyard Safari® features live animals and entertaining workshops on how people can create Certified Wildlife Habitats® in their own backyards. Natural Encounters, Inc. a presentation company that works with zoos and aquariums worldwide to produce educational animal programs, also is partnering in the project.

“This partnership gives us a wonderful opportunity to teach youngsters that we all have a responsibility to protect and preserve nature, starting with the natural spaces that surround our homes,” says Meri-Margaret Deoudes, NWF vice president of corporate relations and events.

Chula Vista, California, was recognized by NWF earlier this year as its 53rd Community Wildlife Habitat™. To date, more than 300 homes, schools, businesses and public facilities in San Diego County’s second largest city have been officially certified by the Federation as wildlife habitats.

For more information about the program, visit www.nwf.org/community.

Each year, NWF recognizes innovators of global warming solutions at educational institutions across the country through its Chill Out™—Climate Action on Campus awards. This year, five colleges and universities and one high school were honored for their creative approaches to developing on-campus sustainability programs.

“These young innovators and their instructors have proved it is possible to significantly reduce the pollution that is fueling global warming,” says Jeremy Symons, NWF senior vice president for conservation and education.

For all the winners and more about the competition, see www.campuschillout.org.

“Our children, our wildlife and future generations are being sacrificed to satisfy polluter special interests who want free rein over our air and water,” says Catherine Bowes, NWF senior policy representative. “It is time for lawmakers to update our standards for toxic air emissions.”

EPA has proposed new regulations to cut mercury pollution from power plants, sources of about half the nation’s emissions of the dangerous contaminant. Mercury is a neurotoxin that adversely affects the function and development of the central nervous system in both humans and wildlife, says the report.

NWF and four other conservation groups have brokered a water-use deal that helps Houston meet its needs while protecting Galveston Bay, a Texas estuary that ranks among the nation’s most productive.

The city of Houston applied in 2004 for a state permit to indirectly reuse all of its current and future wastewater discharges—some 600,000 acre-feet—by drawing them back out of local streams and bayous. Loss of this fresh water, which otherwise would flow into the bay, could harm the estuary, and NWF and its partners challenged the permit.

Projected population growth for Houston suggests that the city will need an additional 1.1 million acre-feet of water annually within the next 50 years. “Treated wastewater is a good source for increasing supply,” says Myron Hess, an attorney for NWF’s South Central Regional Center in Texas. “But we also have to meet the needs of the natural environment, or we’ll face devastating losses for commercial and recreational fishing industries.”

Even without the new permit, the city has the option of directly reusing 100 percent of its waste water without ever discharging it. The new deal strikes a balance by committing the city to releasing into the bay at least half its treated wastewater.