Getting Through Winter: Four Animals that Flirt with Freezing

Some animals survive subfreezing temperatures by just giving in, even it if means freezing as solid as ice 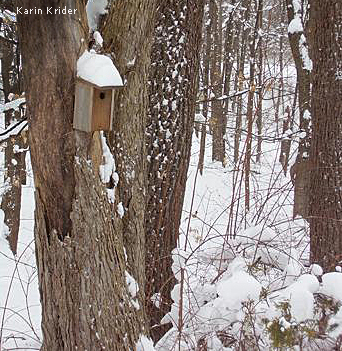 Many animals, from wolves and bears to the family dog, growth thicker coats for winter. Some, such as walruses and whales, favor an insulating layer of blubber. Birds may migrate to warmer climes. But not all animals fend off the big chill. Some just give in and, well, freeze.

This large shark species—it can grow up to 24 feet long, putting it in the same league as the great white—inhabits the depths of the Atlantic to at least 7,200 feet and swims under the polar ice cap, enduring temperatures as low as 28 degrees F (the sea salt allows marine waters to drop below the freezing point for freshwater).

It survives this cold because its cells contain a natural anti-freeze, an ammonialike compound called trimethylamine oxide, that wards off ice crystals that would form in the animal’s cells if tissues and organs were allowed to freeze—with fatal results for the shark.

This anti-freeze makes Greenland shark meat poisonous to humans and other mammals. Anyone who eats fresh Greenland shark meat may fall into a stupor and be unable to stand. A large enough dose can cause convulsions and death. But the meat can be rendered safe by boiling in several changes of water or burying and fermenting for several months. After such treatment, the Inuit safely feed the meat to their dogs.

Other fish also are protected from intense cold by their own internal anti-freeze. Icefish living in the chill continental-shelf waters surrounding Antarctica survive because their cells contain anti-freeze proteins, or AFPs, that keep ice crystals from damaging cells. Related chemicals help other cold-water fish, including smelt, herring, winter flounder and northern cod.

Kin to the familiar woolly bear caterpillars of temperate areas, which are Isabella tiger moth larvae, Greenland woolly bears on Canada’s Ellesmere Island live through one of the longest, coldest winters on the planet. They do this in part by being active only for one month a year: June.

They go into dormancy in late June or early July, sheltered in cocoons they attach to rocks until June rolls round again. January and February are brutally cold, down as low as -95 degrees F. The cocoons are like little greenhouses, oriented on a northwest-southeast axis to maximize absorption of heat from the sun and to minimize loss of heat to prevailing wind.

Life is slow for this hibernator, which may not turn into a moth until its fourteenth year, making it a relatively long-lived insect. But most extraordinary of all, the Ellesmere caterpillars survive the cold by actually freezing, including their stomach contents, blood and the fluid among their cells, tolerating the ice crystals that threaten the lives of other species. Amazing as that strategy is, a worm called the Antarctic nematode goes a step further, letting the fluid within its cells freeze, though the cell nuclei remain unfrozen. Exactly how they pull this off without dying remains unknown. 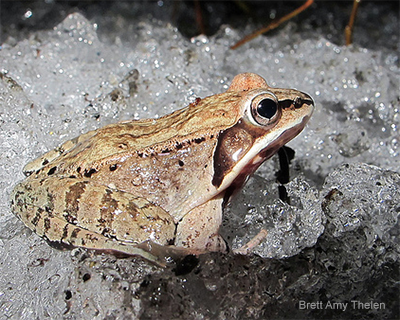 Alaska is home to one species of toad and two species of frog, one of which is the wood frog, the most widespread of Alaska’s amphibians and one of the planet’s most cold-tolerant species—it can actually freeze solid, live in suspended animation through winter and thaw out in spring as temperatures warm.

Growing to a maximum of about 3 inches long, wood frogs hibernate in shallow depressions under dead vegetation, with snow cover for additional insulation.

When the winter freeze arrives, the wood frog’s cells and organs begin pumping out much of their water, filling spaces between cells and in body cavities. Large amounts of glucose, a sugar created in the liver, enters the dewatered cells, creating a syrupy solution that functions as an anti-freeze. Only a few hours after freezing sets in, ice fills the abdominal cavity and encases all internal organs, flat ice crystals form between layers of skin and muscle, and the eyes turn white as the lens and fluids freeze. Nearly 70 percent of the frog's total body water is converted to ice. The blood freezes, the heart stops beating, all breathing and muscle movements stop, even the brain freezes solid. Up to two-thirds of the water in a wood frog’s body can turn into ice, but when spring brings the thaw, the frog revives. Males start their mating calls when temperatures are barely above freezing.

This tiny (no larger than 0.059 inches long, depending on which of the more than 1,000 species you are measuring), eight-legged animal lives on mosses and lichens and can be found from the Equator to the poles, from the highest mountains to the deep sea. Under a microscope, it looks like a wrinkly caterpillar with four to eight claws at the end of each leg.

Despite its looks and size, it’s the world’s ranking winner at cold survival—it can stay alive (though only for a few minutes) at -459 degrees F, which is about 1 degree above absolute zero. It does this by being one of the few creatures that can survive a drop in its metabolism to 0.01 percent of normal and decrease its water content to 1 percent.

But it can take more than cold. Hearty water bears can withstand the vacuum and high radiation of outer space for at least 10 days (humans can take no more than 10 gamma-rays of radiation; water bears can survive 6,200); the pressure of the deepest sea, some 6,000 times that of the Earth’s surface (14.7 pounds per square inch); and dehydration for nearly a full decade. If you want to see one for yourself, there is an easy way to collect them.