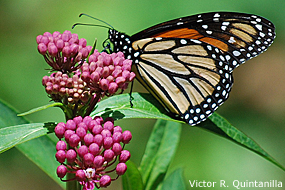 
WHAT’S A FEMALE MONARCH butterfly to do when she’s infected with the deadly parasite Ophryocystis elektroscirrha, which can be passed on to her young? New laboratory research from Emory University suggests she will lay her eggs on a species of milkweed that produces chemicals toxic to the parasite. Monarchs are famed for depositing eggs on milkweeds that in turn become food for their young, which absorb plant chemicals that give the insects a bitter taste discouraging to predators. In the lab experiments, infected females preparing to lay eggs selected particular milkweed species that would provide larvae with chemicals for killing off the parasites, while uninfected females showed no such preference. “We believe our experiments provide the best evidence to date that animals use medication,” says Jaap de Roode, the evolutionary biologist who headed the research. Such studies may reveal chemicals useful for the treatment of human diseases, says Mark Hunter, a chemical ecologist at the University of Michigan who participated in the research.

Surveys of sea turtle nesting beaches conducted last year in Florida by state Fish and Wildlife Conservation Commission biologists add up to good news for leatherback and green turtles, both of which continued positive long-term trends in the number of nests on Sunshine State beaches. Researchers turned up 8,870 green sea turtle nests, a tenfold increase since counts began in 1989; leatherback nests tallied at 552, up from 45 in 1989. The surveys account for about 34 percent of Florida’s known leatherback nests and 74 percent of statewide green nests. “They’re doing great,” says Anne Meylan, a biologist with the conservation commission. Good news may be on the way for loggerheads, too. After reaching a peak of 59,918 nests in the 1998 survey, loggerhead nesting declined 25 percent during the past 12 years. Last year, however, researchers turned up nearly 48,000 nests, which is above the 10-year average. “This is a welcome piece of data and may be the beginning of a positive change in the trend, but more good nesting years like 2010 will be needed to confirm that,” Meylan says.

All in One Gulp

A blue whale’s single mouthful of krill (tiny crustaceans) can add up to 450,000 calories (enough to feed about 230 men of average size for a day), according to a new report in the Journal of Experimental Biology. That’s roughly 240 times the energy that the whale burns—about 1,900 calories—in getting the food. This calculation suggests that these massive baleen whales—the largest animals on Earth—are the most efficient feeders of all creatures.