Birders in North America and Europe put out some 550,000 tons of wild birdseed a year, yet scientists are only beginning to study the hobby’s biological effects 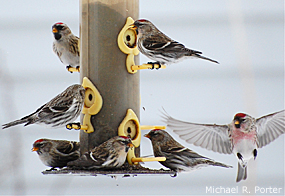 
But as scientists begin to study the effects of bird feeding, they are discovering some major impacts, ranging from the spread of diseases to the possible evolution of new species. As Gillian Robb of Queen’s University in Belfast writes in Frontiers in Ecology and Environment, “feeding birds can affect every aspect of bird ecology, from daily survival to large-scale migration … but we still have only a basic understanding of how it affects bird populations.”

In Europe and North America, bird feeding has seen a meteoric rise in popularity since the 1950s. The hobby has become so pervasive that David Bonter, director of Project FeederWatch at the Cornell Lab of Ornithology, notes, “the biggest challenge for scientists studying the impacts of bird feeders is finding a control population that does not have access to feeders.” Even if this problem could be solved, he adds, “it would be extremely difficult to separate the effects of supplemental feeding from changes in habitat caused by humans or from the effects of global warming.”

Despite such challenges, scientists already are making some remarkable discoveries. Biologist Martin Schaefer at Germany’s University of Freiburg, for example, has been studying a unique population of blackcaps that migrates northwest to the United Kingdom each fall rather than south to ancestral wintering grounds in Spain and North Africa. Prior to the 1950s, these adventurous blackcaps would have starved. With the explosion of bird feeding, however, the birds not only are thriving in winter, they reach summer breeding grounds in Germany sooner than blackcaps that make the longer trip.

Already, in less than 30 generations, these two groups of blackcaps—which tend to mate with birds of their own kind—are showing genetic and physical differences. The U.K. birds, for instance, have begun to evolve rounder wings and longer, narrower bills. In this case, bird feeding could contribute to the evolution of a new species in a remarkably short period of time. So far, no studies like Schaefer’s have been conducted in North America. Yet Bonter points out that “common feeder birds in North America are doing well, and bird feeding could certainly be playing a part”—by contributing to larger clutches or higher hatchling survival, for example. Among the 65 to 70 species that Project FeederWatch monitors, most populations are stable or increasing.

Yet scientists warn that feeding birds can have negative impacts, including outbreaks of mycoplasmal conjunctivitis, a disease that has wiped out 60 percent of house finches in the eastern United States. (But bird feeding also contributed to the eastward spread of this species, which is native to the West.) And bird feeders may serve as ecological traps by tempting birds to nest too early or providing false clues that a habitat has abundant food.

Surprisingly, one of the most common assumptions—that feeders harm birds by attracting predators—may be wrong. According to Bonter, studies show that “birds with access to a reliable supply of food carry less fat, so they end up being more agile and less susceptible to predation.” Such studies underscore how little we still know. As Bonter points out, “we have embarked on a huge experiment by putting out billions of dollars of birdseed with hardly any research into its ecological and behavioral effects.”

David Lukas is a California-based writer.

“For the Birds: Which Seeds Are Best?” by David Lukas
Create a Bird-Friendly Habitat
Garden for Wildlife: NWF’s Certified Wildlife Habitat Program®