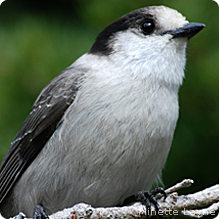 In Ontario’s Algonquin Provincial Park, February is a lean time for songbirds. Most birds that have not migrated south are simply hunkered down until spring. Yet for gray jays, February is the start of the breeding season. This month, on well-hidden nests, females will be sitting on their clutches—three or four pale green, speckled eggs—while snow piles up all around.
Their secret? Hoarding food. Over summer and fall, jays collect food—lots of food, as much as 50 pounds per robin-sized bird. “They cache insects, berries, mushrooms and bits of flesh that they pick from carcasses,” says Dan Strickland, the park’s former chief naturalist. This strategy has worked well for eons.

But a decades-long study coauthored by Strickland has found that gray jays are now suffering population declines and a shrinking range as global warming heats up the natural “refrigerator” that once kept their perishable food fresh. Annual air temperature in the park has been increasing by about 0.7 degrees F. per decade. Over the past 25 years, the birds’ population has dropped by half. And habitat that once supported breeding jays is now abandoned.

Stanford University biologist Terry Root, author of several publications on how climate change affects birds, says the gray jay study stands out as one of the first examples of a range contraction—rather than expansion—due to global warming. “Many studies have shown that with rapid warming, bird species show distributional changes,” says Root, “but the changes we’ve seen have been almost exclusively expansions on the poleward side of species’ ranges.”

Iconic northern bird: The gray jay is as much an icon of the dark spruce-fir forests as the moose and the wolf. People love the tame and cheeky birds, which hop into campsites to beg for handouts. According to legend, their nickname, “whiskey jack,” comes from the Algonquin Indian name for a mischievous forest spirit.

Find out how to create an NWF Certified Wildlife Habitat in your yard.
Learn more about how global warming affects wildlife.