It Came Out of the Dark

A frightening fungus has killed more than a million bats in North America; is there anything we can do to help the besieged flying mammals? 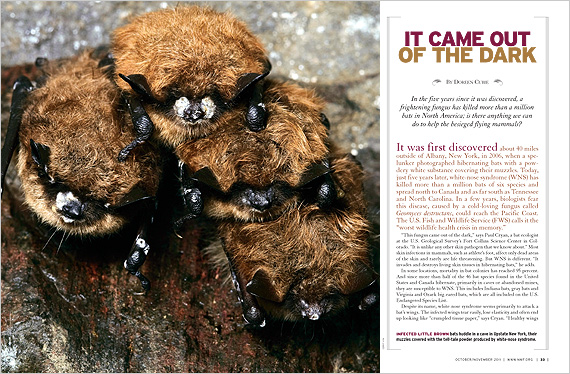 IT WAS FIRST DISCOVERED about 40 miles outside of Albany, New York, in 2006, when a spelunker photographed hibernating bats with a powdery white substance covering their muzzles. Today, just five years later, white-nose syndrome (WNS) has killed more than a million bats of six species and spread north to Canada and as far south as Tennessee and North Carolina. In a few years, biologists fear this disease, caused by a cold-loving fungus called Geomyces destructans, could reach the Pacific Coast. The U.S. Fish and Wildlife Service (FWS) calls it the “worst wildlife health crisis in memory.

“This fungus came out of the dark,” says Paul Cryan, a bat ecologist at the U.S. Geological Survey’s Fort Collins Science Center in Colorado. “It is unlike any other skin pathogen that we know about.” Most skin infections in mammals, such as athlete’s foot, affect only dead areas of the skin and rarely are life threatening. But WNS is different. “It invades and destroys living skin tissues in hibernating bats,” he adds.

In some locations, mortality in bat colonies has reached 95 percent. And since more than half of the 46 bat species found in the United States and Canada hibernate, primarily in caves or abandoned mines, they are susceptible to WNS. This includes Indiana bats, gray bats and Virginia and Ozark big-eared bats, which are all included on the U.S. Endangered Species List.

Despite its name, white-nose syndrome seems primarily to attack a bat’s wings. The infected wings tear easily, lose elasticity and often end up looking like “crumpled tissue paper,” says Cryan. “Healthy wings are very important to bats,” he explains, not just for flying but also during hibernation. Bats are especially susceptible to dehydration throughout the long winter, and their wings help them maintain proper water balance. When WNS penetrates a wing, Cryan notes, the fungus is “basically poking holes in the bucket,” causing water to leak out. He and his colleagues believe extreme thirst eventually rouses the bats from their winter torpor, and they leave their cave to find water. This depletes the fat stores the animals depend on to get through the cold months. Most of them perish before spring.

“It’s almost impossible to overestimate the consequences of white-nose syndrome to these animals and to the environment,” says Nina Fascione, executive director of Bat Conservation International (BCI) Bats are primary predators of night-flying insects and are known to eat mosquitoes. They also eat many agricultural pests, particularly those that attack corn and cotton crops. But despite the benefits they provide for people, “bats have had a hard time of it over the years,” adds Fascione. “They’ve been victims of myth and superstition, and have long been killed by misinformed people. Sometimes, bats have even been dynamited in caves. Today they are threatened by loss of habitat, wind turbines and climate change. White-nose syndrome is one more horrible thing.”

There is little the general public can do for bats afflicted with WNS—except to stay out of places where the animals are hibernating and to report sick individuals to state wildlife authorities. But people can help the beleaguered creatures in other ways, such as providing them with appropriate shelters called bat houses. Many species will roost in boxes during the day, and they also will raise their young in them.  “Bats need bat houses more than ever today,” says Laura Seckbach Finn, a biologist and director of the nonprofit group Fly By Night, Inc. Finn, who lives in central Florida, has four bat houses on her property, with about 1,000 free-tailed, evening and big brown bats in residence. 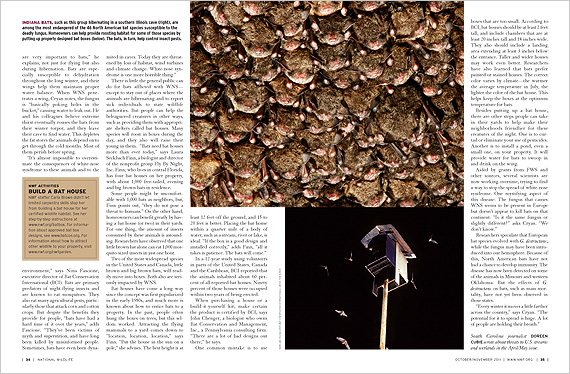 Some people might be uncomfortable with 1,000 bats as neighbors, but, Finn points out, “they do not pose a threat to humans.” On the other hand, homeowners can benefit greatly by having a bat house (or two) in their yards. For one thing, the amount of insects consumed by these animals is astounding. Researchers have observed that one little brown bat alone can eat 1,000 mosquito-sized insects in just one hour.

Two of the most widespread species in the United States and Canada, little brown and big brown bats, will readily move into boxes. Both also are seriously impacted by WNS.

Bat houses have come a long way since the concept was first popularized in the early 1980s, and much more is known about how to entice bats to a property. In the past, people often hung the boxes on trees, but this seldom worked. Attracting the flying mammals to a yard comes down to “location, location, location,” says Finn. “Put the house in the sun on a pole,” she advises. The best height is at least 12 feet off the ground, and 15 to 20 feet is better. Placing the bat house within a quarter mile of a body of water, such as a stream, river or lake, is ideal. “If the box is a good design and installed correctly,” adds Finn, “all it takes is patience. The bats will come.”

In a 12-year study using volunteers in parts of the United States, Canada and the Caribbean, BCI reported that the animals inhabited about 60 percent of all reported bat houses. Ninety percent of those houses were occupied within two years of being erected.

When purchasing a house or a build-it-yourself kit, make certain the product is certified by BCI, says John Chenger, a biologist who owns Bat Conservation and Management, Inc., a Pennsylvania consulting firm. “There are a lot of bad designs out there,” he says.

One common mistake is to use boxes that are too small. According to BCI, bat houses should be at least 2 feet tall, and include chambers that are at least 20 inches tall and 14 inches wide. They also should include a landing area extending at least 3 inches below the entrance. Taller and wider houses may work even better. Researchers have also learned that bats prefer painted or stained houses. The correct color varies by climate—the warmer the average temperature in July, the lighter the color of the bat house. This helps keep the boxes at the optimum temperature for bats.

Besides putting up a bat house, there are other steps people can take in their yards to help make their neighborhoods friendlier for these creatures of the night. One is to curtail or eliminate your use of pesticides. Another is to install a pond, even a small one, on your property. It will provide water for bats to swoop in and drink on the wing.

Aided by grants from FWS and other sources, several scientists are now working overtime, trying to find a way to stop the spread of white-nose syndrome. One mystifying aspect of this disease: The fungus that causes WNS seems to be present in Europe but doesn’t appear to kill bats on that continent. “Is it the same fungus or slightly different?” asks Cryan. “We don’t know.”

Researchers speculate that European bat species evolved with G. destructans, while the fungus may have been introduced into our hemisphere. Because of this, North American bats have not had a chance to develop immunity. The disease has now been detected on some of the animals in Missouri and western Oklahoma. But the effects of G. destructans on bats, such as mass mortality, have not yet been observed in those states.

“Every winter it moves a little farther across the country,” says Cryan. “The potential for it to spread is huge. A lot of people are holding their breath.”