The channel has been closed to navigation, but wetlands destroyed by the Mississippi River Gulf Outlet must still be restored 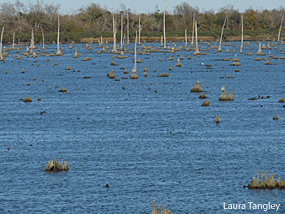 Standing on a levee overlooking New Orleans’ Bayou Bienvenue, you can see skeletons of dead trees scattered across the open water, a hint at what was once there: a thriving cypress-tupelo swamp that helped protect the city’s Lower Ninth Ward from damaging hurricanes.

But all that changed starting in the late 1950s, when the U.S. Army Corps of Engineers began construction of the Mississippi River Gulf Outlet (MRGO), a 76-mile-long channel intended to provide a navigation shortcut from central New Orleans to the Gulf of Mexico. Completed in 1968, the project destroyed 27,000 acres of local wetlands, including Bayou Bienvenue’s cypress swamp. Adding in erosion and salinity changes caused by the channel in subsequent years, the MRGO (known locally as “Mister Go”) negatively impacted a total of 600,000 acres of wetlands in the Greater New Orleans area.

Now an ambitious plan crafted by the MRGO Must Go Coalition seeks to bring back these critical wetlands. Launched in 2006 in the wake of the destruction wrought by Hurricane Katrina, the 17-member coalition—coordinated by NWF—brought together scientists, environmentalists and local communities to raise awareness of the role the MRGO played in worsening Katrina’s damage. Although parts of the Lower Ninth Ward and neighboring St. Bernard Parish are at higher elevations than much of the city, they experienced the most catastrophic flooding due to increased storm surge and levee breaches directly attributable to the channel. Today, six years after Katrina, these communities still are home to just a fraction of the number of residents they once had.

In 2007, the U.S. Congress agreed with the coalition and called on the Corps to permanently close the MRGO to navigation and develop a plan for restoring the ecosystems it destroyed. The deadline for both actions was May 2008. Although the channel now has been closed, “the Corps is two and a half years late coming out with the restoration plan,” says NWF Senior Coastal Louisiana Organizer and coalition coordinator Amanda Moore.

Still, Moore notes signs of progress. Last month, the three-month comment period on a draft of the restoration plan ended, and the Corps is reviewing input. Partnering with leading scientists and local landowners, the coalition submitted a set of detailed recommendations to modify the plan. Some 27,000 citizens from across the country sent in public comments supporting these recommendations.

“The Corps’ draft plan marks a long-awaited step toward protecting communities along the MRGO and moving forward on crucial restoration projects,” says John Lopez, acting director of the Lake Pontchartrain Basin Foundation, a coalition member. “Now we look to the Corps to consider and incorporate our recommendations, which strengthen the draft plan considerably by offering suggestions that will achieve better protection for our communities and a sustainable, healthy ecosystem.”

For details on the coalition’s recommendations, along with important updates as the plan moves forward, visit www.MRGOmustGO.org.

To learn more about the crisis of coastal land loss on the Gulf Coast, and what NWF and other conservation groups are doing to help, see: Gulf Coast Revival? in the April/May 2011 issue of National Wildlife.