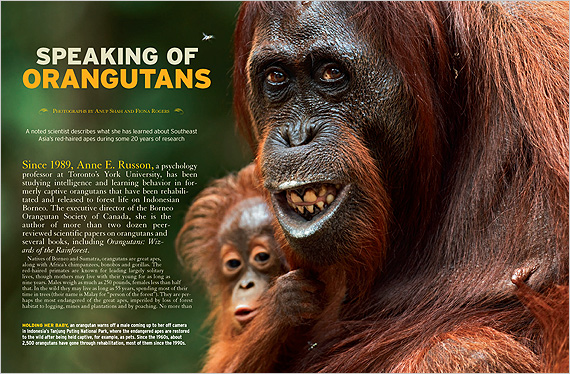 SINCE 1989, ANNE E. RUSSON, a psychology professor at Toronto's York University, has been studying intelligence and learning behavior in formerly captive orangutans that have been rehabilitated and released to forest life on Indonesian Borneo. The executive director of the Borneo Orangutan Society of Canada, she is the author of more than two dozen peer-reviewed scientific papers on orangutans and several books, including Orangutans: Wizards of the Rainforest. Natives of Borneo and Sumatra, orangutans are great apes, along with Africa's chimpanzees, bonobos and gorillas. The red-haired primates are known for leading largely solitary lives, though mothers may live with their young for as long as nine years. Males weigh as much as 250 pounds, females less than half that. In the wild they may live as long as 55 years, spending most of their  time in trees (their name is Malay for "person of the forest"). They are perhaps the most endangered of the great apes, imperiled by loss of forest habitat to logging, mines and plantations and by poaching. No more than an estimated 55,000 orangutans remain on Borneo, and no more than 6,500 on Sumatra. 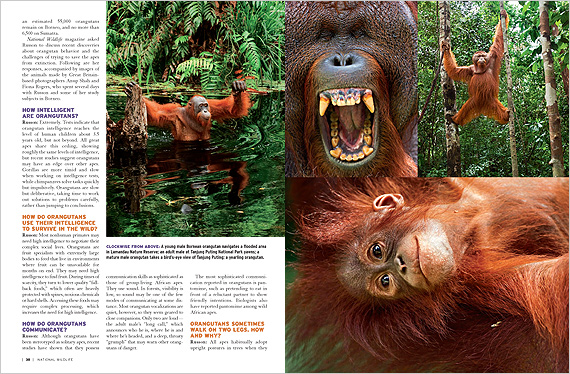 National Wildlife magazine asked Russon to discuss recent discoveries about orangutan behavior and the challenges of trying to save the apes from extinction. Following are her responses, accompanied by images of the animals made by Great Britain-based photographers Anup Shah and Fiona Rogers, who spent several days with Russon and some of her study subjects in Borneo.

How intelligent are orangutans?
Russon: Extremely. Tests indicate that orangutan intelligence reaches the level of human children about 3.5 years old, but not beyond. All great apes share this ceiling, showing roughly the same levels of intelligence, but recent studies suggest orangutans may have an edge over other apes. Gorillas are more timid and slow when working on intelligence tests, while chimpanzees solve tasks quickly but impulsively. Orangutans are slow but deliberative, taking time to work out solutions to problems carefully, rather than jumping to conclusions.

How do orangutans communicate?
Russon: Although orangutans have been stereotyped as solitary apes, recent studies have shown that they possess communication skills as sophisticated as those of group-living African apes. They use sound. In forests, visibility is low, so sound may be one of the few modes of communicating at some distance. Most orangutan vocalizations are quiet, however, so they seem geared to close companions. Only two are loud—the adult males "long call," which announces who he is, where he is and where he's headed, and a deep, throaty "grumph" that may warn other orangutans of danger.

The most sophisticated communication reported in orangutans is pantomime, such as pretending to eat in front of a reluctant partner to show friendly intentions. Biologists also have reported pantomime among wild African apes. 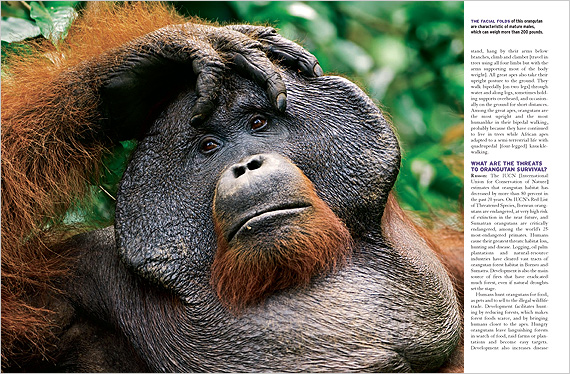 Orangutans sometimes walk on two legs. How and Why?
Russon: All apes habitually adopt upright postures in trees when they stand, hang by their arms below branches, climb and clamber [travel in trees using all four limbs but with the arms supporting most of the body weight]. All great apes also take their upright posture to the ground. They walk bipedally [on two legs] through water and along logs, sometimes holding supports overheard, and occasionally on the ground for short distances. Among the great apes, orangutans are the most upright and the most humanlike in their bipedal walking, probably because they have continued to live in trees while African apes adapted to a semi-terrestrial life with quadrupedal [four-legged] knuckle-walking.

What are the threats to orangutan survival?
Russon: The IUCN [International Union for Conservation of Nature] estimates that orangutan habitat has decreased by more than 80 percent in the past 20 years. On IUCN's Red List of Threatened Species, Bornean orangutans are endangered, at very high risk of extinction in the near future, and Sumatran orangutans are critically endangered, among the world's 25 most-endangered primates. Humans cause their greatest threats: habitat loss, hunting and disease. Logging, oil palm plantations and natural-resource industries have cleared vast tracts of orangutan forest habitat in Borneo and Sumatra. Development is also the main source of fires that have eradicated much forest, even if natural droughts set the stage. 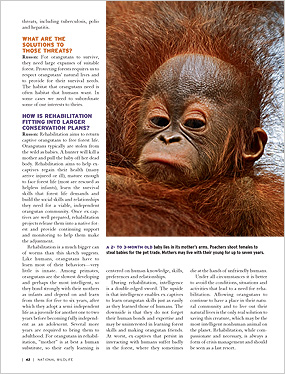 What are the solutions to those threats?
Russon: For orangutans to survive, they need large expanses of suitable forest. Protecting forests requires us to respect orangutans' natural lives and to provide for their survival needs. The habitat that orangutans need is often habitat that humans want. In some cases we need to subordinate some of our interests to theirs.

How is rehabilitation fitting into larger conservation plans?
Russon: Rehabilitation aims to return captive orangutans to free forest life. Orangutans typically are stolen from the wild as babies. A hunter will kill a mother and pull the baby off her dead body. Rehabilitation aims to help ex-captives regain their health (many arrive injured or ill), mature enough to face forest life (most are rescued as helpless infants), learn the survival skills that forest life demands and build the social skills and relationships they need for a viable, independent orangutan community. Once ex-captives are well prepared, rehabilitation projects release them into a native forest and provide continuing support and monitoring to help them make the adjustment.

Rehabilitation is a much bigger can of worms than this sketch suggests. Like humans, orangutans have to learn most of their behaviors—very little is innate. Among primates, orangutans are the slowest developing and perhaps the most intelligent, so they bond strongly with their mothers as infants and depend on and learn from them for five to six years, after which they adopt a semi-independent life as a juvenile for another one to two years before becoming fully independent as an adolescent. Several more years are required to bring them to adulthood. For orangutans in rehabilitation, "mother" is at best a human substitute, so their early learning is centered on human knowledge, skills, preferences and relationships.

During rehabilitation, intelligence is a double-edged sword. The upside is that intelligence enables ex-captives to learn orangutan skills just as easily as they learned those of humans. The downside is that they do not forget their human bonds and expertise and may be uninterested in learning forest skills and making orangutan friends. At worst, ex-captives that persist in interacting with humans suffer badly in the forest, where they sometimes die at the hands of unfriendly humans.

Under all circumstances it is better to avoid the conditions, situations and activities that lead to a need for rehabilitation. Allowing orangutans to continue to have a place in their natural community and to live out their natural lives is the only real solution to saving this creature, which may be the most intelligent nonhuman animal on the planet. Rehabilitation, while compassionate and necessary, is always a form of crisis management and should be seen as a last resort.