Book Review—Polar Bears: The Natural History of a Threatened Species

No charismatic species is more obviously and eminently threatened by global warming than is the polar bear. And no scientist in the world has earned more credibility for describing both the natural history of this species and the threats it faces than is Ian Stirling, a Canadian Wildlife Service scientist who has studied polar bears for more than 30 years. His new book, Polar Bears: The Natural History of a Threatened Species, is a landmark in the literature on this animal.

Threats to the Polar Bear

Stirling and his co-authors of the classic 1999 paper in the journal Arctic brought the plight of the polar bear, threatened by global warming, to the attention of the world, describing the ever-earlier trend for breakup of winter ice in Canada’s Hudson Bay. This earlier breakup reduces the amount of time polar bears can hunt for their essential prey, seals, since this ice is the platform from which they must hunt. The 1993 paper described declines in polar bear weight and reproductive performance associated with the shrinking availability of ice in spring, the most important hunting period, as this is the time seals are giving birth to pups. The conclusions of this paper have been validated and extended worldwide by subsequent studies that contributed, in 2008, in the polar bear being listed as a threatened species under the U.S. Endangered Species Act.

I first met Ian Stirling in New Zealand in 1965 when I was working for his friend and colleague, Graeme Caughley. Both Stirling and Caughley ultimately became world famous in their respective fields, and Stirling is now frequently referred to as the “Godfather” of polar bear research. I spent most of my career working on grizzly and black bears in Alaska, so I was able to stay in touch with Stirling throughout his career. Just last fall, I was privileged to visit Hudson Bay with him, observe the plight of polar bears there first hand and see highly disturbing films of starving cubs and their mothers.

Revealing the World of the Polar Bear

Stirling’s book is not a polemic about global warming, although the chapter on this topic is the best description I’ve read on the problems facing this species in a warming world. As the title indicates, this book is a beautifully illustrated description of one of the most fascinating and unique mammals in the world. Stirling describes how and why the polar bear evolved, some 150,000 years ago, from its ancestral species the brown (grizzly) bear.  He describes and shows pictures of how polar bears capture their prey and interact with each other and with the low densities of people in their frigid environment. 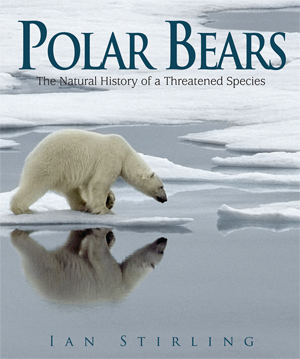 As a biologist, one of the chapters most interesting to me described how scientists study this species, which is part marine mammal and part terrestrial bear. Since Stirling is first and foremost a scientist, albeit one with an exceptional ability to write in a style accessible to everyone, not all the photographs in this book suggest polar bears are either the cute or cuddly, as is commonly emphasized in many other volumes about wildlife. In this book the polar bear is revealed as an exquisitely adapted predator of seals and other marine mammals. Although some readers may be taken aback by a few of the bloody pictures in this book, these images show the reality of polar bear life, and Stirling has done natural history a commendable service in not trying to glamorize polar bears by depicting them as little more than people with furry white coats. Polar bears merit being accepted on their own terms—not ours.
Most of the book’s photos, however, are spectacular shots of a beautiful species in one of the world’s most beautiful and pristine ecosystems—a high-arctic environment that most people will never see. Stirling is an accomplished photographer in his own right, but his book includes photos taken by other polar bear experts and professional photographers. The book is a delight both to view and to read and is a valuable addition to his other two popular books about polar bears and other bear species. Polar Bears: The Natural History of a Threatened Species is a most welcome addition to those on my bookshelf. Because of the similarity in our names, I’ve long benefited from being confused with Ian as a polar bear expert, and this book will further enhance “my” reputation.