Using an innovative approach, NWF is working with western ranchers to convert their grazing allotments into secure habitats for several species 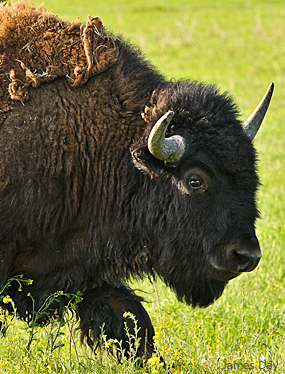 FOR 28 YEARS, Rick Jarrett ran cattle on 8,000 acres in Montana’s Gallatin National Forest, just outside Yellowstone National Park. “It is beautiful land,” says the burly fifth-generation rancher—a rugged paradise of rich grass, sagebrush and forest, cut by the sparkling Taylor Fork of the Gallatin River. Cattle did well there. Jarrett didn’t actually own the land, instead holding a grazing permit from the U.S. Forest Service. But he took good care of it, earning a government commendation for his stewardship.

Unfortunately for Jarrett, cows weren’t the only animals that thrived in the Taylor Fork region. Bison (left) wandered in from Yellowstone and grizzlies roamed the area, making short work of any cattle that died. And seven years ago, a dozen wolves moved in. “It was never the same after that,” Jarrett says. “The wolves would corner the cows and harass them.”

By 2008, Jarrett decided that the increasing conflicts with wildlife—plus higher diesel fuel prices that raised the cost of trucking cattle—were too much to deal with. He stopped taking cattle to Taylor Fork. But he also didn’t want to lose the value of his grazing rights. That’s when he heard of an innovative NWF program aimed at benefiting both ranchers and wildlife. The idea: Pay ranchers to give up grazing allotments, then get the Forest Service to permanently retire the permits. After more than a year of working with NWF Special Projects Coordinator Hank Fischer, who directs the program, Jarrett took home a check for $50,000. The bison, grizzlies and wolves got the land. “I was looking for solutions, not playing politics, and so was Hank,” says Jarrett. “I guess that’s why it worked so well.”

With the retirement of Jarrett’s allotment, the NWF plan has now taken cattle and sheep off more than 600,000 acres of prime wildlife habitat in Montana, Wyoming and Idaho. That’s an area about twice as large as Grand Teton National Park. The program is a prime example of how NWF’s habitat protection efforts have evolved with the times. It’s also a rare success story in a region where grazing rights traditionally have been viewed as an almost-sacred entitlement by ranchers, and where conservation groups and the livestock industry are usually at loggerheads. The NWF program “shows that environmental organizations can do something instead of just complaining and arguing,” says Chris Servheen, grizzly bear recovery coordinator for the U.S. Fish & Wildlife Service (FWS). “It’s a win-win for the ranchers and for the grizzlies and other wildlife.”

The program has even won cautious acceptance from livestock groups. Ranchers worry that any encroachment on their grazing rights represents a threat to their industry and to the benefits it provides, such as protecting the open range from being turned into condos. But in areas where grizzlies and wolves cause headaches for ranchers, it’s better to compensate them for giving up allotments than to wrest those rights away with litigation, observes Errol Rice, executive vice president of the Montana Stockgrowers Association. “If a rancher feels it is in his best interests to participate, we support that decision,” he says.

In fact, the biggest surprise of the NWF effort has been the lack of controversy it has generated. The program’s success is a testament to the quiet persistence of Fischer and his colleague, NWF Northern Rockies Regional Director Tom France, and to their ability to address the concerns of people on both sides. “Hank and Tom are the perfect brokers,” says Jim Murtaugh, program director at the Liz Claiborne-Art Ortenberg Foundation, which helps fund the program. It helped that, even before the grazing retirement plan started, Fischer had won the trust of conservationists, biologists and ranchers while running a Defenders of Wildlife program that compensates ranchers when wolves or grizzlies prey on their livestock. 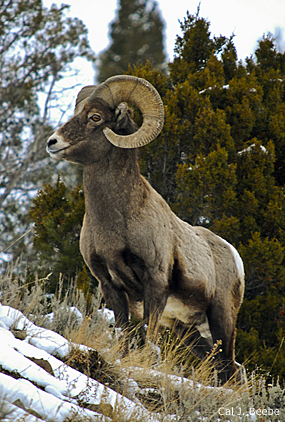 The NWF program sprang out of a similar effort started by bighorn sheep hunters in the mid-1980s. Concerned that the numbers of bighorns had plummeted from 2 million to 15,000, mainly because of diseases transmitted by domestic sheep, the Foundation for North American Wild Sheep began to buy up and retire sheep grazing permits in bighorn habitat. “They were the pioneers,” says France.

A decade ago, France and Fischer noticed that one of the allotments west of the Tetons the sheep foundation was trying to retire also was an area where ranchers were screaming about grizzlies killing their sheep. That’s a huge problem, because “once grizzly bears find sheep, they like them and it’s hard to keep them out,” says Jerry Reese, former supervisor of the Caribou-Targhee National Forest.

Removing the domestic sheep not only would protect wild bighorns, it also would eliminate grizzly predation on livestock. “That’s when the light bulb went off for me,” says Fischer, who had joined the Federation staff. NWF partnered with the wild sheep foundation to retire that allotment. “Before that,” he adds, “the favored method was to pressure federal agencies to simply take permits from ranchers. But that’s like ripping $20,000 or $30,000 out of someone’s pocket, and frankly it’s why we had so little success changing grazing patterns on federal lands.”

Offering financial compensation broke the logjam. Fischer and France discovered that ranchers were receptive, and that funders such as the Turner and Claiborne-Ortenberg foundations and Kendeda Fund would pick up the tab, typically about $2-3 per acre, along with donations from NWF members. The biggest initial hurdle, ironically, was NWF. “It took a fair amount of convincing the NWF leadership at the time,” France recalls. The leaders were concerned that Forest Service forest authorities might not honor promises to permanently retire grazing allotments.

Some national forest supervisors were skeptical as well. They worried about being the target of protests by the livestock industry. But as Fischer and France quietly proved that the program was both viable and noncontroversial, the skeptics’ doubts faded. The Forest Service learned, for instance, that taking sheep and cattle off lands where livestock was affected by wolves and grizzlies actually defused controversies. And in the process, the government saved money, since FWS no longer had to kill or remove grizzlies or wolves preying on cattle and sheep.

Each grazing allotment retirement typically takes several years to pull off, with Fischer spending about half his time sowing the seeds with ranchers and the other half raising funds. In recent years, he and France have closed more than 30 former grazing allotments around Yellowstone, freeing up habitat for wildlife everywhere from the Bridger-Teton National Forest in northwest Wyoming to the Caribou-Targhee National Forest in eastern Idaho. They even negotiated an innovative deal on private land, creating a corridor for bison along the Yellowstone River by eliminating grazing on 6,000 acres owned by the Church Universal and Triumphant in Montana. And they’ve extended the idea to national wildlife refuge land, retiring 45,000 acres on the Charles M. Russell National Wildlife Refuge in northeastern Montana. Says Fischer: “There’s still work to be done, but I feel awfully good about what we’ve managed to accomplish.”

NWF’s grazing allotment retirement program utilizes a market-based approach to conservation. “These retirements succeed because they work for all parties involved,” says the Federation’s Special Projects Coordinator Hank Fischer. Learn more about the Adopt a Wildlife Acre program, including how you can help.