The famed predator remains one of the ocean’s great mysteries, but scientists are starting to shed light on the shark’s deepest secrets 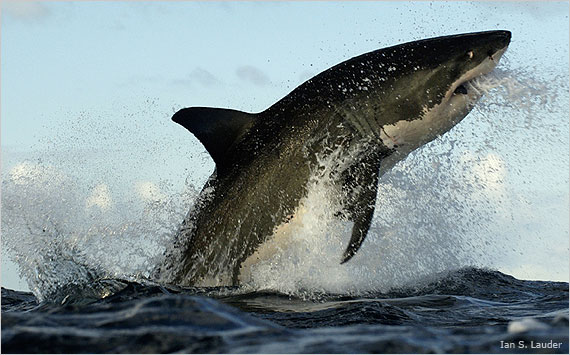 SCIENTISTS HAVE KNOWN since the 1970s that great white sharks congregate at seal rookeries around the Farallon Islands, Año Nuevo Island and various points off Central California from August to February. Where the massive sharks went during the rest of the year remained a mystery, however, until 2002, when scientists at Stanford University and several other research institutions announced that great whites they had tagged off California turned up as far away as the Hawaiian Islands, 2,300 miles distant.

Now, nearly 10 years after that announcement, scientists have tagged 179 of these top ocean predators off California and followed their movements, producing a much better picture of white shark migrations and habitat use in the North Pacific. “Once scientists learned that white sharks wandered out into the open Pacific Ocean, the challenge became understanding this behavior. Our work is showing that they have a very persistent, well-defined migratory pattern,” says Salvador Jorgensen of Stanford’s Hopkins Marine Station, the lead author on a recent report in the Proceedings of the Royal Society-Biological Sciences detailing shark movement.

In addition, Stanford DNA studies indicate that the population off California came from Australia and New Zealand some 150,000 to 200,000 years ago but that those populations may no longer interbreed. This isolation puts California’s white shark population—which recent estimates calculate at fewer than 1,000 animals—in a perilous position. “Individual sharks are not migrating throughout the world, which means that local populations that decline and disappear won’t be replaced quickly,” says Carol Reeb, a Stanford research associate.

Living primarily off Africa, Australia and New Zealand and in the Northeastern Pacific, white sharks can migrate vast distances. Biologists tracked one animal from South Africa to Australia and back, a distance of 12,400 miles. Great whites are protected under the Convention on International Trade in Endangered Species, but commercial fishers still slaughter them in great numbers, principally for their fins, an Asian delicacy, and for their jaws, which are popular souvenirs.

Adult great whites can measure more than 20 feet long and weigh up to 4,000 pounds. Cruising around Central California’s offshore islands from August through February, they feed mainly on sea lions, harbor seals and elephant seals. About 40 different white sharks may visit the Farallon Islands, an important seal rookery, during this time, but only about 12 to 20 stay through the whole fall, since competition is rigorous. “We only get the big guys on the Farallones,” says Scot Anderson, a biologist with Point Reyes National Seashore who has identified great whites off California by photographing unique marks on the trailing edges of their fins.

Beginning in December, the California sharks start to disappear. Satellite tags that record location and diving patterns reveal that about 20 percent of the animals swim to the Hawaiian Islands, perhaps to feed on humpback whale calves or placentas. The majority of these predators, however, migrate to a mid-ocean area between Hawaii and the West Coast known among marine biologists as the White Shark Café.

At the café, tagged sharks reveal an astounding pattern of constant diving—30 to 96 times a day to depths up to 1,800 feet—that doesn’t seem to correlate with known fish concentrations. Satellite evidence indicates that the café is not a productive feeding ground. Tuna and billfish range there, but, says Jorgensen, “It’s hard to imagine a white shark chasing anything down like a fast moving tuna.”

Michael Domeier of the Marine Conservation Science Institute in Fallbrook, California, studies white sharks around Guadalupe Island off Baja California and at the café. He thinks the predators may be feeding not on fish but on giant squid. As evidence he cites the appearance of sperm whales—famous giant-squid eaters—in that area.

Jorgensen and others lean toward mating as the principal activity, making the White Shark Café more of a White Shark Honeymoon Lodge. Though no one has seen white sharks mate or give birth, pups show up as bycatch in Southern California fisheries each year, peaking in August. Scientists think the species takes 12 to 18 months to gestate; if so, mating must occur in spring or early summer. “And that’s when most female and 100 percent of tagged males are at the café,” Jorgensen says.

Taylor Chapple, with the Max Planck Institute in Germany and an author on the recent Proceedings paper, says that males arrive at the café before females and spend their time diving until the females arrive. Then the scientists see a big increase in the sharks’ rate of descending and ascending. “I think that the café has a serious potential as a breeding area,” Chapple says.

Determining if this is the case is an important issue. White sharks are top predators, and their disappearance in the Northeast Pacific could have catastrophic consequences for the local food web. Understanding their habits also may help save the animals.

According to Barbara Block, a professor of Marine Sciences at Stanford whose lab has spearheaded much of the white shark work, scientists need to continue monitoring the health of the white shark population. “We’re only beginning to understand what it means to have the equivalent of a tiger or lion in the ocean wilderness off California,” she says.

Shark on the Edge

The International Union for the Conservation of Nature lists the white shark as vulnerable on its Red List of Threatened Species, the most comprehensive list of its kind. Vulnerable means the shark faces a high risk of extinction in the wild based on current data. Threats to the species include commercial and sport fisheries that target great whites and degradation of inshore habitats vital to young sharks.

Frequent contributor Michael Tennesen is based in California.