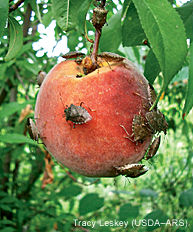 SOMETHING'S BUGGING DOUG INKLEY—26,056 somethings, to be precise. That’s the number of stink bugs the NWF senior scientist collected in his Maryland home in just the first five months of this year.

He’s found stink bugs under his mattress, clogging his bathroom drain, even floating in his homemade chili. He once counted 8,000 of the insects in his attic in a single day. “They are a huge nuisance,” he says with remarkable restraint.

Inkley’s unwanted guests are a disturbing example of an invasive species run rampant. The brown marmorated stink bug, as the offending species is known, was first reported in the United States in the late 1990s. Its name comes from the ability to emit a foul odor that deters predators. Native to Asia, the bugs most likely hitchhiked here via international cargo. Gardeners in Pennsylvania were among the first to notice the new bugs, which were not only feeding on ornamental plants and vegetables but also entering people’s homes in autumn to ride out the cold months.

Since those early sightings, the shield-shaped, roughly three-quarter-inch-long insects have established populations in 33 states and the District of Columbia, where they suck juices from more than 300 different kinds of plants, including peppers, soybeans, corn, grapes and raspberries. Peaches, pears and other tree fruit rate high on the stink bug menu. Apple growers in Pennsylvania, Virginia, Maryland and West Virginia lost $37 million to the insects in 2010.

Before brown marmorateds arrived, North America already had some 250 native species of stink bug. Some native stink bugs are serious plant pests, but they are kept in check by predators such as parasitic wasps. The brown marmorated stink bug has few enemies here, which is why its population has exploded.

U.S. scientists are studying quarantined specimens of Asian wasps that may prey only on brown marmorateds in their natural habitat. If studies show that these wasps will prey just on brown maromateds here and not cause other environmental problems, they could be released to help control the invading stink bugs.

With thousands of stink bugs in her own attic, entomologist Tracy Leskey of the U.S. Department of Agriculture’s Appalachian Fruit Research Station in West Virginia is trying to develop tools to manage brown marmorated stink bugs, using pheromones or other attractants to capture the bugs in agricultural settings. Leskey has heard from rooftop gardeners in Manhattan complaining about brown marmorateds eating their tomatoes. She’s most worried about organic farmers, who have fewer weapons for combating insect pests than do conventional growers and who have been especially hard hit by the bugs. “We had a number of organic growers that really just waved the white flag of surrender,” she says. “That’s just depressing.” Unfortunately, other farmers are spraying more than ever but still losing the war against this invasive pest.

The new stink bugs are among the latest in a long line of problematical animals and plants that are threatening native ecosystems, agriculture and even human health. To combat those species, NWF lobbyists are pushing for new government policies that would require stricter inspection of everything from imported nursery plants to shipping containers. “Once they get here, it’s too late,” Inkley says of invasive species. “We must keep potential invasive species from getting here in the first place.”