An Alaskan biologist braves grueling conditions to conduct a long-term study of the gyrfalcon, a rare Arctic raptor that is vulnerable to climate change 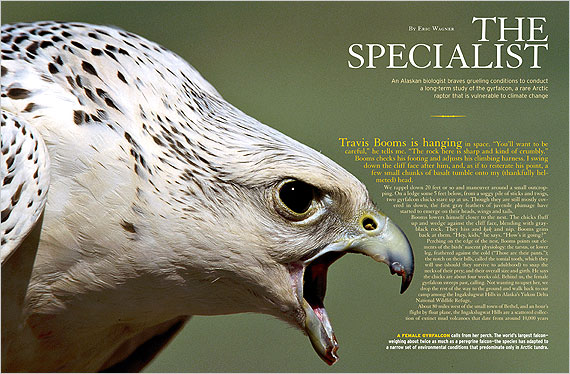 TRAVIS BOOMS is hanging in space. You'll want to be careful, he tells me. The rock here is sharp and kind of crumbly. Booms checks his footing and adjusts his climbing harness. I swing down the cliff face after him, and, as if to reiterate his point, a few small chunks of basalt tumble onto my (thankfully helmeted) head.

We rappel down 20 feet or so and maneuver around a small outcropping. On a ledge some 5 feet below, from a soggy pile of sticks and twigs, two gyrfalcon chicks stare up at us. Though they are still mostly covered in down, the first gray feathers of juvenile plumage have started to emerge on their heads, wings and tails.

Booms lowers himself closer to the nest. The chicks fluff up and wedge against the cliff face, blending with gray-black rock. They hiss and kak and nip. Booms grins back at them. Hey, kids, he says. Hows it going?

Perching on the edge of the nest, Booms points out elements of the birds nascent physiology: the tarsus, or lower leg, feathered against the cold (Those are their pants.); the notch on their bills, called the tomial tooth, which they will use (should they survive to adulthood) to snap the necks of their prey; and their overall size and girth. He says the chicks are about four weeks old. Behind us, the female gyrfalcon sweeps past, calling. Not wanting to upset her, we drop the rest of the way to the ground and walk back to our camp among the Ingakslugwat Hills in Alaska's Yukon Delta National Wildlife Refuge.

About 80 miles west of the small town of Bethel, and an hours flight by float plane, the Ingakslugwat Hills are a scattered collection of extinct mud volcanoes that date from around 10,000 years ago. There are 32 of these cones and calderas—the largest is just 625 feet tall—and all of them are in various states of decay as tundra reclaims them. But because the delta itself is so flat—75 percent of it rises less than 100 feet in elevation—they appear to tower over the landscape.

The relative height of the hills makes them the regions only suitable habitat for cliff-nesting raptors, so they are overflowing with golden eagles, rough-legged hawks and gyrfalcons. The nesting density of gyrfalcons in particular is among the highest known in the world, with eight or more pairs ranging over a scant 300 square miles—perhaps as many as 40 breeding, non-breeding and nestling birds total. Forty birds may not sound like a lot, but consider: Anywhere else, you might not find so many gyrfalcons in an area less than 3,000 square miles.

Booms, a biologist with the Alaska Department of Fish and Games Wildlife Diversity Program, has studied the gyrfalcons here since 2003. Aside from being a fascinating creature, the worlds largest falcon is an unusual—and unusually vulnerable—species, he says: an apex predator of the Arctic tundra that, like the polar bear, is so well adapted to a narrow set of environmental conditions that its future would be in doubt if those conditions changed rapidly. Unfortunately, adds Booms, there are signs that, as a consequence of global warming, conditions indeed are changing in many parts of the raptors range. 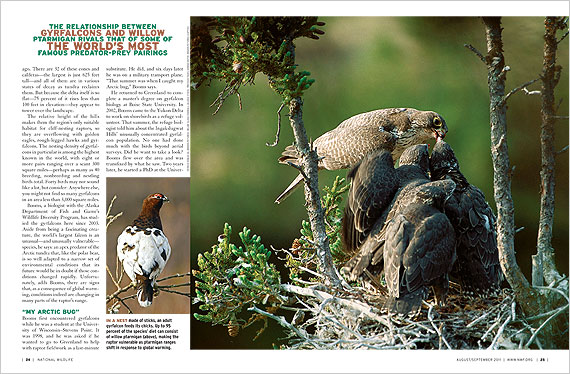 Booms first encountered gyrfalcons while he was a student at the University of Wisconsin-Stevens Point. It was 1998, and he was asked if he wanted to go to Greenland to help with raptor fieldwork as a last-minute substitute. He did, and six days later he was on a military transport plane. That summer was when I caught my Arctic bug, Booms says.

He returned to Greenland to complete a masters degree on gyrfalcon biology at Boise State University. In 2002, Booms came to the Yukon Delta to work on shorebirds as a refuge volunteer. That summer, the refuge biologist told him about the Ingakslugwat Hills unusually concentrated gyrfalcon population. No one had done much with the birds beyond aerial surveys. Did he want to take a look? Booms flew over the area and was transfixed by what he saw. Two years later, he started a PhD at the University of Alaska, focusing his research on the hills gyrfalcons. Booms has a field biologists leanness and reserve, which is good because the study of gyrfalcons is always grueling and more than often thankless. For his PhD, which he completed in 2010, he would spend three or four months at a time in the delta, alone for the most part. He visited nests, hiking prodigious distances across thick and enervating tundra, sometimes only to find that a particular cliff was not occupied by the birds. Then he would turn around and hike back to his tent. I'm really lucky to be able to work with gyrfalcons, but there's also a reason that not a lot of people study them, Booms says.
Due to the rigors of the research, which make the gyrfalcon perhaps the least-studied falcon, Booms was able to ask—and answer—some basic biological questions about the Alaskan population: whether adults migrate (no), whether they nest in the same place each year (sometimes) and what they eat (a type of grouse called the willow ptarmigan). Solving such mysteries took tremendous amounts of the graduate students time. Booms once reviewed 2,700 hours of video, for example, to learn precisely what gyrfalcon chicks eat.

Today, as a state biologist, Booms cannot devote as much time to a single species as he once did. And so, at perches near nest sites, he picks through tufts of grass looking for feathers, which he uses to identify individual birds. (A feather tip carries enough genetic material from the skin to give a DNA fingerprint.) By identifying individuals, Booms can tell which gyrfalcons have returned in a given year and where they are nesting. But finding feathers can be tricky, as the birds perches are littered with animal remains, including esophagi, feet, skulls and wings.

Booms tells me that almost all these bits and pieces are from willow ptarmigan. During winter, the ptarmingans plumage is entirely white, but by the late spring and early summer, when Booms and I are around, they have molted and are a mottled brown. Their camouflage is extremely effective: Ptarmigan have a heart-stopping habit of hunkering down until you are just a few feet away, then bursting out in a mad flurry of wings. Females lay up to 11 eggs per year on average, and their chicks are precocial: They are alert and can run around almost as soon as they hatch. Once the birds learn to fly, they flee with their parents; but until then, they scatter underfoot, and the tundra seems to crawl with them. Occasionally, a ptarmigan chick will use a human boot as a makeshift shelter and huddle against it, pretending to be invisible.

The relationship between gyrfalcons and willow ptarmigan rivals that of some of the worlds most famous predator-prey pairings: the lynx and snowshoe hare, for instance, or the sperm whale and the giant squid. Depending on location, ptarmigan compose up to 95 percent of the gyrfalcons diet. Booms says a single pair of the raptors can significantly depress local ptarmigan numbers. 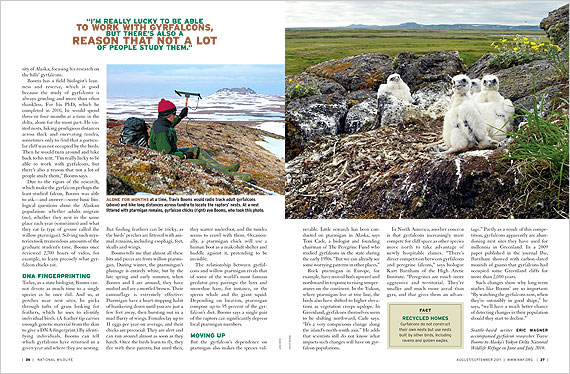 But the gyrfalcons dependence on ptarmigan also makes the species vulnerable. Little research has been conducted on ptarmigan in Alaska, says Tom Cade, a biologist and founding chairman of The Peregrine Fund who studied gyrfalcons in the state during the early 1950s. But we can already see some worrying patterns in other places.
Rock ptarmigan in Europe, for example, have moved both upward and northward in response to rising temperatures on the continent. In the Yukon, where ptarmigan live at tree line, the birds also have shifted to higher elevations as vegetation creeps upslope. In Greenland, gyrfalcons themselves seem to be shifting northward, Cade says. Its a very conspicuous change along the islands north-south axis. He adds that scientists still do not know what impacts such changes will have on gyrfalcon populations.

In North America, another concern is that gyrfalcons increasingly must compete for cliff space as other species move north to take advantage of newly hospitable climes. There's direct competition between gyrfalcons and peregrine falcons, says biologist Kurt Burnham of the High Arctic Institute. Peregrines are much more aggressive and territorial. They're smaller and much more aerial than gyrs, and that gives them an advantage. Partly as a result of this competition, gyrfalcons apparently are abandoning nest sites they have used for millennia in Greenland. In a 2009 paper published in the journal Ibis, Burnham showed with carbon-dated mounds of guano that gyrfalcons had occupied some Greenland cliffs for more than 2,000 years.

Such changes show why long-term studies like Booms are so important: By watching the gyrfalcons now, when they're ostensibly in good shape, he says, well have a much better chance of detecting changes in their population should they start to decline.