Theodore Roosevelt, one of the first U.S. spokesmen for wildlife and habitat protection, is the subject of a new book about his early years

A President in the NWF Conservation Hall of Fame

Of the 44 presidents who have led the nation, only one has found a place in the NWF Conservation Hall of Fame, established in 1963: Theodore Roosevelt, approved by NWF’s board of directors as the first inductee later that year. During his presidency, Roosevelt established the U.S. Forest Service, the nation's first national wildlife refuges, 5 national parks and 18 national monuments. "He didn't invent conservation," observed National Wildlife magazine in the August/September 1964 issue. "But what he did was channel the various streams of activity into a single river that, with direction and momentum, could no longer be ignored." 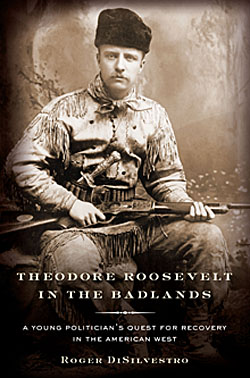 Roosevelt has been joined in the Conservation Hall of Fame, housed at the Federation's headquarters in Virginia, by 30 other Americans honored posthumously by the Federation's board. "They are all sources not only of invaluable knowledge and achievements, but also of great inspiration," says NWF President Larry Schweiger.

A New Book on Roosevelt, Rancher and Conservationist

The story of the formative events leading to Roosevelt’s development as a conservationist is told in a new book, Theodore Roosevelt in the Badlands, by Senior Editor Roger Di Silvestro of National Wildlife magazine. The volume chronicles the turbulent years Roosevelt spent as a rancher in the Badlands of Dakota Territory, during which the character and commitment of the future president and conservationist took shape, leading to his first actions on behalf of wildlife.

On February 12, 1884—when Roosevelt was building a career as New York State’s most promising young politician—his wife gave birth to their first child, Alice.  Two days later, both his wife and his mother died in the same house, on Valentine’s Day. Grief stricken—and riven by doubts about his career after failed attempts as a reform politician—Roosevelt left Alice in his sister’s care and went to live on a Badlands ranch he had bought six months earlier. He spent much of the next three years working alongside his ranch managers and hired hands, growing to love and respect frontier life and to find in the West both physical health and emotional stamina.

Drawing on Roosevelt’s own accounts and on diverse archives, Di Silvestro describes how Roosevelt’s spirit and political dynamism were forged during roundups, bronco busting, fist fights, grizzly bear hunts and encounters with horse thieves, hostile Indians, and vigilante justice. In the dramatic life of Theodore Roosevelt, few adventures exceeded those that he found in the Badlands. “I owe more than I can ever express to the West, which of course means to the men and women I met in the West,” Roosevelt declared.


Theodore Roosevelt in the Badlands is due in stores March 15 and can be pre-ordered now on Amazon.com.

See a special President's Day blog on leadership in animals