Environment: The Trouble with Fracking

The fossil-fuel industry is using secret chemical formulas to drain natural gas, keeping residents in the dark about the risks 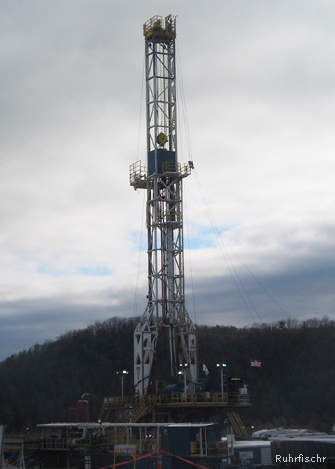 SHORTLY BEFORE MIDNIGHT last April 19, residents near Leroy Township, Pennsylvania, were jolted by a frenzy of activity. A natural gas well on a nearby farm had blown out, spewing thousands of gallons of toxic water and chemicals over fields and into a tributary of the Susquehanna River. Nearby families evacuated as first responders scrambled to rebuild a failed earthen berm and mobilize a fleet of vacuum trucks to keep the liquid from spreading. No one was quite sure how to stop the roughly 10,000 gallons of toxic wastewater that ultimately spilled, so, as the waster rushed out, local officials waited 11 hours for a specialized team to fly in from Texas.

The disaster was one of at least four major spills and accidents that have struck Pennsylvania during the past several years in the wake of intensifying natural gas drilling. The incident highlights not just the hazards that drilling poses to wildlife, farmers and residents but also the challenges that regulators face in trying to ensure safe development.

Since the 1970s, geologists and energy companies have eyed the vast amounts of natural gas—federal estimates now say more than 750 trillion cubic feet of it—trapped deep underground in shale at various sites across the nation. Tapping into this supply became affordable only in the past decade or so with improvements in a drilling technique called hydraulic fracturing, or fracking, which injects massive amounts of water and sand laced with chemicals into the ground to shatter the shale and release the gas. Under federal law, the companies do not have to reveal the chemicals they use, with the result that state and federal officials sometimes do not even know what toxics are being put into the environment.

Some of the largest deposits of shale gas in the nation lie deep beneath Pennsylvania farmland. Many land owners in the region do not own the mineral rights to their land, while others have signed leases that promise large bonuses and royalties, putting control in the hands of drilling companies.

Pennsylvania officials later said damage to aquatic life from the Leroy blowout was small. However, Maryland officials, whose state line lies roughly 200 miles from the blowout, notified the drilling company, Chesapeake Energy, that they intended to sue. The Maryland officials alleged that the spill contaminated water and sediment downstream, jeopardizing recreational use of the waterways as well as drinking water. In addition, officials from the U.S. Environmental Protection Agency (EPA) announced in June that tests showed three of seven nearby water wells were contaminated.

The speed with which drilling is taking place increases the potential risks. Some energy analysts warn that to help replace infamously dirty coal with natural gas, which burns relatively cleanly, will require possibly 30,000 new wells across the United States yearly. Each fracked well needs a well pad, a massive wastewater pool and a flat clearing that must be carved out of forests and farms.

“We are most concerned about impacts to local water supplies,” says NWF Vice President of Wildlife Conservation John Kostyack, adding that greenhouse gas emissions and habitat fragmentation caused by construction also are major concerns. “Federal, state and local regulators do not yet have a legal framework in place to protect people and wildlife from irresponsible gas development.”

Across the Northeast—beneath which lies one of the biggest shale fields, the Marcellus Formation—residents are dealing with new challenges. Late in 2008, for example, millions of gallons of wastewater from natural gas production and coal mines flowed into Pennsylvania’s Monongahela River during a drought; state officials responded merely by advising area residents to drink bottled water. According to the New York Times, EPA officials described this reaction as “one of the largest failures in U.S. history to supply clean drinking water to the public.”

Donald and Carol Johnson, who leased out the mineral rights to their farm outside Wellsboro, Pennsylvania, more than 30 years ago, know such impacts all too well. “We were in the pasture working one day, and my husband noticed the ground was soggy,” says Carol Johnson, describing how she and Donald discovered the effects in summer 2010 of a 2-foot tear that had opened in the liner of a dirt pit used to store fracking wastewater on their land. After the water spilled into a pasture, state officials ordered a quarantine of their beef cattle, believed to have drunk the contaminated salty water. Among these animals, the number of calves that died or were stillborn more than doubled the following year, Carol Johnson says. Officials advised the couple that their drinking water also could be contaminated and urged them to buy bottled water, which they did for more than a month without compensation from the company until test results cleared their water.

As fast as drilling is growing, so too is a grass-roots response to it. In Pennsylvania, citizens groups have launched lawsuits to curb potentially unsafe wastewater disposal practices. The Pittsburgh City Council adopted a ban on fracking within city limits, and Congress is now considering a law that would require drilling companies to disclose information about their fracking chemicals. “If fracking is going to have a safe future as part of our economy,” Kostyack says, “then it needs stronger regulations to combat the sort of spills we’ve seen in Pennsylvania.”

NWF is working for enactment of the federal Fracturing Responsibility and Awareness of Chemicals Act, which would put regulation of hydraulic fracturing under the protections of the Safe Drinking Water Act and require energy companies to disclose toxic chemicals used in fracking. The Federation also seeks to stop other dirty practices of the fossil fuel industry, such as tar-sands oil extraction, one of the most destructive fossil fuel sources in the world.

Sharon Kelly is an attorney in Pennsylvania who has been researching the impacts of natural gas extraction and fracking for more than a year.