Whales In a Warming Sea 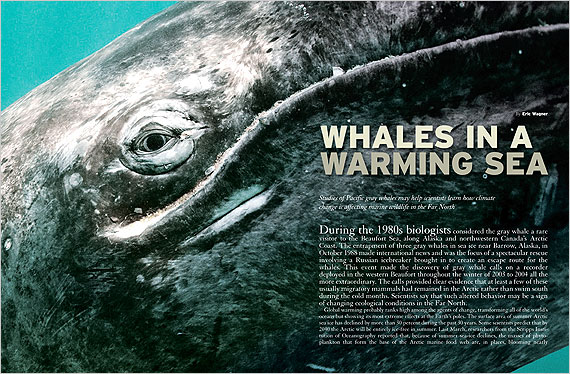 DURING THE 1980s biologists considered the gray whale a rare visitor to the Beaufort Sea, along Alaska and northwestern Canada’s Arctic Coast. The entrapment of three gray whales in sea ice near Barrow, Alaska, in October 1988 made international news and was the focus of a spectacular rescue involving a Russian icebreaker brought in to create an escape route for the whales. This event made the discovery of gray whale calls on a recorder deployed in the western Beaufort throughout the winter of 2003 to 2004 all the more extraordinary. The calls provided clear evidence that at least a few of these usually migratory mammals had remained in the Arctic rather than swim south during the cold months. Scientists say that such altered behavior may be a sign of changing ecological conditions in the Far North.

Global warming probably ranks high among the agents of change, transforming all of the world’s oceans but showing its most extreme effects at the Earth’s poles. The surface area of summer Arctic sea ice has declined by more than 30 percent during the past 30 years. Some scientists predict that by 2040 the Arctic will be entirely ice-free in summer. Last March, researchers from the Scripps Institution of Oceanography reported that, because of summer sea-ice declines, the masses of phytoplankton that form the base of the Arctic marine food web are, in places, blooming nearly two months earlier than usual.

Such disruptions could ripple throughout the Arctic’s biological community, affecting everything from the plankton to whales. As a result, the study of whales is becoming increasingly important to understanding ecological change in the Arctic. Because they are among the most closely studied whales on the planet, grays are “ideal ecosystem sentinels,” says Sue Moore, a federal biologist with the National Oceanic and Atmospheric Administration (NOAA) in Seattle who has studied the species for the past three decades. By watching how the animals shift their distribution and behavior, including migration time and food choices, scientists can use them to track changes in whale habitat, she says. 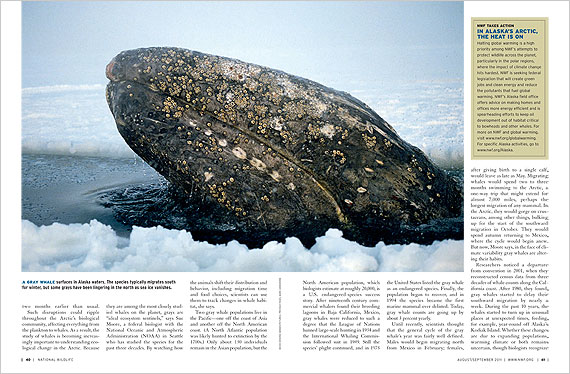 Two gray whale populations live in the Pacific—one off the coast of Asia and another off the North American coast. (A North Atlantic population was likely hunted to extinction by the 1700s.) Only about 130 individuals remain in the Asian population, but the North American population, which biologists estimate at roughly 20,000, is a U.S. endangered-species success story. After nineteenth century commercial whalers found their breeding lagoons in Baja California, Mexico, gray whales were reduced to such a degree that the League of Nations banned large-scale hunting in 1934 and the International Whaling Commission followed suit in 1949. Still the species’ plight continued, and in 1973 the United States listed the gray whale as an endangered species. Finally, the population began to recover, and in 1994 the species became the first marine mammal ever delisted. Today, gray whale counts are going up by about 3 percent yearly.

Until recently, scientists thought that the general cycle of the gray whale’s year was fairly well defined. Males would begin migrating north from Mexico in February; females, after giving birth to a single calf, would leave as late as May. Migrating whales would spend two to three months swimming to the Arctic, a one-way trip that might extend for almost 7,000 miles, perhaps the longest migration of any mammal. In the Arctic, they would gorge on crustaceans, among other things, bulking up for the start of the southward migration in October. They would spend autumn returning to Mexico, where the cycle would begin anew. But now, Moore says, in the face of climate variability gray whales are altering their habits. 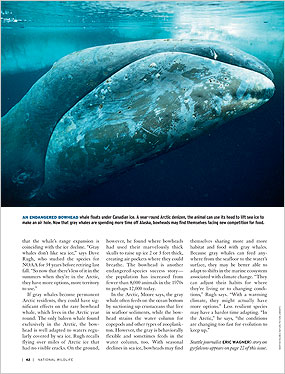 Researchers noticed a departure from convention in 2001, when they reconstructed census data from three decades of whale counts along the California coast. After 1980, they found, gray whales started to delay their southward migration by nearly a week. During the past 10 years, the whales started to turn up in unusual places at unexpected times, feeding, for example, year-round off Alaska’s Kodiak Island. Whether these changes are due to expanding populations, warming climate or both remains uncertain, though biologists recognize that the whale’s range expansion is coinciding with the ice decline. “Gray whales don’t like sea ice,” says Dave Rugh, who studied the species for NOAA for 34 years before retiring last fall. “So now that there’s less of it in the summers when they’re in the Arctic, they have more options, more territory to use.”

If gray whales become permanent Arctic residents, they could have significant effects on the rare bowhead whale, which lives in the Arctic year round. The only baleen whale found exclusively in the Arctic, the bowhead is well adapted to waters regularly covered by sea ice. Rugh recalls flying over miles of Arctic ice that had no visible cracks. On the ground, however, he found where bowheads had used their marvelously thick skulls to raise up ice 2 or 3 feet thick, creating air pockets where they could breathe. The bowhead is another endangered-species success story—the population has increased from fewer than 8,000 animals in the 1970s to perhaps 12,000 today.

In the Arctic, Moore says, the gray whale often feeds on the ocean bottom by suctioning up crustaceans that live in seafloor sediments, while the bowhead strains the water column for copepods and other types of zooplankton. However, the gray is behaviorally flexible and sometimes feeds in the water column, too. With seasonal declines in sea ice, bowheads may find themselves sharing more and more habitat and food with gray whales. Because gray whales can feed anywhere from the seafloor to the water’s surface, they may be better able to adapt to shifts in the marine ecosystem associated with climate change. “They can adjust their habits for where they’re living or to changing conditions,” Rugh says. “With a warming climate, they might actually have more options.” Less resilient species may have a harder time adapting. “In the Arctic,” he says, “the conditions are changing too fast for evolution to keep up.”

In Alaska’s Arctic, The Heat Is On
Halting global warming is a high priority among NWF’s attempts to protect wildlife across the planet, particularly in the polar regions, where the impact of climate change hits hardest. NWF is seeking federal legislation that will create green jobs and clean energy and reduce the pollutants that fuel global warming. NWF’s Alaska field office offers advice on making homes and offices more energy efficient and is spearheading efforts to keep oil development out of habitat critical to bowheads and other whales. For more on NWF and global warming, visit www.nwf.org/globalwarming. For specific Alaska activities, go to www.nwf.org/Alaska.