These striped rodents emit squeaks that other animals monitor for warnings, but those aren’t the only danger signals chipmunks are sending 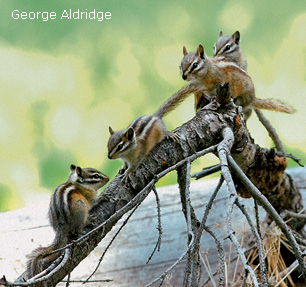 IF YOU LIVE IN A WOODED REGION of the United States, odds are you will step out of your house one day, hear a squeak coming from the ground and catch sight of a blurred brown streak disappearing down a hole. The streak is a chipmunk; the squeak is an alarm call issued because of you. New research suggests, however, that the chipmunk may carry a warning not only about you, but for you.

Kenneth Schmidt, a biologist at Texas Tech University who studies eastern chipmunks, recognizes three chipmunk calls: “the chip, the deeper chuck and the startle call.” This chatter, meant for other chipmunks, sometimes sends messages to other species, too. For example, chipmunks nosh opportunistically on eggs and nestlings. Particularly vulnerable are two ground-nesting birds: the ovenbird and the veery, a type of thrush that also nests in shrubs up to 3 feet off the ground. Schmidt’s studies indicate that these birds avoid areas where they hear chipmunks. Veeries nested an average of more than 30 feet farther from such areas than from zones lacking chipmunks, according to Quinn Emmering, a Texas Tech doctoral student who worked with Schmidt on the study. Ovenbirds avoided call zones by up to 65 feet.

Birds may heed warnings from chipmunks, but should we? Craig Frank, an associate professor of biology at New York’s Fordham University, may have an answer to that question.

Although chipmunks hibernate, they don’t sleep away the entire winter. Instead, they go into bouts of torpor interrupted by brief periods of high metabolic rates and body temperatures during which the animals move around, feed and excrete.

Frank puts transmitters that measure skin temperature on wild chipmunks at the Fordham University field station, where he has monitored hibernating chipmunks since 2000. In 2001 and 2006 the research area was subject to record warmth in November and December. “This was also reflected in the animals’ behavior,” Frank says. A 0.9 to 19-degree F increase in mean air temperature during November and December corresponded with an average 37.5-day delay in the first onset of torpor bouts, a 60 percent reduction in the number of individuals that went into torpor, and an 88 percent decrease in the total amount of time spent in torpor among those individuals that did hibernate. The telemetry equipment, Frank says, revealed that “not hibernating caused most of the animals to die.” When the rodents go into normal torpor, 90 percent survive winter. When they don’t, 80 to 90 percent die.

Since the winter of 2006 to 2007, Frank hasn’t seen chipmunks hibernate regularly at his study site. He fears dire times ahead for the world’s 90 hibernating mammal species. “Very little is known about how climate changes influence mammalian communities, but investigations over the past five years have suggested that species that use hibernation to survive the winter may be particularly sensitive to it,” Frank says. As such, chipmunks serve as one more warning that global warming is closing in.

Roger Di Silvestro’s most recent book is about the Badlands years of NWF Conservation Hall of Fame honoree Theodore Roosevelt.