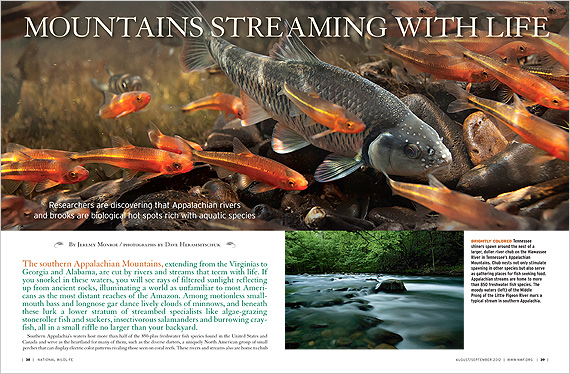 THE SOUTHERN APPALACHIAN MOUNTAINS, extending from the Virginias to Georgia and Alabama, are cut by rivers and streams that teem with life. If you snorkel in these waters, you will see rays of filtered sunlight reflecting up from ancient rocks, illuminating a world as unfamiliar to most Americans as the most distant reaches of the Amazon. Among motionless smallmouth bass and longnose gar dance lively clouds of minnows, and beneath these lurk a lower stratum of streambed specialists like algae-grazing stoneroller fish and suckers, insectivorous salamanders and burrowing crayfish, all in a small riffle no larger than your backyard.

A Wealth of Species 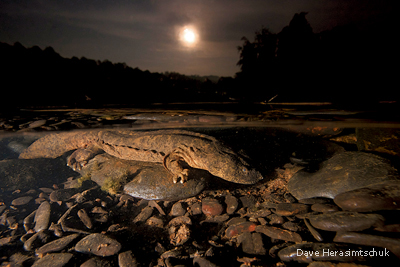 Southern Appalachia’s waters host more than half of the 850-plus freshwater fish species found in the United States and Canada and serve as the heartland for many of them, such as the diverse darters, a uniquely North American group of small perches that can display electric color patterns rivaling those seen on coral reefs. These rivers and streams also are home to chub that build mounded gravel nests, which in turn spark springtime spawning in other fishes. Several minnow species may simultaneously use the nests to spawn and lay eggs, while other fishes may show up simply to forage for food. More than 600 mussel and snail species and some 250 species of crayfish also inhabit these waters—the world’s richest regional array of these creatures, including species found nowhere else. Also a hot spot of salamander diversity, southern Appalachia is a stronghold for North America’s largest salamander, the hellbender (above), which lives entirely underwater and can grow up to 2 feet long on a diet of crayfish and small fish.

During the past century, however, southern Appalachian rivers and their inhabitants have experienced rapid environmental change. For the majority of southern Appalachian river-dwelling species, the multitude of large dams throughout the region brings perhaps the most devastating human impact. By breaking rivers into intermittent chains of reservoirs, dams block animal movement and migration. The scattered remnants of flowing waters around these reservoirs are commonly smaller tributary streams that face a host of other pressures.

Sedimentation and pollution from mining, agriculture and urbanization bring everyday impacts to many of these waters, along with the occasional catastrophic spill such as the hundreds of millions of gallons of coal ash that washed into Tennessee’s Emory River from a coal-fired power plant in 2008, causing fish kills and metal contamination for miles downstream. “Between the threats of development, industrial use and now additional stresses from climate change, many of these fragile mountain streams and rivers are under particular threat,” says Tony Caligiuri, NWF’s Mid-Atlantic regional director. 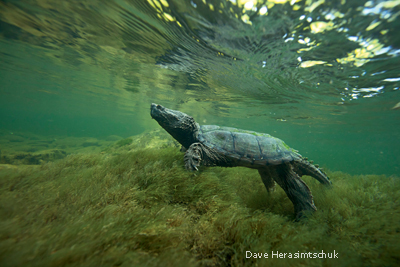 With the barriers posed by dams and reservoirs, species are unable naturally to repopulate streams where they have died out. As a result, rates of imperilment in this region are relatively high, particularly for certain large river fishes such as sturgeons and for some invertebrate groups such as crayfish and mollusks. The U.S. Fish and Wildlife Service recently received petitions for listing more than 300 southeastern aquatic species under the U.S. Endangered Species Act. “The freshwater mussels are really the canary in the coal mine for aquatic biodiversity right now,” says Anna George, director of the Tennessee Aquarium Conservation Institute. “At the moment, roughly 75 percent of our mussel species are considered at threat of extinction because of human impacts on the environment.”

The Tennessee River basin, home to a network of impoundments that includes the Tellico Dam—notorious for jeopardizing the snail darter, one of the first species federally listed as endangered—illustrates how river fragmentation imperils species. Large river fish, for example, need free-flowing, main-stem rivers to move and migrate. “There used to be lake sturgeons in Tennessee,” says retired University of Tennessee biologist David Etnier, referring to a bottom-feeding fish of ancient lineage that can grow to 9 feet long and about 400 pounds. “They’re gone—they couldn’t stand the impoundments, they disappeared.”

Even species inhabiting tributaries less affected by dams, such as hellbenders, have lost most of their historic habitat because of streambed siltation and declines in water quality from streamside homebuilding, road construction, farming and mining. 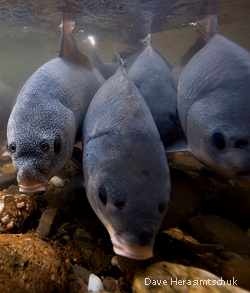 The risk of species loss has motivated an effort to establish more than  half a dozen captive-breeding programs across the southeastern states for endangered, threatened or otherwise vulnerable animals. “I look at our work as a Band-Aid approach,” says J.R. Shute, co-director of Conservation Fisheries, Inc. (CFI), a nonprofit organization dedicated to breeding, raising and reintroducing threatened and endangered fishes from its rearing facility in Knoxville, Tennessee. “It can only be useful if there’s habitat to put the fish back into. Some of these fish are so rare that we probably have more of them in our facility than exist in the wild, but if a stream is cleaned up, it allows us the opportunity to go back in and replace the fish that were lost.”

Two of those rare fish—the smoky madtom and yellowfin madtom—were assumed extinct as recently as the 1970s, but, thanks to CFI’s captive-breeding and reintroduction work, they have been reestablished successfully at Abrams Creek and some neighboring streams in the Great Smoky Mountains.

A similar reintroduction project is under way on the Pigeon River that flows from the mountains of North Carolina into Tennessee. Polluted by paper-mill discharges beginning in 1907, the river assumed a coffee color. Dam construction added to the river’s decay. In recent years the North Carolina Wildlife Resources Commission documented the extinction of all the river’s native snails and mussels and the survival only of fish particularly tolerant to pollution, such as nonnative carp. In the early 1980s the U.S. Environmental Protection Agency stepped in after the state of Tennessee sued for cleanup. New regulations on paper-mill effluents turned the river around, though problems still occur: As recently as 2007, some 8,000 fish died in one day from hot water released into the river by a paper mill. 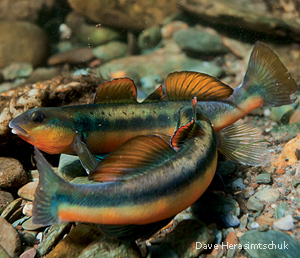 But the river is improving. “Ten or fifteen years ago if somebody had said something about reintroducing species in there I would’ve laughed—it was a dead river,” Shute says. “And then they made changes at the paper company, and the river’s come back, and there’s actually some fish that have been restored.” Wildlife agencies also reintroduced native mussels and snails. “We are encouraged by the prospects for restoring many disappearing species. Nature has proved to be quite resilient if we are just willing to meet her halfway,” Caligiuri says.

“The hardest part of protecting southeastern biodiversity is simply just a lack of awareness that what we have is so special,” George says. Biologists venturing farther into southeastern streams are constantly discovering new species, bringing to light the special nature of southern Appalachia and offering a better understanding of the measures needed to protect the region. For example, in 2010 a Tennessee Valley Authority biologist discovered a crayfish in a small Tennessee River tributary that turned out not only to be a new species but one of North America’s largest crayfish. “There’s incredible biodiversity in this part of the world, and we aren’t even close to understanding it,” says Etnier, who in the early 1970s described the snail darter. “Yeah, there’s more stuff to discover out there. There sure is.”

Millions of people can easily access the Appalachians, and the region is home to globally significant pockets of biodiversity. NWF has initiated a campaign to protect and restore priority Appalachian habitats imperiled by threats such as sprawl, climate change, unsustainable forestry and energy development. “This is America’s first backyard,” says George Gay, NWF Northeastern Regional Center senior manager. “NWF has a bold vision: A mosaic of connected forests and waters that are home to thriving native wildlife populations in the Appalachian Mountains and nearby lands. We will roll out a palette of activities to inspire and engage citizens to help create a sustainable wildlife corridor stretching from Alabama to Maine.”

Help make a different for wildlife in Appalachia and across the country by supporting NWF today.

Jeremy Monroe is an aquatic biologist and director of Freshwaters Illustrated, a nonprofit conservation group. Dave Herasimtschuk is a photographer and biologist specializing in freshwater biodiversity.