How Rattesnake Fossils Teach Us about the Future 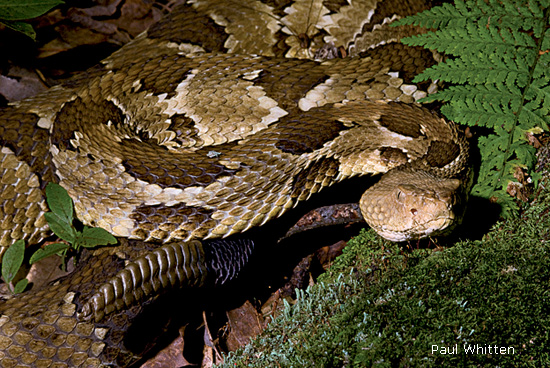 HOW SPECIES WILL ADAPT to a rapidly warming planet is one of the great questions of conservation biology. Wildlife species have been adapting to shifting climates since time immemorial. Three ice ages have come and gone in just the past 320,000 years, with average global surface temperature varying by 10.8 to 14.4 degrees F during that time. Because the ways in which species have adapted in the past offer clues to how they will adapt in the future, two researchers at Indiana University–Bloomington, A. Michelle Lawing and P. David Polly, have been looking at how rattlesnakes survived climate change in the past. What they are learning could help guide conservation measures designed to combat the effects of global warming.

What Rattlesnakes Tell Us

Snakes are particularly useful for understanding the effects of climate change on land animals, the researchers report in the online journal PLoS ONE, because reptiles, as cold-blooded animals, are especially sensitive to temperature variability. “Rattlesnakes have diversified highly in North America and are adapted to a range of climates available,” Lawing says. “They also are large for North American snakes and so may be exposed to more environments through their movements.”

Using data from climate models and the geological record as well as information on rattlesnake distribution today, Lawing and Polly mapped in 4,000-year intervals the expansion and contraction of the ranges of 11 North American rattlesnake species during the past 320,000 years. Their calculations indicate that rattlesnakes adapted to climate change by shifting their ranges an average of 7.5 feet a year, moving north as climate warmed, south as it cooled.

The Intergovernmental Panel on Climate Change predicts that the globe will warm by 1.98 to 11.5 degrees F during the next 90 years. This rate of warming would match temperature rises such as those that brought the last ice age to a close—but the latter took about 5,000 years to transpire. The speed of current increases may be unmatched for the past 50 million years, according to the National Oceanic and Atmospheric Administration.

Increasing temperatures will affect rattlers by eliminating or compressing suitable habitat. The timber rattlesnake, for example, is now found throughout the eastern United States. Lawing and Polly predict that, with a temperature increase of 1.98 degrees F over the next 90 years, the species’ range would expand slightly in New York, New England and Texas in part because of increased precipitation—a plus for the snake. But an increase of 11.5 degrees would shrink the range to a small area on the Tennessee-North Carolina border where mountain elevations would provide a cooler refuge with more rainfall than would occur at lower levels. Under the same scenario, the eastern diamondback rattlesnake—already declining from the effects of habitat destruction—would lose all of its current range in the Southeast.

Lawing and Polly calculate that surviving the predicted changes requires rattlers to shift their ranges by as many as 1.5 miles a year—far in excess of the 7.5 feet average of the past 320 millennia. “We find that, over the next 90 years, at best these species’ ranges will change more than 100 times faster than they have during the past 320,000 years,” says Lawing, lead author of the paper. “This rate of change is unlike anything these species have experienced, probably since their formation.” Even in scenarios in which the extent of suitable habitat increases, the snakes may not be able to move quickly enough, leading to genetic bottlenecks that could lead to extinction.

The researchers suggest that creation of habitat corridors and relocation of rattlesnakes from damaged to suitable habitat may help some species to survive. Comparable measures may be needed to save many other wildlife species facing the same threat.