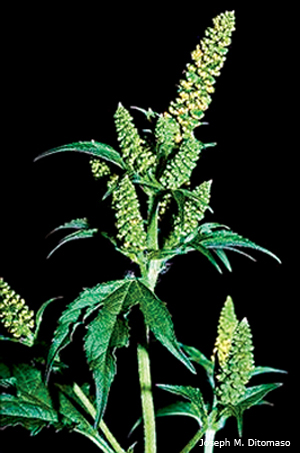 PLANT PHYSIOLOGIST LEWIS ZISKA boldly goes where others fear they’ll sneeze. A long-time allergy sufferer at the U.S. Department of Agriculture’s Crop Systems and Global Change Laboratory in Maryland, Ziska has spent years studying why respiratory allergies seem to be growing worse in the United States. His chief suspect: carbon dioxide (CO2)—the gas that is flooding from factory chimneys, motor vehicle tailpipes and other sources into the atmosphere, trapping sunlight and fueling global warming. It is also essential for photosynthesis, the process by which plants convert sunlight into energy. “CO2 is one of the resources that plants need in order to grow,” Ziska says.

He has long been interested in how burgeoning carbon dioxide in the atmosphere affects plants. A few years ago, his research showed that projected increases of the atmospheric gas will likely enhance the growth rate and toxicity of poison ivy, rendering that plant both bigger and badder. He cultivated poison ivy in chambers that matched atmospheric carbon dioxide levels in 1950, about 300 parts per million (ppm); levels today, about 400 ppm; and levels that climatologists anticipate for the end of the century, about 600 ppm. Plants growing under today’s condition doubled in size compared to 1950 plants; those growing at 600 ppm tripled in size. Poison ivy grown with enhanced carbon dioxide levels also produced more potent urushiol, the chemical that causes a rash in 80 percent of people who come in contact with the plant.

Ziska’s newer research shows that, in parts of North America, rising carbon dioxide levels are increasing local temperatures and extending the growing season for ragweed, the plant responsible for 90 percent of pollen-related allergies in this country. To see how ragweed, a hayfever plague for at least 10 percent of the U.S. population, might respond to rising atmospheric carbon dioxide levels and warmer temperatures, Ziska compared city ragweed to its country cousin. “We used the city as sort of a surrogate for global warming,” Ziska says. Urban areas not only absorb and trap more heat than do rural areas but also bear higher concentrations of carbon dioxide in the air. Ziska and his colleagues found that ragweed in Baltimore, Maryland, grew faster, flowered earlier and pumped out more pollen than did rural ragweed.

How Ragweed is Changing Nationally

Ziska also investigated whether ragweed was responding to climate change on a continental scale. He suspected the answer would be tied to ragweed’s geographic location. “When you look at how the globe is warming, it’s not warming the same everywhere,” Ziska says. “It’s warming more at the poles than it is at the Equator.” He hypothesized that if ragweed is responding to carbon dioxide and warming on a large geographical scale, that response “would show up as a function of latitude.”

His research team picked 10 North American locations along a north-south line stretching from Austin, Texas, to Saskatoon, Saskatchewan. For each of these sites, the team consulted data on local ragweed pollen counts going back to 1995. The researchers also looked at local weather records, in particular changes in the number of frost-free days, for the same time span.

Ziska says the records revealed “obvious” extensions in the ragweed season, with greater increases occurring the farther north he and his team looked. For example, while Oklahoma City registered a mere one-day increase in its ragweed season across the 15-year study period, La Crosse, Wisconsin’s, season expanded by 13 days. Ragweed in Fargo, North Dakota, now blooms—and sheds pollen into the air—16 days longer than it used to do. And in Saskatoon, the northernmost spot in the study, ragweed season lasts nearly a month longer than in years past. The scientists also found correspondingly greater increases in the length of the frost-free season the farther north they looked.

Pressure on Plants in General

Ziska’s research is reflected in the U.S. Department of Agriculture’s new edition of its map of plant-hardiness zones, which are based on minimum winter temperatures. Warmer zones are marching steadily northward, so that plants that wouldn’t have survived through the winter in some areas just 20 years ago are now making it just fine. The first update since 1990, the new map, released last January, catapults nearly entire states into warmer zones, particularly in the Great Plains.

For gardeners yearning to bring a hint of the Tropics to their flower beds, a longer growing season for plants could be cause to celebrate. But the seasonal changes also can introduce new challenges, says Amanda Staudt, NWF global warming scientist. “Summertime heat and humidity have been increasing, and droughts are becoming more severe,” she says. “The bottom line is that while you may be able to grow some new plants, some old favorites may have a harder time as summer temperatures increase and precipitation patterns change.”

As Ziska’s work shows, climate changes are pounding just as hard on gardeners and other people as on vulnerable plants. If you happen to be one of the millions of Americans who suffer from hay fever, his work suggests that life on this warming planet almost certainly promises to bring more misery your way.

NWF in Action: Putting the Chill on Climate Change

Download NWF’s report Extreme Allergies and Global Warming and support NWF’s work to combat global warming and other threats to wildlife.
Based in Washington, D.C., Michael Lipske is a frequent contributor to National Wildlife.