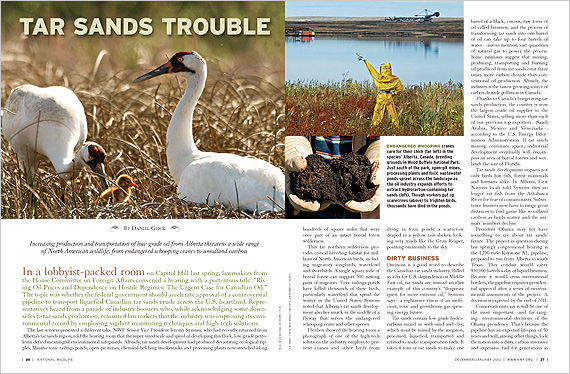 IN A LOBBYIST-PACKED ROOM on Capitol Hill last spring, lawmakers from the House Committee on Foreign Affairs convened a hearing with a portentous title: “Rising Oil Prices and Dependence on Hostile Regimes: The Urgent Case for Canadian Oil.” The topic was whether the federal government should accelerate approval of a controversial pipeline to transport liquefied Canadian tar sands crude across the U.S. heartland. Representatives heard from a parade of industry boosters who, while acknowledging some downsides to tar sands production, reassured lawmakers that the industry was improving its environmental record by employing vigilant monitoring techniques and high-tech solutions.

This far northern wilderness provides critical breeding habitat for millions of North American birds, including migratory songbirds, waterfowl and shorebirds. A single square mile of boreal forest can support 500 nesting pairs of migrants. Toxic tailings ponds have killed thousands of these birds, particularly waterfowl that spend the winter in the United States. Symons noted that Alberta’s tar sands development also lies smack in the middle of a flyway that serves the endangered whooping crane and other species.

He then showed the hearing room a photograph of one of the high-tech solutions the industry employs to prevent cranes and other birds from dying in toxic ponds: a scarecrow draped in a yellow rain slicker, looking very much like the Grim Reaper, pointing ominously to the sky. 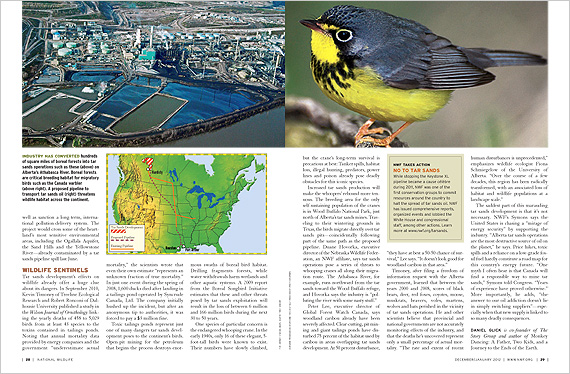 Ominous is a good word to describe the Canadian tar sands industry. Billed as a fix for U.S. dependence on Middle East oil, tar sands are instead another example of this country’s “desperate quest for more extreme oil,” Symons says—a nightmare vision of an inefficient, toxic and greenhouse gas-spewing energy future.

Tar sands contain low-grade hydrocarbons mixed in with sand and clay, which must be mined by the megaton, processed, liquefied, transported and refined to make transportation fuels. It takes 4 tons of tar sands to make one barrel of a black, viscous, raw form of oil called bitumen, and the process of transforming tar sands into one barrel of oil can take up to four barrels of water—not to mention vast quantities of natural gas to power the process. Some estimates suggest that mining, producing, transporting and burning oil produced from tar sands emit three times more carbon dioxide than conventional oil production. Already, the  industry is the fastest growing source of carbon dioxide pollution in Canada.

Thanks to Canada’s burgeoning tar sands production, the country is now the largest crude oil supplier to the United States, selling more than each of our previous top exporters—Saudi Arabia, Mexico and Venezuela—according to the U.S. Energy Information Administration. If tar sands mining continues apace, industrial development eventually will encompass an area of boreal forests and wetlands the size of Florida.

Tar sands development impacts not only birds but fish, forest mammals and humans alike. In Alberta, First Nations locals told Symons they no longer eat fish from the Athabasca River for fear of contaminants. Subsistence hunters now have to range great distances to find game like woodland caribou as herds scatter and the animals’ numbers decline.

President Obama may yet have something to say about tar sands’ future. The project in question during last spring’s congressional hearing is the 1,700-mile Keystone XL pipeline, proposed to run from Alberta to south Texas. This conduit would carry 830,000 barrels a day of liquid bitumen. Because it would cross international borders, the pipeline requires presidential approval after a series of environmental assessments of the project. A decision is expected by the end of 2011.

Conservationists say it will be one of the most important—and far-ranging—environmental decisions of the Obama presidency. That’s because the pipeline has an expected lifespan of 50 years and will, among other things, lock the nation into a dirty, carbon-intensive and expensive fuel for generations as well as sanction a long-term, international pollution-delivery system. The project would cross some of the heartland’s most sensitive environmental areas, including the Ogallala Aquifer, the Sand Hills and the Yellowstone River—already contaminated by a tar sands pipeline spill last June.

Tar sands development’s effects on wildlife already offer a huge clue about its dangers. In September 2010, Kevin Timoney of Treeline Ecological Research and Robert Ronconi of Dalhousie University published a study in the Wilson Journal of Ornithology linking the yearly deaths of 458 to 5,029 birds from at least 43 species to the toxins contained in tailings ponds. Noting that annual mortality data provided by energy companies and the government “underestimate actual mortality,” the scientists wrote that even their own estimate “represents an unknown fraction of true mortality.” In just one event during the spring of 2008, 1,600 ducks died after landing in a tailings pond operated by Syncrude Canada, Ltd. The company initially hushed up the incident, but after an anonymous tip to authorities, it was forced to pay a $3 million fine.

Toxic tailings ponds represent just one of many dangers tar sands development poses to the continent’s birds. Open-pit mining for the petroleum that begins the process destroys enormous swaths of boreal bird habitat. Drilling fragments forests, while water withdrawals harm wetlands and other aquatic systems. A 2009 report from the Boreal Songbird Initiative estimates that these and other threats posed by tar sands exploitation will result in the loss of between 6 million and 166 million birds during the next 30 to 50 years.

One species of particular concern is the endangered whooping crane. In the early 1940s, only 16 of these elegant, 5-foot-tall birds were known to exist. Their numbers have slowly climbed, but the crane’s long-term survival is precarious at best: Tanker spills, habitat loss, illegal hunting, predators, power lines and poison already pose deadly obstacles for this iconic species.

Increased tar sands production will make the whoopers’ rebound more tenuous. The breeding area for the only self-sustaining population of the cranes is in Wood Buffalo National Park, just north of Alberta’s tar sands mines. Traveling to their wintering grounds in Texas, the birds migrate directly over tar sands pits—coincidentally following part of the same path as the proposed pipeline. Duane Hovorka, executive director of the Nebraska Wildlife Federation, an NWF affiliate, says tar sands operations pose a series of threats to whooping cranes all along their migration route. The Athabasca River, for example, runs northward from the tar sands toward the Wood Buffalo refuge, and Hovorka says the industry is “polluting the river with some nasty stuff.”

Peter Lee, executive director of Global Forest Watch Canada, says woodland caribou already have been severely affected. Clear-cutting, pit mining and giant tailings ponds have disturbed 75 percent of the habitat used by caribou in areas overlapping tar sands development. At 50 percent disturbance, “they have at best a 50-50 chance of survival,” Lee says. “It doesn’t look good for woodland caribou in that area.”

Timoney, after filing a freedom of information request with the Alberta government, learned that between the years 2000 and 2008, scores of black bears, deer, red foxes, coyotes, moose, muskrats, beavers, voles, martens, wolves and bats perished in the vicinity of tar sands operations. He and other scientists believe that provincial and national governments are not accurately monitoring effects of the industry, and that the deaths he’s uncovered represent only a small percentage of actual mortality. “The rate and extent of recent human disturbances is unprecedented,” emphasizes wildlife ecologist Fiona Schmiegelow of the University of Alberta. “Over the course of a few decades, this region has been radically transformed, with an associated loss of habitat and wildlife populations at a landscape scale.”

The saddest part of this marauding tar sands development is that it’s not necessary. NWF’s Symons says the United States is chasing a “mirage of energy security” by supporting the industry. “Alberta tar sands operations are the most destructive source of oil on the planet,” he says. Price hikes, toxic spills and a reliance on a low-grade fossil fuel hardly constitute a road map for this country’s energy future. “One myth I often hear is that Canada will find a responsible way to mine tar sands,” Symons told Congress. “Years of experience have proved otherwise.” More importantly, he adds, “the answer to our oil addiction doesn’t lie in simply switching suppliers”—especially when that new supply is linked to so many deadly consequences.

While stopping the Keystone XL pipeline became a cause célèbre during 2011, NWF was one of the first conservation groups to commit resources around the country to halt the spread of tar sands oil. NWF has issued comprehensive reports, organized events and lobbied the White House and congressional staff, among other actions.

UPDATE (11/10/11): On Thursday, November 10, the administration announced that a new Environmental Impact Statement will be ordered for the Keystone XL pipeline, which delays the project by at least a year and could end up killing it due to delays and the heightened scrutiny that will follow. To learn more, visit NWF's Media Center.


Daniel Glick is co-founder of The Story Group and author of  Monkey Dancing: A Father, Two Kids, and a Journey to the Ends of the Earth. Shortly after this article was published, he wrote a blog on the tar sands issue.