This leap year, celebrate what we are learning about these and other amazing animals that make the most of their self-catapulting capabilities 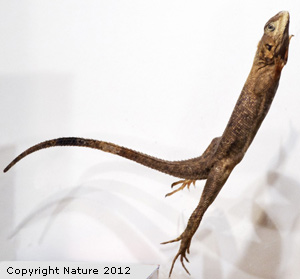 AS 2012 IS A LEAP YEAR, it’s the perfect time to appreciate animals that travel leaps and bounds better than us—as well as what we might learn from them. Comparative biologists and biomechanics are looking at how animals move for inspiration and are coming up with some amazing insights and inventions.

What Do Agama Lizards and Tailbots Have in Common?

Tails, of course! University of California at Berkeley scientists recently looked at how the tails of red-headed agama lizards from sub-Saharan Africa allow them to not only balance themselves but also adjust their bodies’ angles mid-leap to make successful landings. Robert Full, director of the Center for Interdisciplinary Bio-inspiration in Education and Research (CIBER) and his colleagues built a robot that has a tail and can imitate the lizards’ leaping maneuvers. The scientists discovered that if the “Tailbot” did not move its tail or only moved it slightly, it crashed. But if the robot adjusted its tail in flight to compensate, it landed successfully. (Watch the agama lizard and the Tailbot leaping.) The researchers are looking at how the tail controls the robot’s pitch, roll and yaw.

Full says this discovery could revolutionize the agility of robots, particularly those needed to help first responders during search-and-rescue missions, such as after earthquakes or explosions. “Right now, we can’t send robots into rubble or down a subway to help find people,” explains Full. “We are getting closer to doing that now. With this kind of agility, we are adding capabilities that are inspired by the motions of animals.”

He and his colleagues have also looked at how cockroaches run, crabs crawl and other animals leap to see how they might help make robots mobile as well as other applications. Leaping geckos, which can right themselves when falling similar to a cat only by swinging their tails, have sticky hairs on their toes that allow them to stick and then restick quickly, even to slick surfaces. The researchers are replicating this adhesive to build a better bandage that can be adjusted and reapplied like Velcro rather than using adhesives that can cause infections. Full says the applications of such an adhesive might be endless: “This type of adhesive could be used in every piece of clothing, in your cars, on your wall, everywhere.”

The researchers will continue to look throughout the animal kingdom for inspiration. As Full says, “Our motto is, ‘Diversity enables discovery.’ All of these animals have secrets; you just don’t know what they are. We care about all of them because one of them just might have that one secret that we are going to miss if that animal goes extinct. We desperately want to conserve them and their habitats because they all have these wonderful things we can learn.”

Here are some other animals that are quite skilled at getting around. Who knows what secrets we might learn from them? 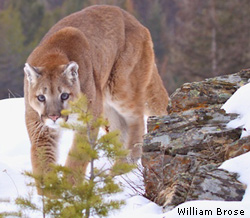 1. Mountain lions’ hind legs are larger and more muscular than their front legs. As ambush predators, they can jump 20 feet up or down a hillside to take their prey by surprise.

2. Red kangaroos can hop more than 35 miles per hour and leap as high as 9 feet. They use their tail like a fifth leg to balance as the two rear legs move forward simultaneously.

3. In spite of their heavy girth that should make them ground-bound, gibbons are remarkable jumpers, having developed a leaping technique that allows them to live in trees upwards of 230 feet high to avoid predators in the jungle below. Their long, flexible limbs and strong torso allow them to stretch considerably before taking off. They then crouch, lunge and using their long, heavy arms as pendulums, swing their weight forward. Their push-off distance that is far greater than other leaping primates and four times that of humans.

4. Spinner dolphins, found in the tropical and subtropical waters in the Atlantic, Indian and Pacific Oceans, can leap into the air and spin up to seven times in a second before landing back in the water. They begin their spins underwater by using their flippers like wings in a barrel roll, slowed by the resistance against the water. Once they leap out of the water, the dolphins spins like a wound top. Scientists still don’t know for sure why these dolphins do this, but some have suggested the spinning jostles remoras, a kind of suckerfish that attach themselves to the dolphins’ bodies, so that the fish are broken free when the dolphins hit the water.

5. The giant kangaroo rats of the Southwest United States are appropriately named. These jumping rodents are up to 16 inches long, nose to tail, and can travel more than 9 feet per second when avoiding predators.

6. The tiny 20-inch-tall African klipspringer antelopes are deceptively muscular and able rock climbers. With their blunt, rubbery hoofs, they can jump over crevices and up sheer cliffs.

7. Frogs have incredibly stretchy, strong muscles and tendons that store energy, allowing them to bound incredible distances. For example, the South African sharp-nosed frog is less than 3 inches long but can jump 11 feet, or 44 times its body length. (Test your frog knowledge by taking our frog quiz.) 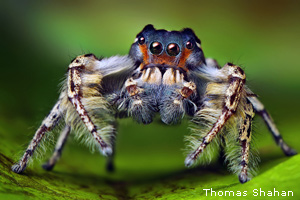 8. Jumping spiders have exceptional vision to track prey and judge jumping distances. When they do decide to attack, they use a hydraulic system that transfers body fluids to their legs to extend them so they can leap several times their own body length to their next meal.

9. British zoologist Henry Bennet-Clark thought that fleas had some internal springing mechanism in 1967, but only last year were Cambridge researchers able to confirm this with high-speed cameras. With large spines found near the insects' feet that grip the ground for traction and act like levers, fleas can launch at speeds as high as 6 feet per second.

10. However, the Olympic gold medal for the greatest jumpers is now being claimed by copepods. Denmark scientists revealed last year that these tiny aquatic critters, which are less than .08 of an inch long, can accelerate 500 body lengths per second.

So, don’t jump to conclusions that other animals have nothing to teach us. You never know from where the next leap in knowledge will come!