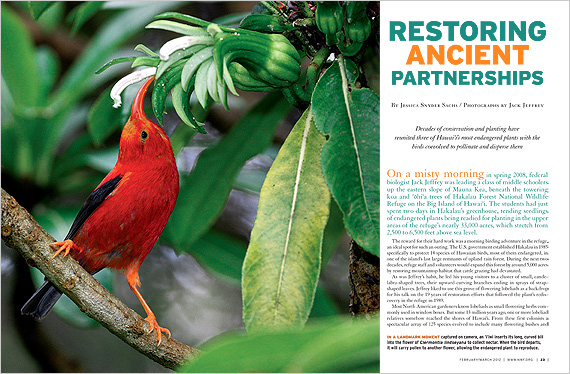 ON A MISTY MORNING IN SPRING 2008, federal biologist Jack Jeffrey was leading a class of middle schoolers up the eastern slope of Mauna Kea, beneath the towering koa and ‘ōhi‘a trees of Hakalau Forest National Wildlife Refuge on the Big Island of Hawai‘i. The students had just spent two days in Hakalau’s greenhouse, tending seedlings of endangered plants being readied for planting in the upper areas of the refuge’s nearly 33,000 acres, which stretch from 2,500 to 6,500 feet above sea level.

The reward for their hard work was a morning birding adventure in the refuge, an ideal spot for such an outing. The U.S. government established Hakalau in 1985 specifically to protect 14 species of Hawaiian birds, most of them endangered, in one of the island’s last large remnants of upland rain forest. During the next two decades, refuge staff and volunteers would expand this forest by around 5,000 acres by restoring mountaintop habitat that cattle grazing had devastated.

As was Jeffrey’s habit, he led his young visitors to a cluster of small, candelabra-shaped trees, their upward-curving branches ending in sprays of strap-shaped leaves. Jeffrey liked to use this grove of flowering lobeliads as a backdrop for his talk on the 19 years of restoration efforts that followed the plant’s rediscovery in the refuge in 1989.

Most North American gardeners know lobeliads as small flowering herbs commonly used in window boxes. But some 13 million years ago, one or more lobeliad relatives somehow reached the shores of Hawai‘i. From these first colonists a spectacular array of 125 species evolved to include many flowering bushes and trees—none of them found anywhere else on Earth. Among their unique features, many Hawaiian lobeliads evolved long tubular blossoms and fleshy fruit designed to be pollinated and dispersed by Hawaiian birds, many of which likewise are found nowhere else.

But like much of Hawai‘i’s unique flora, many of its lobeliads were decimated by pigs–first introduced by Polynesians–and by cattle, sheep and goats presented by 18th-century European explorers as gifts to Hawaiian royalty. Today many native lobeliads are extinct or cling to survival in precarious perches such as cliffs, out of the reach of these voracious grazing animals. 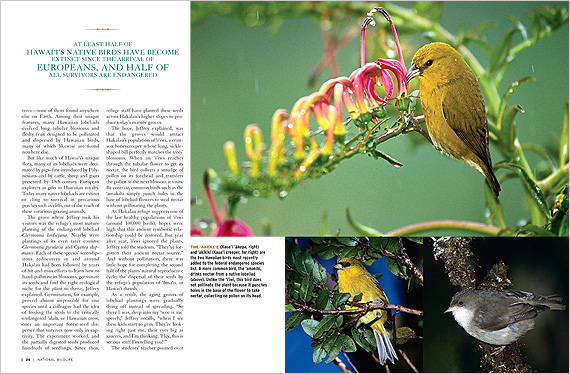 The grove where Jeffrey took his visitors was the refuge’s most mature planting of the endangered lobeliad Clermontia lindseyana. Nearby were plantings of its even rarer cousins: Clermontia pyrularia and Cyanea shipmanii. Each of these species’ serendipitous rediscovery in and around Hakalau had been followed by years of hit-and-miss efforts to learn how to hand-pollinate its blossoms, germinate its seeds and find the right ecological niche for the plant to thrive, Jeffrey explained. Germination, for example, proved almost impossible for one species until a colleague had the idea of feeding the seeds to the critically endangered ‘alalā, or Hawaiian crow, once an important forest-seed disperser that survives now only in captivity. The experiment worked, and the partially digested seeds produced hundreds of seedlings. Since then, refuge staff have planted these seeds across Hakalau’s higher slopes to produce today’s mature groves.

The hope, Jeffrey explained, was that the groves would attract Hakalau’s population of ‘i‘iwi, a crimson honeycreeper whose long, sickle-shaped bill perfectly matches the trees’ blossoms. When an ‘i‘iwi reaches through the tubular flower to get its nectar, the bird collects a smudge of pollen on its forehead and transfers the pollen to the next blossom it visits. By contrast, common birds such as the ‘amakihi simply punch holes in the base of lobeliad flowers to steal nectar without pollinating the plants. 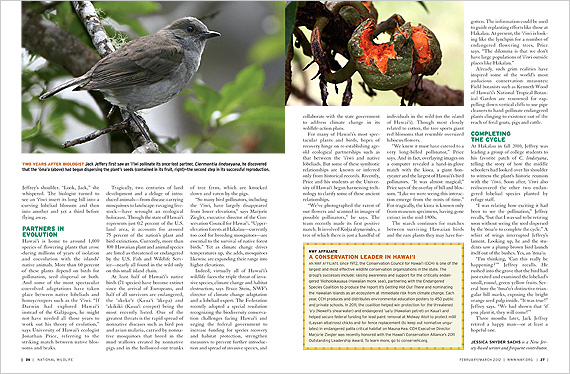 As Hakalau refuge supports one of the last healthy populations of ‘i‘iwi (around 100,000 birds), hopes were high that this ancient symbiotic relationship could be restored. But year after year, ‘i‘iwi ignored the plants, Jeffrey told the students. “They’ve forgotten their ancient nectar source.” And without pollination, there was little hope for completing the second half of the plants’ natural reproductive cycle: the dispersal of their seeds by the refuge’s population of ‘ōma‘o, or Hawai‘i thrush.

As a result, the aging groves of lobeliad plantings were gradually dying off instead of spreading. “So there I was, deep into my ‘woe is me’ speech,” Jeffrey recalls, “when I see these kids start to grin. They’re looking right past me, their eyes big as saucers, and I’m thinking, ‘Hey, this is serious stuff I’m telling you!’”

The students’ teacher pointed over Jeffrey’s shoulder. “Look, Jack,” she whispered. The biologist turned to see an ‘i‘iwi insert its long bill into a curving lobeliad blossom and then into another and yet a third before flying away.

Hawai‘i is home to around 1,000 species of flowering plants that arose during millions of years of isolation and coevolution with the islands’ native animals. More than 60 percent of these plants depend on birds for pollination, seed dispersal or both. And some of the most spectacular coevolved adaptations have taken place between native lobeliads and honeycreepers such as the ‘i‘iwi. “If Darwin had explored Hawai‘i instead of the Galápagos, he might not have needed all those years to work out his theory of evolution,” says University of Hawai‘i ecologist Jonathan Price, referring to the striking match between native blossoms and beaks.

Tragically, two centuries of land development and a deluge of introduced animals—from disease-carrying mosquitoes to landscape-ravaging livestock—have wrought an ecological holocaust. Though the state of Hawai‘i represents just 0.2 percent of the U.S. land area, it accounts for around

75 percent of the nation’s plant and bird extinctions. Currently, more than 400  Hawaiian plant and animal species are listed as threatened or endangered by the U.S. Fish and Wildlife Service—nearly all found in the wild only on this small island chain.

At least half of Hawai‘i’s native birds (71 species) have become extinct since the arrival of Europeans, and half of all survivors are endangered, the ‘akeke‘e (Kaua‘i ‘ākepa) and ‘akikiki (Kaua‘i creeper) being the most recently listed. One of the greatest threats is the rapid spread of nonnative diseases such as bird pox and avian malaria, carried by nonnative mosquitoes that breed in the mud wallows created by nonnative pigs and in the hollowed-out trunks of tree ferns, which are knocked down and eaten by the pigs.

“So many bird pollinators, including the ‘i‘iwi, have largely disappeared from lower elevations,” says Marjorie Ziegler, executive director of the Conservation Council for Hawai‘i. “Upper-elevation forests at Hakalau—currently too cool for breeding mosquitoes—are essential to the survival of native forest birds.” Yet as climate change drives temperatures up, she adds, mosquitoes likewise are expanding their range into higher elevations.

For many of Hawai‘i’s most spectacular plants and birds, hopes of recovery hinge on re-establishing age-old ecological partnerships such as that between the ‘i‘iwi and native lobeliads. But some of these symbiotic relationships are known or inferred only from historical records. Recently, Price and his students at the University of Hawai‘i began harnessing technology to clarify some of these ancient relationships.

“We’ve photographed the rarest of our flowers and scanned in images of possible pollinators,” he says. The team recently made its first positive match. It involved Kokia drynariodes, a tree of which there is just a handful of individuals in the wild (on the island of Hawai‘i). Though most closely related to cotton, the tree sports giant red blossoms that resemble oversized hibiscus flowers.

“We knew it must have catered to a very long-billed pollinator,” Price says. And in fact, overlaying images on a computer revealed a hand-in-glove match with the kioea, a giant honeyeater and the largest of Hawai‘i’s bird pollinators. “It was almost magical,” Price says of the overlay of bill and blossom. “Like we were seeing this interaction emerge from the mists of time.” For tragically, the kioea is known only from museum specimens, having gone extinct in the mid-1800s.

The search continues for matches between surviving Hawaiian birds and the rare plants they may have forgotten. The information could be used to guide replanting efforts like those at Hakalau. At present, the ‘i‘iwi is looking like the lynchpin for a number of endangered flowering trees, Price says. “The dilemma is that we don’t have large populations of ‘i‘iwi outside places like Hakalau.”

Already, such grim realities have inspired some of the world’s most audacious conservation measures: Field botanists such as Kenneth Wood of Hawai‘i’s National Tropical Botanical Garden are renowned for rappelling down vertical cliffs to use pipe cleaners to hand-pollinate endangered plants clinging to existence out of the reach of feral goats, pigs and cattle.

At Hakalau in fall 2010, Jeffrey was leading a group of college students to his favorite patch of C. lindseyana, telling the story of how the middle schoolers had looked over his shoulder to witness the plant’s historic reunion with the ‘i‘iwi. Soon after, ‘i‘iwi also rediscovered the other two endangered lobeliad species planted by refuge staff.

“I was relating how exciting it had been to see the pollination,” Jeffrey recalls, “but that I was sad to be retiring soon without seeing the seed dispersed by the ‘ōma‘o to complete the cycle.” A whirr of wings interrupted Jeffrey’s lament. Looking up, he and the students saw a plump brown bird launch itself out of the bushes. Yes, an ‘ōma‘o.

“I’m thinking, ‘Can this really be happening?’” Jeffrey recalls. He rushed into the grove that the bird had just exited and examined the lobeliad’s small, round, green-yellow fruits. Several bore the ‘ōma‘o’s distinctive triangular bill marks, exposing the bright orange seed pulp inside. “It was true!” Jeffrey says. “We had shown that ‘if you plant it, they will come!’”

An NWF affiliate since 1972, the Conservation Council for Hawai‘i (CCH) is one of the largest and most effective wildlife conservation organizations in the state. The group’s successes include: raising awareness and support for the critically endangered ‘īlioholoikauaua (Hawaiian monk seal), partnering with the Endangered Species Coalition to produce the report It’s Getting Hot Out There and nominating the Hawaiian Islands as an ecosystem at immediate risk from climate change. Each year, CCH produces and distributes environmental education posters to 450 public and private schools. In 2011, the coalition helped win protection for the threatened ‘a‘o (Newell’s shearwater) and endangered ‘ua‘u (Hawaiian petrel) on Kaua‘i and helped secure federal funding for lead paint removal at Midway Atoll to protect mōlī (Laysan albatross) chicks and for fence replacement (to keep out nonnative ungulates) in endangered palila critical habitat on Mauna Kea. CCH Executive Director Marjorie Ziegler was recently honored with the Hawai‘i Conservation Alliance’s 2011 Outstanding Leadership Award.