Conservationists, ranchers and tribal allies are fighting to stop a mine that would rip more than 1.3 billion tons of coal from nearly pristine Montana prairies 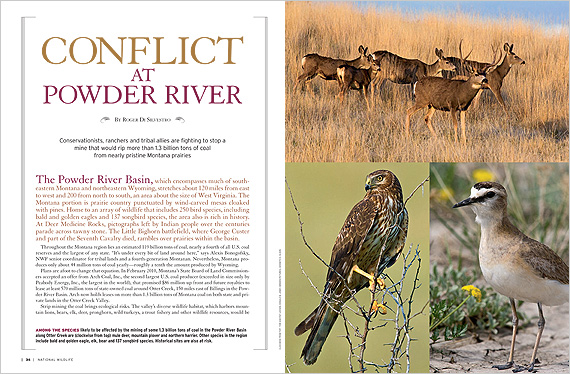 THE POWDER RIVER BASIN, which encompasses much of southeastern Montana and northeastern Wyoming, stretches about 120 miles from east to west and 200 from north to south, an area about the size of West Virginia. The Montana portion is prairie country punctuated by wind-carved mesas cloaked with pines. Home to an array of wildlife that includes 250 bird species, including bald and golden eagles and 137 songbird species, the area also is rich in history. At Deer Medicine Rocks, pictographs left by Indian people over the centuries parade across tawny stone. The Little Bighorn battlefield, where George Custer and part of the Seventh Cavalry died, rambles over prairies within the basin.

Throughout the Montana region lies an estimated 119 billion tons of coal, nearly a fourth of all U.S. coal reserves and the largest of any state. “It’s under every bit of land around here,” says Alexis Bonogofsky, NWF senior coordinator for tribal lands and a fourth-generation Montanan. Nevertheless, Montana produces only about 44 million tons of coal yearly—roughly a tenth the amount produced by Wyoming.

Plans are afoot to change that equation. In February 2010, Montana’s State Board of Land Commissioners accepted an offer from Arch Coal, Inc., the second largest U.S. coal producer (exceeded in size only by Peabody Energy, Inc., the largest in the world), that promised $86 million up front and future royalties to lease at least 570 million tons of state-owned coal around Otter Creek, 150 miles east of Billings in the Powder River Basin. Arch now holds leases on more than 1.3 billion tons of Montana coal on both state and private lands in the Otter Creek Valley.

Strip mining the coal brings ecological risks. The valley’s diverse wildlife habitat, which harbors mountain lions, bears, elk, deer, pronghorn, wild turkeys, a trout fishery and other wildlife resources, would be fragmented by roads, pipelines and power lines serving the mine, which also would strip away perhaps 18,000 acres of prairie. “Compared with the Wyoming portion of the basin, the Montana area has stayed fairly pristine,” Bonogofsky says, “but now we have a rush by coal companies and state and federal governments to lease the rights to the coal, some of which may be exported to Asia.”

NWF and other conservation groups and individuals oppose the lease. Their concerns center on how mining and burning of Otter Creek coal will affect surrounding areas and exacerbate climate change. When mines are dug, they alter underground aquifers, a vital concern in southeastern Montana, which receives less than 15 inches of rain yearly. “Everything sustainable for people, like ranching, is dependent on the groundwater, and coal development takes the water,” local rancher Nick Golder says. Mining also can affect wildlife by causing streams to shrink. Golder says one spring on his land has lost half its volume since mining began in his area north of the Otter Creek site.

Arch presently has no way to transport coal out of the Otter Creek region. Moving the coal would require a new rail line that would appropriate nearly 2,700 acres of right-of-way across the property of 55 private landowners strung out along a 130-mile route. Rancher Mark Fix told a reporter for the Missoula Independent that the railroad would form a wall across his land, some 9,700 acres along the Tongue River. “I’ll have to figure out how to move cattle back and forth across it.”

Otter Creek flows into the Tongue River, the eastern boundary of the Northern Cheyenne reservation. Consequently, the Cheyenne have concerns about the effects that the strip mine would have on water quality and other resources. Steve Brady, chairman of the Northern Cheyenne Cultural Commission, also worries about damage to historical and archaeological sites. Congress is creating safeguards designed to protect Cheyenne cultural areas from mining, he says, and is expected to fund studies of local historic sites. His commission will look, too, at potential effects of the mine on plants used traditionally by the Cheyenne. “We can’t jeopardize what our ancestors left us and what we’re supposed to leave for the next generation,” says Phillip Whiteman, Jr., a Cheyenne spiritual leader. 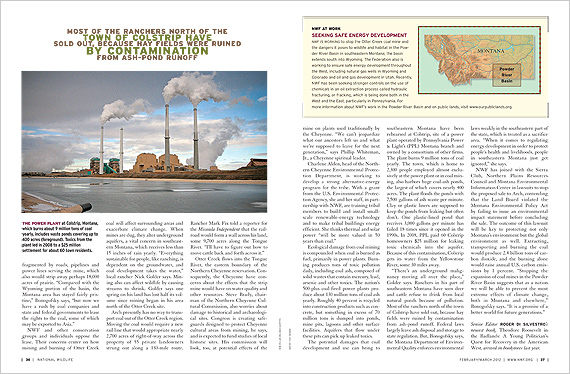 Charlene Alden, head of the Northern Cheyenne Environmental Protection Department, is working to develop a strong alternative-energy program for the tribe. With a grant from the U.S. Environmental Protection Agency, she and her staff, in partnership with NWF, are training tribal members to build and install small-scale renewable-energy technology and to make tribal buildings energy efficient. She thinks thermal and solar power “will be more valued in 50 years than coal.”

Ecological damage from coal mining is compounded when coal is burned as fuel, primarily in power plants. Burning produces tons of toxic pollution daily, including coal ash, composed of solid wastes that contain mercury, lead, arsenic and other toxics. The nation’s 500-plus coal-fired power plants produce about 130 million tons of coal ash yearly. Roughly 40 percent is recycled into construction products such as concrete, but something in excess of 70 million tons is dumped into ponds, mine pits, lagoons and other surface facilities. Aquifers that flow under these pits can pick up leaked toxics.

The potential damages that coal development and use can bring to southeastern Montana have been rehearsed at Colstrip, site of a power plant operated by Pennsylvania Power & Light’s (PPL) Montana branch and owned by a consortium of other firms. The plant burns 9 million tons of coal yearly. The town, which is home to 2,300 people employed almost exclusively at the power plant or in coal mining, also harbors huge coal-ash ponds, the largest of which covers nearly 400 acres. The plant floods the ponds with 7,500 gallons of ash waste per minute. Clay or plastic liners are supposed to keep the ponds from leaking but often don’t. One plastic-lined pond that receives 3,000 gallons per minute has failed 18 times since it opened in the 1990s. In 2008, PPL paid 60 Colstrip homeowners $25 million for leaking toxic chemicals into the aquifer. Because of this contamination, Colstrip gets its water from the Yellowstone River, some 30 miles away.

“There’s an underground malignancy moving all over the place,” Golder says. Ranchers in his part of southeastern Montana have seen deer and cattle refuse to drink from local natural ponds because of pollution. Most of the ranchers north of the town of Colstrip have sold out, because hay fields were ruined by contamination from ash-pond runoff. Federal laws largely leave ash disposal and storage to state regulation. But, Bonogofsky says, the Montana Department of Environmental Quality enforces environmental laws weakly in the southeastern part of the state, which is treated as a sacrifice area. “When it comes to regulating energy development in order to protect people's health and livelihoods, people in southeastern Montana just get ignored,” she says.

NWF has joined with the Sierra Club, Northern Plains Resources Council and Montana Environmental Information Center in lawsuits to stop the proposed sale to Arch, contending that the Land Board violated the Montana Environmental Policy Act by failing to issue an environmental impact statement before concluding the sale. The outcome of this lawsuit will be key to protecting not only Montana’s environment but the global environment as well. Extracting, transporting and burning the coal would produce 2.4 billion tons of carbon dioxide, and the burning alone would raise annual U.S. carbon emissions by 1 percent. “Stopping the expansion of coal mines in the Powder River Basin suggests that as a nation we will be able to prevent the most extreme effects of climate change, both in Montana and elsewhere,” Bonogofsky says. “It is a promise of a better world for future generations.”

NWF is working to stop the Otter Creek coal mine and the dangers it poses to wildlife and habitat in the Powder River Basin in southeastern Montana; the basin extends south into Wyoming. The Federation also is working to ensure safe energy development throughout the West, including natural gas wells in Wyoming and Colorado and oil and gas development in Utah. Recently, NWF has been seeking stronger controls on the use of chemicals in an oil extraction process called hydraulic fracturing, or fracking, which is being done both in the West and the East, particularly in Pennsylvania. For more information about NWF’s work in the Powder River Basin and on public lands, visit www.ourpubliclands.org.