Are industrial pollutants and farm chemicals interfering with the ability of bees to find food? 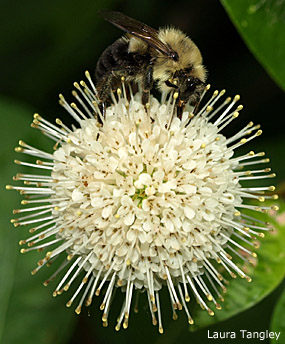 LIKE KIDS LURED TO THE KITCHEN by fresh-baked cookies, bees will be following their noses to nectar-laden blooms this spring. Modern air pollutants, however, may work like room deodorizers, wiping out the odor trails and leaving the insects to follow dead-end paths.

That’s one of the hypotheses under investigation by Pennsylvania scientists, who are researching the problem from two different perspectives: Muhlenberg College neuroethologist Jordanna Sprayberry is studying whether the sharp smell of agricultural chemicals baffles hungry bees, and Pennsylvania State University meteorologist Jose Fuentes is examining the impacts of airborne industrial pollutants on the insects.

“I’d heard stories of farms in California where bees brought in to pollinate a crop would end up five or six miles away,” Sprayberry says. “And a colleague working on what we call colony-collapse disorder in honeybees mentioned that beekeepers found that almond orchards recently treated with fungicide were aversive to bees.” Experts know that certain pesticides can kill bees outright, but Sprayberry wondered whether farm chemicals can harm bees simply by changing the insects’ behavior.

To test whether certain smells interfere with a bee’s ability to find food, Sprayberry’s lab team conducted a behavioral experiment by training bumblebees to locate a sugar-water feeder inside a four-chambered maze. The lure was linalool, an alcohollike compound found in many flowers. Then the researchers masked that sweet smell with an “agriculturally relevant” quantity of either fertilizer or fungicide.

The results? “The fertilizer had no impact,” Sprayberry says. Bees found the feeders just fine. But when the aroma of fungicide filled the air, bees sniffed their way to the food source much more slowly. The next step is field studies. “I’m monitoring novel patches of flowers—some containing agricultural chemicals, some not—to see whether wild bees find them, or if it takes longer for bees to find chemical patches,” she says.

While Sprayberry specializes in insect behavior, Fuentes is an atmospheric scientist who studies the movement of volatile chemicals that trees release into the air. So why investigate bees?

“A few years back while I was teaching at the University of Virginia, an entomology grad student signed up for one of my classes,” Fuentes says. That student, Quinn McFrederick, was studying the ecology of bees. “Meanwhile, I had just read a report saying that air pollution in rural America is increasing.” Comparing notes, the pair decided to investigate how far the smell of a flower travels in clean air as opposed to polluted air.

Plugging in data from other studies to build a mathematical model, the researchers concluded that typical flower smells might have traveled three-quarters of a mile in preindustrial United States. The same floral scent, wafting out into 21st-century air polluted by ozone and other industrial gases, would likely combine with the pollutants. As a result, the researchers estimate that the original smell probably would persist for only a quarter-mile—just one-third as far.

With support from the National Science Foundation, Fuentes is now testing this model with real-world measurements. His first step is to measure exactly how much scent certain flowers give off. He is focusing on alfalfa and canola—two major bee-pollinated crop plants.

His second step is to figure out what happens after a molecule of floral scent collides with a molecule of a pollutant such as ozone. “We know that the two molecules can combine, making a different molecule,” Fuentes says. “So the original scent is gone. But this new molecule—it still has some of the same characteristics. Do the bees recognize that? We don’t know yet.”

These studies have broad implications. “Honeybees worldwide are in trouble, declining because of colony-collapse disorder,” Fuentes says. Despite years of study, scientists still do not know exactly what causes entire hives of bees to die, though they think the problem could be a combination of stresses, including pesticides and parasites.

“Perhaps part of the problem is simply that the insects are having a harder time finding food,” Fuentes says. More research may help lead to some scent-sible solutions.

Pennsylvania journalist Cynthia Berger is a frequent contributor to this magazine.

Through its Certified Wildlife Habitat® program, NWF encourages homeowners to create habitats suitable for bees, birds, butterflies and other pollinators, and it educates gardeners about appropriate host plants to cultivate and the risks of using pesticides.