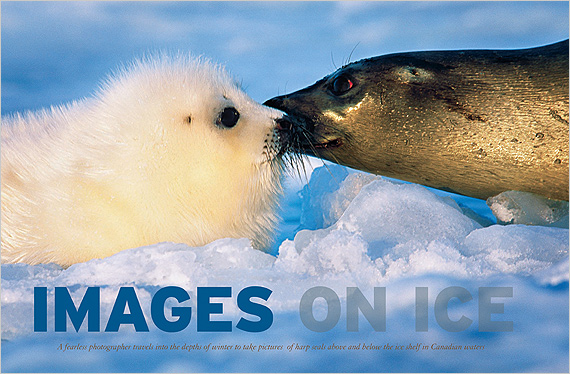 LOOKING UP FROM 30 FEET UNDERWATER, I saw the ice above as a mountainous terrain of peaks and valleys stretching as far as I could see. The frigid sea was a crystal realm of emerald green glowing with diffused sunlight. My quarry this morning in early March were the harp seals swimming by, sometimes speeding like torpedoes and other times moving slowly like bumblebees in flight. I had entered their submarine world through a crack in the ice, called a lead, and hoped to exit in the same spot. Two assistants worked with me: Sean on the surface with additional camera gear and Mario in the water, tasked with keeping both me and our exit hole in sight—a tough job as the frozen ceiling constantly changed, causing leads to come and go.

I was in Canada’s Gulf of St. Lawrence working off the Îles de la Madeleine, or Magdalen Islands. Ultimately, I would spend a total of eight weeks during February and March working both above and below the ice photographing harp seals during a critical period in their annual cycle: when the animals have migrated thousands of miles from the Arctic to the gulf to engage in courtship and mating. Females, pregnant from the previous year, also give birth to their pups on sea ice here.

Called harp seals because of a lyre-shaped pattern on the backs of adults, these pinnipeds are true polar animals, ranging most of the year across Arctic and sub-Arctic waters of the North Atlantic Ocean. The species’ scientific name, Pagophilus groenlandicus, means ice lover from Greenland, and the seals are well suited to their frozen habitat. Harp seal pups, for example, double to triple their weight during a 12-day weaning period—the second-shortest (after hooded seals) of any animal. More than half their final weight of about 70 pounds is made up of thick, insulating blubber. 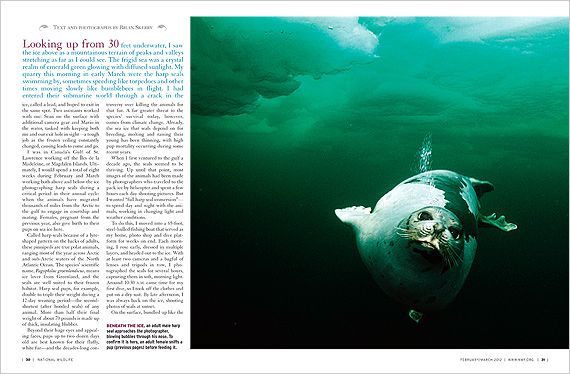 Beyond their huge eyes and appealing faces, pups up to two dozen days old are best known for their fluffy, white fur—and the decades-long controversy over killing the animals for that fur. A far greater threat to the species’ survival today, however, comes from climate change. Already, the sea ice that seals depend on for breeding, molting and raising their young has been thinning, with high pup mortality occurring during some recent years.

When I first ventured to the gulf a decade ago, the seals seemed to be thriving. Up until that point, most images of the animals had been made by photographers who traveled to the pack ice by helicopter and spent a few hours each day shooting pictures. But I wanted “full harp seal immersion”—to spend day and night with the animals, working in changing light and weather conditions.

To do this, I moved into a 65-foot, steel-hulled fishing boat that served as my home, photo shop and dive platform for weeks on end. Each morning, I rose early, dressed in multiple layers, and headed out to the ice. With at least two cameras and a bagful of lenses and tripods in tow, I photographed the seals for several hours, capturing them in soft, morning light. Around 10:30 a.m. came time for my first dive, so I took off the clothes and put on a dry suit. By late afternoon, I was always back on the ice, shooting photos of seals at sunset.

On the surface, bundled up like the Michelin Man, I would lie on the ice for hours in temperatures that could dip to minus 20 degrees F and winds that could top 70 miles per hour. I wore ski goggles to shield my eyes from wind and snow but, despite great boots, most days I never felt my toes. My hands would ache and go numb while holding the camera’s cable release, waiting for the moment a mother popped up in a breathing hole to check on her pup.

Underwater, the challenges were different. On some dives, I spent three hours in water 29 degrees F, making a few frames, but mostly just waiting. Indeed, during the 35 years I’ve spent exploring and photographing the world’s oceans, the time with harp seals remains one of my most difficult, yet most rewarding, experiences. After two months in the field, I’d captured only a handful of good underwater images. 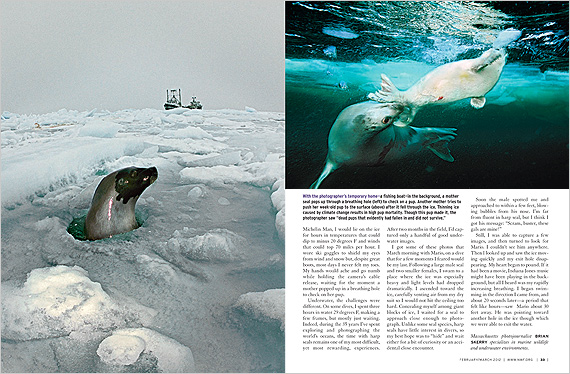 I got some of these photos that March morning with Mario, on a dive that for a few moments I feared would be my last. Following a large male seal and two smaller females, I swam to a place where the ice was especially heavy and light levels had dropped dramatically. I ascended toward the ice, carefully venting air from my dry suit so I would not hit the ceiling too hard. Concealing myself among giant blocks of ice, I waited for a seal to approach close enough to photograph. Unlike some seal species, harp seals have little interest in divers, so my best hope was to “hide” and wait either for a bit of curiosity or an accidental close encounter.

Soon the male spotted me and approached to within a few feet, blowing bubbles from his nose. I’m far from fluent in harp seal, but I think I got his message: “Scram, buster, these gals are mine!”

Still, I was able to capture a few images, and then turned to look for Mario. I couldn’t see him anywhere. Then I looked up and saw the ice moving quickly and my exit hole disappearing. My heart began to pound. If it had been a movie, Indiana Jones music might have been playing in the background, but all I heard was my rapidly increasing breathing. I began swimming in the direction I came from, and about 20 seconds later—a period that felt like hours—saw  Mario about 30 feet away. He was pointing toward another hole in the ice though which we were able to exit the water.