Conservation's Eye in the Sky 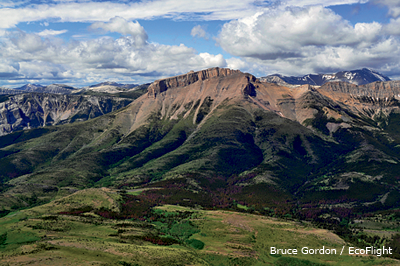 SIX YEARS AGO, CHRISTOPHER BOYER left a career in watershed restoration after becoming alarmed by the loss of western lands to suburban sprawl, mining and oil and gas development. These days he’s flying a 1957 Cessna with removable doors and a camera mounted to its underside so he can take photos from the cockpit. He is among a growing cadre of photographers who take to the air to save threatened habitats across North America. “Aerial images have tremendous power to educate people about important issues affecting the landscape,” says Boyer, founder of Kestrel Aerial Services, Inc. The photos “provide a sense of scale and give context to an issue.”

Boyer’s calling is an increasingly important tool for conservationists. NWF Senior Policy Advisor Kate Zimmerman witnessed the emotional power of aerial photographs in 2009 while speaking to a group of Federation affiliates about natural gas drilling in Wyoming’s Jonah Field. “An audible gasp went through the room,” Zimmerman says, as she showed images of the field, where drillers have turned a once-majestic expanse of high-desert sage into an industrial landscape of wells, roads and pipelines. Many participants subsequently joined Sportsmen for Responsible Energy Development, a coalition that in 2010 helped persuade the federal government to reform its onshore oil and gas program.

“It’s all about perspective, and the best way to provide perspective is from the window of a small airplane,” says Bev Gabe, spokeswoman for LightHawk, the nation’s largest environmental aviation nonprofit whose volunteer pilots work closely with about 250 conservation groups a year. In Florida, for example, LightHawk is collaborating with the International League of Conservation Photographers to create the Florida Wildlife Corridor, a project to connect and protect remaining natural lands, waters, farms and ranches from the Everglades to Georgia to benefit wildlife and watersheds.

Aerial photos have played a role in several conservation successes, including efforts to stave off fossil fuel extraction in the Hoback area of the Wyoming Range, Colorado’s Vermillion Basin and British Columbia’s Flathead River bordering Glacier National Park. In 2004, photos of Montana’s largely unspoiled Rocky Mountain Front taken from the air helped galvanize opposition to oil drilling there. “We showed images of this largely roadless area to sportsmen, hunters and fishermen, and contrasted these with pictures of what it would look like if drilling occurred,” says pilot Bruce Gordon, founder of Colorado-based EcoFlight.

Aerial images also can be a tool for policing industrial pollution. Photographers took to the air in 2008 when gas drillers sent sludge cascading down a scenic cliff on Colorado’s Roan Plateau. Gas companies have drilled much of the Roan’s base and portions of its plateau, and conservationists are now trying to protect 55,000 acres atop the formation. By juxtaposing photos of intensely drilled areas with untouched areas, Zimmerman says, “we have been very successful in telling the story of what’s at stake.”