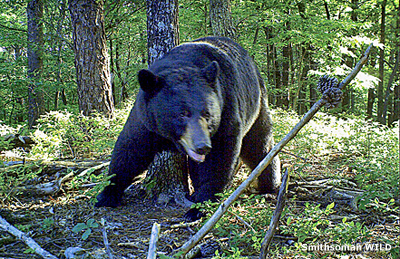 NATIONAL ZOO ECOLOGIST WILLIAM MCSHEA was studying black bears and goatlike takin with scientists in China in 1998 when he first had the idea to pair camera traps with volunteers to survey large landscapes. The researchers were trying to determine from droppings which animals lived in panda reserves.

“Somebody would say, ‘This is from this animal,’ another would say ‘No, it is from that animal.’ Then there’s always somebody that says, ‘This is a male, 2 years of age and walking with a slight limp.’ Meanwhile, I’m saying, ‘There has to be a better way to identify these animals.’ Then these cameras came along, and they were just a godsend.” 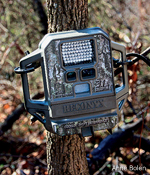 Movement and a change in temperature trigger the sensors in infrared cameras, “trapping” images of animals as they walk by. Some remote-control cameras can take multiple photos in sequence or even video. Their portability, ease of operation and low cost are making camera traps one of the most-used noninvasive tools in conservation. They have recorded behaviors of elusive and rare species, such as snow leopards in the Himalayas in 2011, and resurrected animals thought extirpated or extinct, such as the mongooselike servaline genet, photographed for the first time in Tanzania in 2002. Now scientists are turning to these cameras to answer broader research questions, including what is the size of a species’ population, how do animals interact and how have habitats changed.

From his office at the Smithsonian Conservation Biology Institute in Front Royal, Virginia, McShea has collected more than a million camera-trap photos from scientists’ projects around the world. The Smithsonian WILD website he manages features more than 200,000 photographs of animals in Asia, Kenya, Panama, Peru, New York’s Adirondacks and, the location of his last project, the Appalachian Mountains.

The Appalachian Forests and Trail

Appalachian forests stretch from Newfoundland to Alabama and are home to a vast diversity of animals, including black bears, bobcats, lynx, moose, flying squirrels, fishers, martins, porcupines, spotted skunks, hawks and saw-whet owls. The Appalachian Trail (AT) is a nearly 2,200-mile corridor that runs from Maine to Georgia through these mountains, connecting patches of protected wildlife habitat that are interrupted by or adjacent to agricultural, residential and industrial areas.

McShea and Peter Erb, a University of Colorado ecology graduate student, wanted to look at how human activities such as development, hunting and hiking affect mammals along the AT. “Being able to study such systems and ask these questions at this large scale hadn’t really been done before,” Erb says. 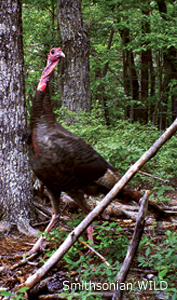 The Benefits of an Army of Citizen Scientists

Camera traps monitored by a troop of volunteers could provide greater amounts of objective data and cover a larger survey area than could any one team of scientists. In China, McShea developed protocols to standardize how citizen scientists set up camera traps and record the time and location of their photos. Capitalizing on the estimated 2 to 3 million people who use the AT every year, McShea approached Laura Belleville, director of conservation at the Appalachian Trail Conservancy, to help him recruit 50 volunteers from hiking and nature clubs with access to the trail. Between 2007 and 2009, from May through November (when animals are most active), they monitored cameras at 447 sites along 636 trail miles stretching from southern Pennsylvania into Tennessee.

Belleville and her 7-year-old daughter took on monitoring part of the trail in Virginia’s Jefferson National Forest. One day, she showed her daughter’s classmates how the cameras worked and what surprising images they captured. “It is like opening up your own little treasure box,” she says. 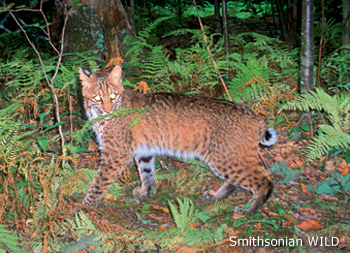 But being a camera-trap monitor is not for the faint of heart—or stomach. The volunteers were trained to read a map and use a global positioning system (GPS) to place the cameras. Then they had to load fresh batteries and a data chip, attach the camera to a tree, clear its view of brush and make sure it is functioning. The final step was to apply a mixture of ground animal intestine—which former volunteer and President of the Natural Bridge Appalachian Trail Club David Helmes describes as an “evil-smelling liquid”—onto a stick or tree in front of the camera’s sensor to draw critters into view. “It was fun,” says Helmes. “You felt part of a much bigger picture.”

The preliminary analysis of the study provides a snapshot of which human activities and structures might determine where certain mammals prefer to be along the trail. For example, hunting on adjoining lands steers away black bears, bobcats and deer, but seems not to bother opossums. Deer and bears seem to avoid hiking trails, whereas red foxes use them. Coyotes avoid roads, while deer seem attracted to them. Protected forest cover appears to be important habitat for almost all the mammals.

The Next Phase in Camera Trap Evolution

However, the study recorded only the mammals’ presence or absence. McShea and Roland Kays, director of the Biodiversity Laboratory at the North Carolina Museum of Natural Sciences, are developing a way to estimate the density of common mammals. The team plans to test this technique during a three-year study in the Appalachians in Virginia and North Carolina beginning this summer. This information could be valuable to wildlife managers, says McShea. “If you asked me how many skunks are in this area, I couldn’t tell you. How can we manage these areas for all animals if we don’t know if their ranges or populations are increasing or decreasing?” 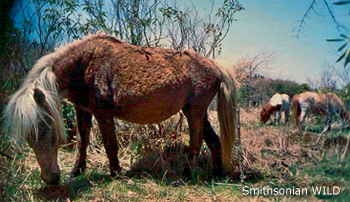 McShea hopes the camera trap protocols he has created will help citizen scientists contribute valid, sharable data. “With their help,” he says, “We can track a lot more animal populations.” McShea, Kays and National Museum of Natural History National Outreach Program Manager Robert Costello are working to grow Smithsonian WILD into eMammal, a searchable online archive of camera-trap photos to which scientists and citizen scientists can contribute.

In this way, camera traps could be one of the few technologies to, as Costello says, “Get people into the woods while completing an important task. And they’ll have that ‘Oh, wow’ moment when they open that camera and discover what it holds.”

As part of its Keep the Wild Alive strategy, NWF initiated a campaign to protect and restore priority Appalachian habitats imperiled by threats such as unsustainable forestry and energy development practices, sprawl and climate change.

“We have a bold vision: A mosaic of connected forests and waters that are home to thriving native wildlife populations in the Appalachian Mountains and nearby lands,” says NWF Northeastern Regional Center Senior Manager George Gay. Millions of people can easily access the Appalachians, and the region has globally significant pockets of biodiversity. “This is America’s first backyard,” Gay says. “We will roll out a palette of activities to inspire and engage citizens to help create a sustainable wildlife corridor stretching from Alabama to Maine.”

National Wildlife Managing Editor Anne Bolen enjoys hiking the AT. To view even more camera trap photos and learn about Smithsonian WILD as well as how to volunteer for upcoming camera trap projects, go to siwild.si.edu.