Winging It With Ospreys 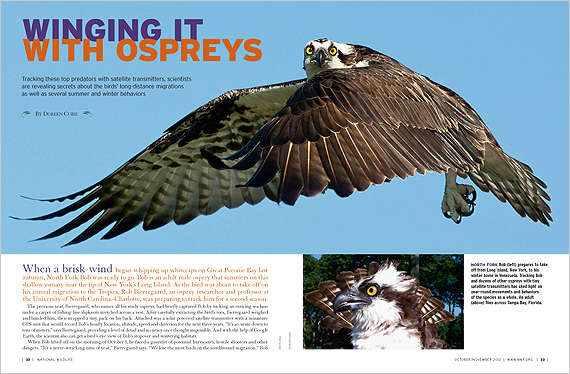 WHEN A BRISK WIND BEGAN whipping up whitecaps on Great Peconic Bay last autumn, North Fork Bob was ready to go. Bob is an adult male osprey that summers on this shallow estuary near the tip of New York’s Long Island. As the bird was about to take off on his annual migration to the Tropics, Rob Bierregaard, an osprey researcher and professor at the University of North Carolina–Charlotte, was preparing to track him for a second season.

The previous year, Bierregaard, who names all his study ospreys, had briefly captured Bob by tucking an enticing sea bass under a carpet of fishing-line slipknots stretched across a nest. After carefully extracting the bird’s toes, Bierregaard weighed and banded him, then strapped a tiny pack on his back. Attached was a solar-powered satellite transmitter with a miniature GPS unit that would record Bob’s hourly location, altitude, speed and direction for the next three years. “It’s accurate down to tens of meters,” says Bierregaard, providing a level of detail and accuracy once thought impossible. And with the help of Google Earth, the scientist also can get a bird’s-eye view of Bob’s stopover and wintering habitats.

When Bob lifted off on the morning of October 3, he faced a gauntlet of potential hurricanes, hostile shooters and other dangers. “It’s a nerve-wracking time of year,” Bierregaard says. “We lose the most birds on the southbound migration.” Bob began his perilous journey by island-hopping down the Atlantic coast. He flew the length of the Florida Keys and crossed to Cuba, where he flirted with catastrophe by hanging out for a week just upstream from a fish farm. Ospreys are often shot at these facilities once they leave the United States, says Bierregaard, but Bob dodged the bullet, “figuratively if not literally.” From there, it was on to Haiti, then a 25-hour nonstop flight over the Caribbean to landfall in Colombia. By late November, Bob had reached the exact spot where he had wintered the previous year: along a shallow river in the highlands of southern Venezuela.

The travels of North Fork Bob and other ospreys fitted with Bierregaard’s transmitters are not only unlocking the secrets of their migrations, they also are revealing information on their winter behavior. For one thing, Bierregaard has found that adults don’t stray very far once they arrive at their southern home. “Bob’s barely moved the entire winter, not more than a mile and a half,” Bierregaard says. “He’s been a total couch potato.”

The sophisticated transmitters, which Bierregaard and his colleagues have placed on 34 ospreys in Delaware, Massachusetts, New Hampshire, New York, Rhode Island and South Carolina, also allow researchers to study the foraging ecology of ospreys on their breeding grounds. Biologists can discover exactly where the birds fish and where the threats to ospreys—and their ecosystems—might lie. “They are a sentinel species,” Bierregaard says, “the canary in the coal mine, so to speak.” If anything goes amiss in the waters where these top predators dive for flounder, menhaden and other fish, it will show up in the adults, their eggs or their young.

This happened, famously, about a half century ago. By the 1960s, the pesticide DDT—first used in the late 1940s—had accumulated in the tissues of ospreys and other birds. As a result, females laid eggs with shells much thinner than normal. In extreme cases, eggs broke under the weight of incubating adults. Hatching success even in eggs that did not break was very low.

Between New York and Boston, where the salt marshes were sprayed with DDT for mosquito control, ospreys nearly disappeared. “The coastal birds were essentially mainlining DDT,” says Alan Poole, a senior research associate at the Cornell Lab of Ornithology and author of the book Ospreys: A Natural and Unnatural History. “They couldn’t reproduce for many years.” Elsewhere in the country, says Poole, osprey numbers also sharply declined, but not as much as in New England. 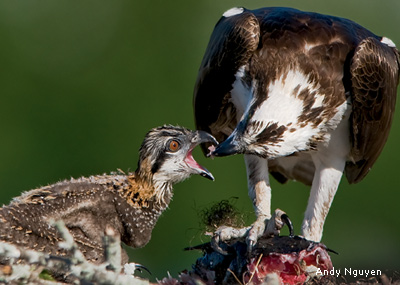 In 1972, DDT was banned in the United States, and ospreys gradually began to recover. Today, although scientists still monitor them for traces of mercury or other industrial pollutants, the birds are back in a big way. A rough 2001 estimate by Bierregaard put the population in the Lower 48 at just below 20,000 pairs.

“There may be more ospreys nesting in North America now than ever before,” says Charles Henny, a research zoologist emeritus with the U.S. Geological Survey in Corvallis, Oregon, who has studied the species for 40 years. “It’s really a success story.” Ospreys succeeded in part because they have readily forsaken trees to build their 250-pound nests on power poles, cell phone towers, channel markers and other human-made structures. And unlike most raptors, ospreys are tolerant of people, even raising their young next to busy highways or marinas.

Today large concentrations of breeding ospreys are found in the Pacific Northwest, the Great Lakes, New England, the Chesapeake Bay region and elsewhere along the Atlantic coast as far south as Florida. They also nest in sizable numbers in reservoirs scattered across western states. Ospreys nest in all but four of the Lower 48 states. In good years, when fish are abundant, adults usually fledge one or two offspring.

Where they hatched determines where these immature birds fly south on their first fall migration. Henny and other researchers have learned that ospreys from western states—both young and adults—head to Mexico or Central America. Midwestern birds winter from Mexico to Bolivia. Virtually all of the eastern population migrates to the Caribbean or South America. And Bierregaard has discovered that juveniles, which travel alone and not with their parents, take very different routes to get there.

“Adults hug the coast and stay over land as much as possible,” he says. Inexperienced birds, on the other hand, sometimes launch themselves out over the Atlantic on epic journeys. For example, Moffett, an immature male, flew nonstop for 66 hours after leaving Martha’s Vineyard. He crossed more than 1,500 miles of ocean before finally landing in eastern Cuba.

Bierregaard also has learned that some young ospreys have minds of their own. Not long after fledging, a female named Meadow left Massachusetts and flew to Lake Superior. But once snow began to cover the ground, she decided it was time to hit the road. “Meadow corrected for the fact that she was 800 miles to the west,” says Bierregaard, and unerringly set off for South America. She made it as far as the Dominican Republic and settled down for the winter. Not long after, she was shot at a farm pond. Buck, a juvenile male, flew straight to Colombia on his first migration. But on his way back to his natal home of South Carolina, he took a three-month detour through New England and the mid-Atlantic states. It took him almost four months and about 9,000 miles to find his old neighborhood. 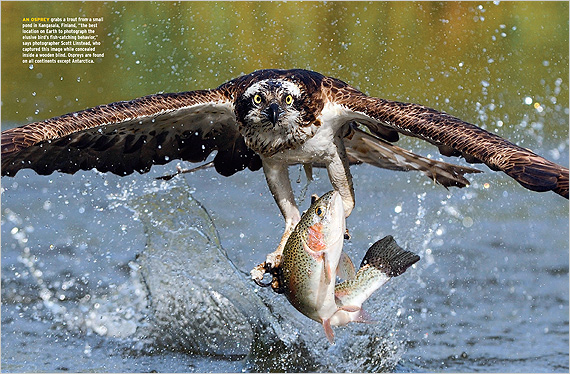 Ospreys do not breed until their third or fourth year and stay in their tropical homes for their first two winters. “We used to think they needed the extra time to find a good territory,” Bierregaard says, “but the birds seem to settle down fairly quickly.” He suggests staying south may be an adaptation that allows them to avoid one migration cycle, a treacherous time for both adults and young.

Adults have about an 80 percent chance of surviving these travels, in large part because they know the drill. When North Fork Bob quit Venezuela this past March, he took the easy way, straight through the islands and up the coast to New York. “He flew so little this winter,” jokes Bierregaard, “we wondered whether he would be in good enough shape to make it back.” But his time as a “couch potato” didn’t bother Bob. He covered the 3,000 miles in 17 days, right back to Long Island and another summer in the sun.

Doreen Cubie is a South Carolina-based journalist and frequent contributor.

Making the Most of Migration
Migratory Marvels
Solving the Mystery of a Migratory Marvel
WILDLIFE PROMISE: Invite an Osprey into Your Family
Create a Bird-Friendly Habitat