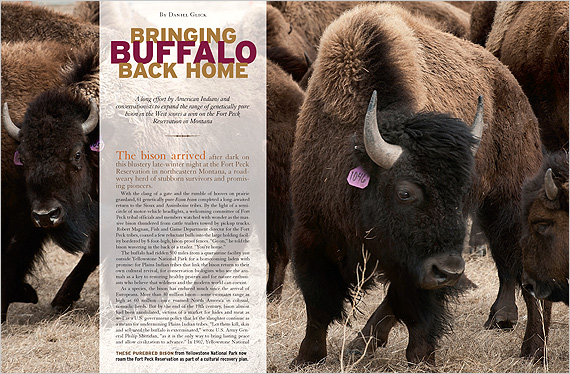 THE BISON ARRIVED AFTER DARK on this blustery late-winter night at the Fort Peck Reservation in northeastern Montana, a road-weary herd of stubborn survivors and promising pioneers.

With the clang of a gate and the rumble of hooves on prairie grassland, 61 genetically pure Bison bison completed a long-awaited return to the Sioux and Assiniboine tribes. By the light of a semi-circle of motor-vehicle headlights, a welcoming committee of Fort Peck tribal officials and members watched with wonder as the massive bison thundered from cattle trailers towed by pickup trucks. Robert Magnan, Fish and Game Department director for the Fort Peck tribes, coaxed a few reluctant bulls into the large holding facility bordered by 8-foot-high, bison-proof fences. “Go on,” he told the bison wavering in the back of a trailer. “You’re home.”

The buffalo had ridden 500 miles from a quarantine facility just outside Yellowstone National Park for a homecoming laden with promise: for Plains Indian tribes that link the bison return to their own cultural revival, for conservation biologists who see the animals as a key to restoring healthy prairies and for nature enthusiasts who believe that wildness and the modern world can coexist.

The Slaughter of a Species

As a species, the bison has endured much since the arrival of Europeans. More than 30 million bison—some estimates range as high as 60 million—once roamed North America in colossal, nomadic herds. But by the end of the 19th century, bison almost had been annihilated, victims of a market for hides and meat as well as a U.S. government policy that let the slaughter continue as a means for undermining Plains Indian tribes. “Let them kill, skin and sell until the buffalo is exterminated,” wrote U.S. Army General Philip Sheridan, “as it is the only way to bring lasting peace and allow civilization to advance.” In 1902, Yellowstone National Park officials counted just 23 remaining genetically pure bison in the park, the last known wild bison south of the Canadian border.

Today, most buffalo on ranches around the West—more than 50 such ranches are located in Montana alone—carry some cattle genes from crossbreeding years ago, when ranchers thought they might create a market for animals they called beefalo, which they joked was another word for “ornery cows.” Fort Peck itself is one of many reservations that owns a “business herd” of genetically mixed bison managed for hunts and meat sales. Even herds in federal ranges such as Wind Cave National Park in South Dakota carry some livestock genes. The genetically pure Yellowstone bison, numbering around 3,000 animals, stand out as a rarity.

The herd’s unique genetics didn’t help in recent years when some bison wandered from the park. Although bison inside Yellowstone were revered as a symbol of the Old West, when they crossed the park boundary Montana agriculture officials labeled them livestock and shot them, ostensibly because some bison carry brucellosis, a disease  that causes cattle to abort fetuses. (Elk, which also carry the disease, did not receive the same treatment, says Garrit Voggesser, NWF’s Tribal Partnerships director, because elk bring the state so much hunting revenue.)

Since 1985, nearly 7,000 bison have been slaughtered as a result of this controversial policy, according to the Buffalo Field Campaign, a Montana-based advocacy group. Conservationists argued that nothing justified the killing, because no case of a cow contracting brucellosis from a bison has ever been documented. Instead of killing the drifting animals, groups such as NWF asked, why not allow tribes to take them? 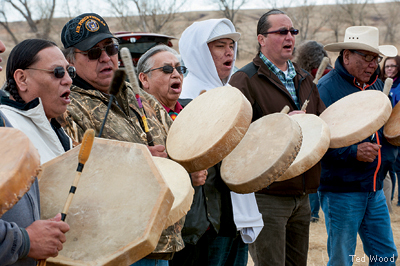 The Bison's Role on the Prairie and in Tribal Culture

The idea made sense on so many levels, says Steve Torbit, a former NWF senior scientist who worked on the bison reintroduction for nearly two decades. From a biological standpoint, having all the remaining genetically pure Yellowstone bison in one park’s basket presented a real danger: An outbreak of disease or a natural disaster could spell the end of the species. Plus, bison once played a key role in prairie ecosystems, grazing and trampling the ground just enough to allow a wealth of other species—little bluestem grass and black-footed ferrets, kestrels and killdeer, wrens and western wheatgrass—to flourish. Wildlife officials’ experience with other species reintroductions in the West—including wolves, lynx, elk, moose and bighorn sheep—confirmed that having a full complement of species made for healthier landscapes.

Torbit and his colleagues knew they were up against stiff opposition from ranchers, whose political power in Montana ensured for years that the state continued to slaughter bison that wandered outside the park. “We knew the only way that we could begin to restore bison to the tribes or anyplace else was if we could develop a process where the livestock industry was assured the bison no longer had brucellosis,” Torbit says.

To accomplish this goal, NWF and the InterTribal Bison Cooperative, which includes 56 tribes from 19 states, in 1997 successfully proposed construction of a quarantine facility where bison could be monitored and tested. Brucellosis-free bison eventually might be transferred to tribal lands. Animals that tested positive could be killed.

Even after bison were certified—a complex process that takes multiple years—finding a tribe to take them proved a challenge. Some tribal ranchers were opposed, and some tribal officials worried about the expense of keeping and monitoring the bison. The state of Montana put up roadblocks between Yellowstone and the tribes. Only after the tribes erected special fences to keep the animals from roaming onto private land and into conflicts with cattle, did the state approve transfer of certified Yellowstone bison to the tribes.

Voggesser hopes that the new arrivals will be true pioneers, serving as seed stock for future genetically pure herds. “The return of wild bison to the tribes opens the door to restoring buffalo to other landscapes across the West,” he says. “Tribes are paving the way.”

However, a plan to share half the new arrivals at Fort Peck with nearby Fort Belknap has been blocked at least temporarily by a recent court decision won by ranchers, who fear that the animals will escape and carry brucellosis to cattle. The court ruling also blocks any other bison relocations within Montana. The Federation is appealing the decision to the state’s Supreme Court. “NWF believes Montana’s prairies provide an ideal home for wild bison,” Voggesser says. “The public is behind the effort to restore wild bison to tribal lands and other large landscapes, and we believe the Montana Supreme Court will validate this effort.”

Both reservations have plans to grow these “cultural herds” of genetically pure bison, with hopes to use any surplus to feed their elders and to educate children about cultural ways. They also want tribal diabetes programs, which seek to diminish a rampant health problem among reservation residents, to have access to the bison meat, which is lower in fat and calories than beef. Other tribes may follow suit.

Larry Wetsit, an Assiniboine religious leader and director of Community Services at Fort Peck Community College, says the return of the bison means revival for him and the tribes. Historically, the bison offered food, clothing, ritual and a sense of connectedness. “The bison’s return represents a renewed celebration of who we are as a people,” he says.

The symbolism runs deep, but won’t be a cure-all for the tribes’ problems. Darrell Youpee, the cultural resource department director for the reservation, says Fort Peck has struggled with everything from high unemployment to a high teen suicide rate. He says that instilling a sense of cultural identity in younger generations has been challenging and cautions that the tribes need to make the most of the returning bisons’ promise. “We can hold a ceremony to welcome our new relatives,” Youpee says, but the next step of revitalizing sun dances and pow-wows and engendering a sense of cultural pride and self-sufficiency lies ahead. 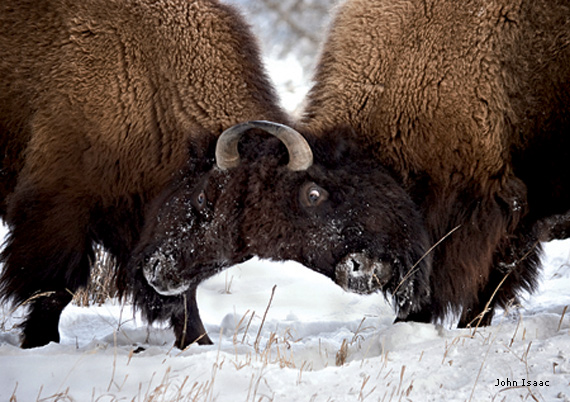 On the Road to Restoration

Two days after the release, on the first day of spring, Brian Schweitzer, Montana’s governor, joined U.S. Department of Interior representatives and tribal officials from Fort Peck and Fort Belknap in a sacred circle outside the bison holding pen. Fort Peck tribal executive board member Thomas Christian smudged the assemblage with sage and passed a ceremonial pipe four times around the circle in a ritual that Christian wryly noted “once was illegal.” Schweitzer acknowledged the deep wound they were tending to that day. “When we took the buffalo from the Indian people, we took part of the soul of the Indian people,” he said.

Fort Peck Tribal Chairman Floyd Azure said that returning this small herd was an important gesture of reparation that he accepts as an opportunity to start building trust again. “The federal government stripped us of everything,” he said. “But we’re still here. It’s a very proud moment.”

Azure also invoked a prophesy that prosperity would return to the tribes when the buffalo did. With a grin, he said the prediction seems to be on the mark at Fort Peck. The tribe recently settled a $75-million lawsuit with the federal government for misappropriation of its trust responsibilities.

During the ceremony, a van of elders arrived at the buffalo enclosure to see the new arrivals. Iris Gray Bull stood by the fence and watched the bison, moved to tears. “By bringing them back, we’re bringing our identity back,” she said.

NWF in Action: New Homes for Buffalo to Roam

Last year, NWF helped win an agreement among federal agencies, several American Indian tribes, five states and local ranchers to allow bison in Yellowstone National Park to migrate into Gardiner Basin, a 75,000-acre area that lies immediately north of the park. The Federation led a three-year campaign to raise $1 million for this agreement. Through its Adopt-a-Wildlife-Acre program, which compensates ranchers for retiring grazing allotments on federal land, NWF has phased out livestock grazing on more than 600,000 acres in key areas around Yellowstone and the 1.1 million-acre Charles M. Russell National Wildlife Refuge, in north-central Montana. In addition, NWF has created a campaign to restore wild, free-ranging bison in and around the Russell wildlife refuge. “Bison remain the one big game species for which significant restoration has not occurred on the Northern Great Plains,” says Tom France, NWF Northern Rockies regional director. “With the continued help of our supporters, we believe we can achieve this goal.”

Daniel Glick is cofounder of The Story Group and author of Monkey Dancing: A Father, Two Kids, and A Journey to the Ends of the Earth.