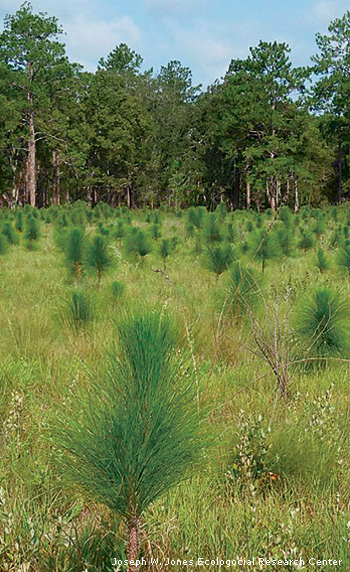 A STROLL THROUGH A LONGLEAF PINE FOREST is a nature lover’s treat. Found only in the southeastern United States, these forests are home to hundreds of different plants and animals, with as many as 50 species of wildflower, grass, shrub and fern in a single square yard of the forest’s open, sun-bathed floor. Some researchers estimate that the longleaf pine ecosystem is one of the most diverse outside of the Tropics.

Before Europeans arrived in North America, longleaf pine forests dominated the coastal plain from eastern Texas to southeastern Virginia, with these trees found across about 90 million acres—an area slightly smaller than the state of Montana. Even though longleaf pines can live more than 300 years, today about 97 percent of these forests are just a memory, having fallen to logging, agriculture, urban development or plantation forestry that relies on faster-maturing species such as loblolly and slash pines. Most of the remnants of longleaf forest, including about 10,000 acres of uncut old-growth, are on public lands scattered throughout the trees’ former range.

But in the past five years, NWF and its state affiliate, the Alabama Wildlife Federation (AWF), in a project funded in part by the National Fish and Wildlife Foundation and Southern Company, have collaborated with landowners in central and southern parts of Alabama to restore long-leaf pine on their land (See “America’s Forgotten Forest,” National Wildlife, April/May 2008). NWF also works with landowners in Georgia, Mississippi and South Carolina to raise awareness of the benefits of these forests. During the first phase of the longleaf restoration project in Alabama, which began in 2007 and ended last year, landowners replanted trees on more than 6,000 acres. “The program was a huge success,” says Amadou Diop, senior manager for NWF’s Forestry Program.

A second phase of the restoration project launched in Alabama in May 2011 and is due to end in May 2014. More than 30 landowners in the state have signed on to plant longleaf pines on more than 2,000 acres—a rate that puts the effort on target to exceed its goal of 5,000 acres for this phase, says Ryan Mitchell, a resource stewardship biologist with AWF, which is helping to implement the restoration program and recruit new landowners.

Three years ago Garrett Carstarphen, a 63-year-old retired aerospace worker, planted longleaf pines on more than 200 acres of his land in Coy, Alabama, which his family previously used to raise soybeans, cotton and corn. He also seeded plants such as bluestem grasses and partridge pea to attract wildlife, including quail, deer and wild turkey. While the ecosystem gets established, he’ll hunt on the land as well as lease the opportunity to hunt there to others.

In a few years, Carstarphen says, he’ll also begin to harvest pine straw that can be sold as mulch. The fallen needles from longleaf pines, which can grow up to 18 inches long, decompose more slowly and hold their color longer than the shorter needles harvested from loblolly pine or other species, so they’re preferred and bring a higher price. In Georgia, where the market for longleaf pine straw is well established, landowners can get about $8 for a 30-pound bale of the straw. “Pine straw will make a nice intermediate source of income,” he notes.

In the long term, Carstarphen and many other landowners who have planted longleaf pine will probably sell it as timber. These trees can grow up to 130 feet and have a larger proportion of long, straight trunks than other southern pine species. Longleaf pine also produces denser, stronger wood—which in turn makes these forests a great source for utility poles or structural beams for log cabins and other buildings.

“A 60-foot-long, 18-to-20-inch-diameter longleaf pole is as strong as steel,” says Glenn Dowling, a 79-year-old, semi-retired podiatrist who first planted longleaf on his property in southwestern Georgia about 15 years ago as part of a separate restoration effort. Those trees are now about 20 feet tall, but because longleaf pines typically take more than 40 years to mature, Dowling and his family are a long way from harvesting timber. “All it’s doing now is growing,” he notes. “It’s not profitable now, but it will be.”

In the meantime, says Dowling, the developing ecosystem is wonderful habitat for a variety of wildlife, including quail, turkey, deer, songbirds and gopher tortoises—the only native tortoise east of the Mississippi River. This tortoise thrives in the open understory of longleaf forests, an ecosystem in part sculpted by frequent fires that would destroy forests dominated by other tree species. 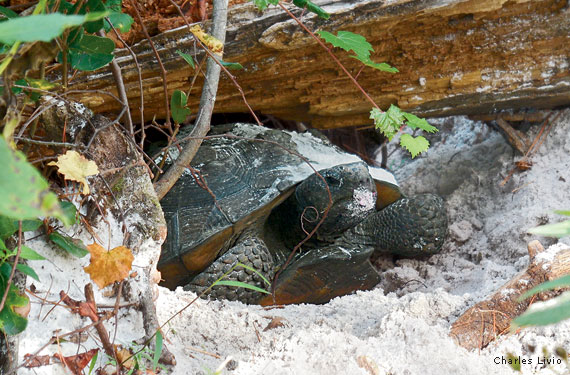 Fire plays a critical role in the entire ecosystem, which isn’t surprising since longleaf forests evolved in a region known for its frequent lightning. Low-intensity fires clear away brush and keep the forest open by suppressing the growth of hardwood species such as oak and tulip poplar that could stifle the longleaf seedlings. This provides suitable nest sites for ground-nesting birds such as Bachmann’s sparrow and open spaces in which the gopher tortoise can forage and dig burrows—subterranean residences that offer homes and safety to more than 350 other species (see “Excavator Extraordinaire,” National Wildlife, August/September 2012). The cleared ground also enables the flatwoods salamander to make its way to and from small wetlands in the piney woods where it breeds. Altogether, nearly two-thirds of the declining, threatened or endangered species in the southeastern United States are associated with the longleaf forest ecosystem. The open grassy areas also can provide good grazing areas for cattle.

However, many people simply appreciate the beauty of the longleaf pine habitat. Four years ago, Nancy Stembridge restored longleaf on 38 acres of a farm near Dothan, Alabama, that she and her nature-loving siblings inherited. As part of the project’s second phase, AWF biologists such as Mitchell are providing information and technical assistance to her and other project participants in order to restore grasses and other species typically found on the forest’s floor. These include plants such as butterfly pea, blazing star and milkweed that attract pollinators as well as partridge pea, whose seeds feed quail. These plants are ideal for her land, which is an NWF Certified Wildlife Habitat® site. 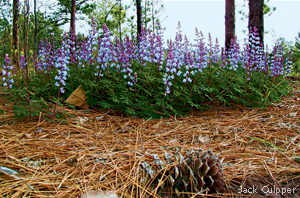 “Just to see the relationship between the understory and the pine trees is just amazing,” says Stembridge, now in her late sixties. “We’d like to restore the ecosystem back to the way it was before our grandfather cleared the fields.” And it will be particularly exciting to see quail return to the land, she notes, because they were plentiful on the farm when she was growing up.

Many landowners involved in longleaf restoration efforts believe strongly in the value of what they’re doing—so much so that they continue to expand their longleaf holdings even though the trees won’t mature for many decades to come. Dowling planted 10,000 trees on another tract last year. “And I’m still planting longleaf today,” says Dowling, who will plant more on 50 acres this year. “Maybe my grandkids will appreciate them.”

“You want to leave your property so young people will continue to manage it,” agrees Carstarphen. “It’s all about the future generations.”

Sid Perkins writes about all sciences—from astronomy and the environment to earth sciences and paleontology—from his home in Tennessee.

The NWF works with the Alabama Wildlife Federation to enable farmers, foresters and other private landowners to restore longleaf pine forests on their properties. Learn how to grow your own legacy at www.alabamawildlife.org/longleaf.