Special Report: Where the Presidential Candidates Stand on Conservation 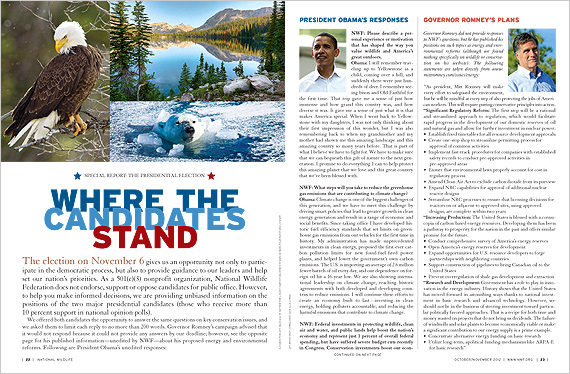 THE ELECTION ON NOVEMBER 6 gives us an opportunity not only to participate in the democratic process, but also to provide guidance to our leaders and help set our nation’s priorities. As a 501(c)(3) nonprofit organization, National Wildlife Federation does not endorse, support or oppose candidates for public office. However, to help you make informed decisions, we are providing unbiased information on the positions of the two major presidential candidates (those who receive more than 10 percent support in national opinion polls).

We offered both candidates the opportunity to answer the same questions on key conservation issues, and we asked them to limit each reply to no more than 200 words. Governor Romney’s campaign advised that it would not respond because it could not provide any answers by our deadline; however, see below for his published information—unedited by NWF—about his proposed energy and environmental reforms. Following are President Obama's unedited responses.

NWF: Please describe a personal experience or motivation that has shaped the way you value wildlife and America’s great outdoors.

Obama: I still remember traveling up to Yellowstone as a child, coming over a hill, and suddenly there were just hundreds of deer. I remember seeing bison and Old Faithful for the first time. That trip gave me a sense of just how immense and how grand this country was, and how diverse it was. It gave me a sense of just what it is that makes America special. When I went back to Yellowstone with my daughters, I was not only thinking about their first impression of this wonder, but I was also remembering back to when my grandmother and my mother had shown me this amazing landscape and this amazing country so many years before. That is part of what I believe we have to fight for. We have to make sure that we can bequeath this gift of nature to the next generation. I promise to do everything I can to help protect this amazing planet that we love and this great country that we’ve been blessed with.

NWF: What steps will you take to reduce the greenhouse gas emissions that are contributing to climate change?

Obama: Climate change is one of the biggest challenges of this generation, and we have to meet this challenge by driving smart policies that lead to greater growth in clean energy generation and result in a range of economic and social benefits. Since taking office I have developed historic fuel efficiency standards that set limits on greenhouse gas emissions from our vehicles for the first time in history. My administration has made unprecedented investments in clean energy, proposed the first-ever carbon pollution limits for new fossil-fuel-fired power plants, and helped lower the government’s own carbon emissions. The U.S. is importing an average of 2.6 million fewer barrels of oil every day, and our dependence on foreign oil hit a 16-year low. We are also showing international leadership on climate change, reaching historic agreements with both developed and developing countries to reduce emissions. I will continue these efforts to create an economy built to last—investing in clean energy, holding polluters accountable, and reducing the harmful emissions that contribute to climate change.

Obama: I am committed to protecting our natural resources while creating jobs, preserving habitats, and ensuring that future generations can enjoy our nation’s outdoor heritage. We are taking important steps to restore treasured landscapes that support recreation across the country. We are making the largest investment in the Great Lakes in two decades, and are helping restore tens of thousands of acres in the Everglades. We are directing additional funding to Gulf Coast restoration to address the decades-long decline in its coastal ecosystems and help improve the natural resources and economy, impacted by the Deepwater Horizon spill. We are restoring wetlands and fish habitats in ecosystems across the country, including the Upper Mississippi River basin, Chesapeake Bay, and California Bay-Delta. My administration has fought to protect the Land and Water Conservation Fund, which is helping to implement conservation practices on more than 2 million acres of land. These conservation actions protect our cherished natural resources and help restore habitat, open more lands for hunting, fishing and other recreation, and bolster local economies across the country, which is good for communities today, and generations down the line.

NWF: What steps will you take to enhance the protection of America’s public lands—from national parks and forests to wildlife refuges and Bureau of Land Management lands—for this and future generations?

Obama: We’ve got to protect the places that help define who we are as a nation. Places that help attract visitors and create jobs, but that also give something to our kids that is irreplaceable. One of the first laws I signed after taking office was one of the largest expansions of protected wilderness in a generation, protecting more than a thousand miles of rivers and millions of acres of landscapes across the country, and establishing new national parks and trails. And two years ago, we kicked off the America’s Great Outdoors initiative to support conservation projects happening in all 50 states. I’ve designated new national monuments at Fort Monroe and Fort Ord, an action that will not only preserve national landmarks, but help to create jobs and grow the local economy. And my administration is expanding access to public lands so that more Americans have access to spaces where they can cast a rod or teach their children how to hunt. I am committed to ensuring that our public lands and federal treasures are here for all Americans to enjoy our shared national heritage.

NWF: What will you do to ensure the continued health and recovery of the Great Lakes and other water resources in this country?

Obama: I am committed to ensuring that our nation’s vast natural resources are used responsibly, and that we maintain healthy oceans and coasts. We kicked off the Great Lakes Restoration Initiative, the largest investment in the Great Lakes in two decades, which is targeting ecological problems such as invasive species, toxic hot spots, polluted runoff from farms and cities and declining wildlife habitat. We are also working tirelessly on an unprecedented effort to halt the spread of Asian carp, which are threatening the Great Lakes ecosystem. Around the country, we have created or enhanced more than 540 public coastal recreation access sites, protected more than 54,000 acres of coastlines and restored over 5,200 acres of coastal habitat. And we are working to ensure the integrity of the waters Americans rely on every day for drinking, swimming and fishing, by supporting initiatives that restore our rivers and watersheds. These investments are revitalizing communities and economies by improving water quality, encouraging water efficiency, and restoring rivers and critical watersheds.

NWF: Research shows that children today spend an average of just seven minutes in unstructured outdoor play in nature each day, compared with seven and a half hours each day in front of an electronic screen, yielding harmful impacts to their health. What efforts will you undertake to help reverse this trend?

Obama: Countless Americans enrich their lives and their health by getting active. I am proud of Michelle’s “Let’s Move” initiative. As of this month over 3,800 schools were going the extra mile to promote physical activity and healthy eating and hundreds of communities across America have signed up for Let’s Move Cities and Towns. Through this program, local leaders are bringing “Let’s Move!” to their community and making commitments that make their communities healthier, including increasing the number of safe places for families to play and supporting expansion of playgrounds. As kids become more active, we are increasing their options for outdoor activities. My administration has been working to revitalize a new generation of urban parks, increasing access to open spaces in urban areas. We launched an initiative to increase access to and use of national parks, expand programs that use public lands as outdoor classrooms, and employ thousands of youth to protect and restore our environment and communities. We’re helping to provide children with access to the outdoors and encouraging hands-on learning about nature and conservation. And there is still more that can be done. We need to continue promoting physical activity, and making the outdoors an accessible tool for education and recreation.

NWF: In light of recent onshore and offshore spills into waters such as the Gulf of Mexico, the Yellowstone River and the Kalamazoo River, what steps will you take to ensure safer and more responsible development of oil and gas?

Obama: I am committed to making sure that domestic production of natural resources like oil and gas is done in a safe and responsible manner that protects the environment and human health. In response to the Gulf of Mexico oil spill, we launched the most aggressive and comprehensive reforms to the safety and environmental regulations governing offshore drilling in U.S. history, improving oversight, and putting in place commonsense new safety requirements to prevent a similar disaster from happening again. Heightened safety requirements and considerations are being carefully integrated into all decisions being made about expanded drilling. While some in Congress are irresponsibly advocating for opening up offshore drilling on all U.S. coasts without the proper environmental assessments or infrastructure to respond to spills in place, my administration is working toward a balanced and careful approach to development that accounts for resource potential, environmental concerns, and the social, cultural, and subsistence needs of local communities.

Governor Romney did not provide responses to NWF’s questions, but he has published his positions on such topics as energy and environmental reforms (although we found nothing specifically on wildlife or conservation on his website). The following statements are taken directly from www.mittromney.com/issues/energy:

“As president, Mitt Romney will make every effort to safeguard the environment, but he will be mindful at every step of also protecting the jobs of American workers. This will require putting conservative principles into action.

“Significant Regulatory Reform: The first step will be a rational and streamlined approach to regulation, which would facilitate rapid progress in the development of our domestic reserves of oil and natural gas and allow for further investment in nuclear power.

Streamline NRC processes to ensure that licensing decisions for reactors on or adjacent to approved sites, using approved designs, are complete within two years
“Increasing Production: The United States is blessed with a cornucopia of carbon-based energy resources. Developing them has been a pathway to prosperity for the nation in the past and offers similar promise for the future.

Prevent overregulation of shale gas development and extraction
“Research and Development: Government has a role to play in innovation in the energy industry. History shows that the United States has moved forward in astonishing ways thanks to national investment in basic research and advanced technology. However, we should not be in the business of steering investment toward particular politically favored approaches. That is a recipe for both time and money wasted on projects that do not bring us dividends. The failure of windmills and solar plants to become economically viable or make a significant contribution to our energy supply is a prime example.

Learn more about the how the votes on Capitol Hill could impact the conservation issues you care about: Elections 2012: High Stakes for Wildlife
Take the pledge: This year vote wildlife-friendly!
Support NWF's work protecting America's wildlife