When School is for the Birds

At an NWF-certified schoolyard in North Carolina, nest boxes and webcams help bluebirds while inspiring their student caretakers 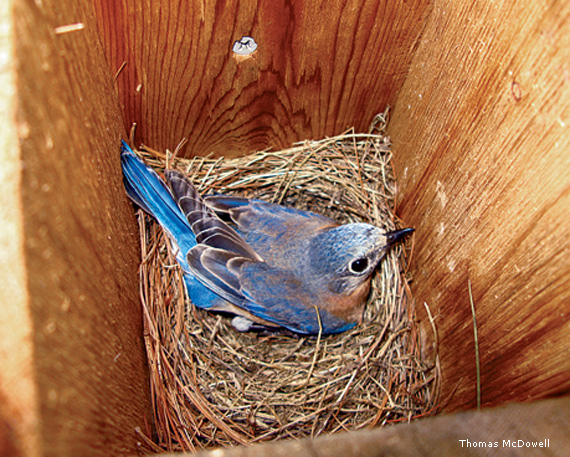 AT A TIME WHEN parents and teachers are trying to get kids to watch less TV, it may seem surprising that adults affiliated with Penny Road Elementary School don’t mind if students spend valuable class time glued to the tube—as long as the set stays tuned to Channel 10.

Broadcasting 24 hours a day between early spring and the start of summer break, Channel 10 streams live video captured by a camera tucked into an eastern bluebird house at the school. The nest cam is part of a larger bluebird project at Penny Road, a certified unit of NWF’s Schoolyard Habitats® program in Cary, North Carolina.

Launched in 1996 as an extension of NWF’s Certified Wildlife Habitat® program for homeowners, the schoolyard effort provides teachers and students opportunities to develop havens for native wildlife on their school grounds. It also creates outdoor classrooms where a variety of subjects, from science to math to writing, can be taught. Today certified schoolyards are located at more than 4,000 schools across the nation.

Research suggests that these unconventional classrooms are helping children learn. A 2008 study of fourth-grade students in Houston, Texas, conducted by the American Society of Horticultural Science, for example, found that students who participated in the NWF program had significantly higher math scores on standardized tests than those taught using a more traditional math curriculum.

Such results do not surprise Nicole Rousmaniere, senior coordinator of NWF’s habitat programs. “It makes sense that schoolyard habitats would lead to better math and other test scores,” she says. “These habitats’ ability to engage students and provide endless real-world examples and problems is extraordinary.”

At Penny Road, the bluebird project started seven years ago when John and Ann Sykes’ daughter, Rachel, entered kindergarten, and her parents volunteered for the PTA’s building and grounds committee. A program analyst at the U.S. Environmental Protection Agency, John wanted to create something on the grounds that would encourage more interest in science and environmental issues.

“I’ve been a huge birder since I was a child,” says Ann, so refurbishing a few dilapidated bluebird houses at the school—which sits within a large park—seemed like a good place to start. After John contacted the North Carolina Bluebird Society for advice, “we suddenly had all of these people donating and building nest boxes for us,” says Ann. Today the school maintains 20 bluebird houses scattered over 25 acres.

This new real estate undoubtedly has helped the birds. “Without nest boxes, we would no longer have eastern bluebirds,” says Bill Satterwhite, coordinator of the nonprofit Bluebirders of Wake County, which donated several boxes to the school. After declining steeply in the early 20th century—a consequence of nesting habitat loss and competition from nonnative house sparrows and European starlings—bluebirds “are relatively plentiful now,” he says.

But the project may have helped students even more than the birds. When the Sykes added a webcam to one nest box in 2007, the video initially was broadcast into teacher Mike Hopkins’ first-grade classroom. “We used it in biology, math and writing lessons,” he says. Students kept journals, for example, and calculated the amount of time between nest building, egg laying, hatching and fledging. “It inspires and helps kids learn,” Hopkins says. Soon other teachers were clamoring for their own videos, and the webcam now streams into all of the school’s 49 classrooms. 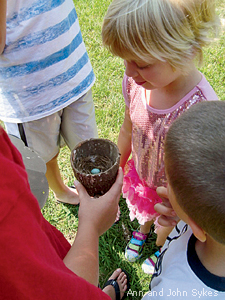 The bluebirds have particularly inspired students with special needs, says school speech pathologist Paula Izquierdo, who works with children struggling with autism, learning disabilities and other problems. Her observation makes sense: In addition to a growing body of evidence that interacting with nature is good for all children, a handful of studies show that a dose of the outdoors is particularly beneficial to special-needs kids. Last year, for example, researchers from the University of Illinois–Urbana-Champaign reported that children with attention deficit-hyperactivity disorder (ADHD) who regularly play in natural settings outside have milder symptoms than those who play indoors or outdoors in artificial environments.

Izquierdo describes one experience with Saif, a wheelchair-confined second grader who has cerebral palsy and cognitive impairment. After watching the bluebirds on TV, the two went outside to explore the habitat that nurtures the birds. “As we went around, I took pictures and told him we’d use them to make a story about birds and spring,” she says. The following day, Izquierdo put the photos on a table, and Saif arranged them. “Here was a child who rarely said more than two or three words at a time,” she recalls. “But the story he told that day was so long and involved, it was like he was my teacher.”

Saif was hardly alone in his enthusiasm. “The first time I saw an egg hatch, I was enthralled,” admits Izquierdo. Ann Sykes, who works as a substitute teacher at the school, has noticed a difference when students go outside for physical education. “It used to be go out, run around the track, then race back inside,” Sykes says. “Now the kids stop and look around to see what birds and other animals are out there. They are much more aware of nature.”

Through NWF’s Schoolyard Habitats® program, teachers in all 50 U.S. states and two territories are getting children outdoors while improving their aptitude for learning. NWF’s Be Out There® campaign offers a variety of activities and other resources for educators and parents that encourage children to go outside and enjoy nature.

Discover how to create an NWF Certified Wildlife Habitat™ site!