By helping birds, residents of cities and suburbs can contribute to conserving biodiversity 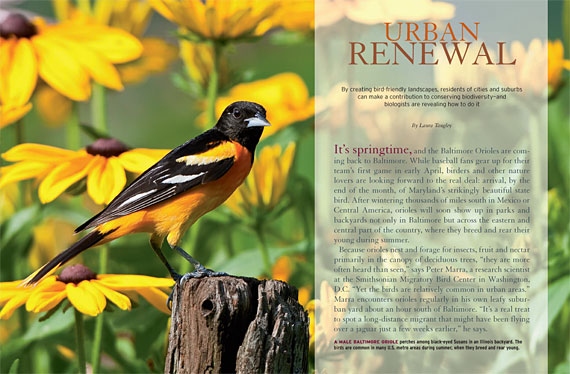 IT'S SPRINGTIME, and the Baltimore Orioles are coming back to Baltimore. While baseball fans gear up for their team’s first game in early April, birders and other nature lovers are looking forward to the real deal: arrival, by the end of the month, of Maryland’s strikingly beautiful state bird. After wintering thousands of miles south in Mexico or Central America, Baltimore orioles will soon show up in parks and backyards not only in Baltimore but across the eastern and central part of the country, where they breed and rear their young during summer.

Because orioles nest and forage for insects, fruit and nectar primarily in the canopy of deciduous trees, “they are more often heard than seen,” says Peter Marra, a research scientist at the Smithsonian Migratory Bird Center in Washington, D.C. “Yet the birds are relatively common in urban areas.” Marra encounters orioles regularly in his own leafy suburban yard about an hour south of Baltimore. “It’s a real treat to spot a long-distance migrant that might have been flying over a jaguar a few weeks earlier,” he says. 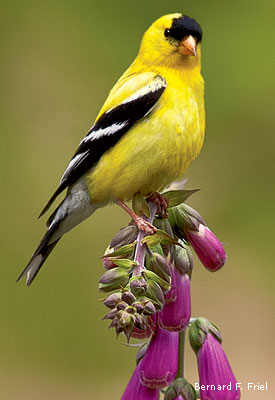 Orioles are far from the only birds getting ready to breed in Baltimore. According to a long-term survey sponsored by the National Science Foundation (NSF), more than six dozen avian species nest and rear their young within this major metropolitan area—from common backyard denizens like blue jays, chickadees and American goldfinches (left) to elusive warblers and wood thrushes to shore-loving herons, gulls and cormorants. Scientists conducting the ongoing survey tally birds in a handful of the city’s parks, but have recorded the majority of species and individual birds in the places where Baltimore’s human residents live and work.

“Traditionally, people tended to view metro areas like Baltimore as biological deserts,” says John Kostyack, NWF’s vice president for wildlife conservation. “But it turns out that many of us live where the wild things are.” Home to 82 percent of the nation’s population, cities and suburbs in the United States house two-thirds of all North American wildlife species, including many imperiled plants and animals. According to the report Endangered By Sprawl, published by NWF, Smart Growth America and NatureServe in 2005, the country’s 35 fastest-growing large metropolitan areas (those with populations of 1 million or more) are home to 1,200 rare or endangered wildlife species, 553 of which live only in large metro areas. A coauthor of the report, Kostyack has witnessed a subtle shift in perspective among his conservation colleagues since the document was published. Though sprawling development still is considered a major threat to native wildlife, he says “there’s also a recognition that people in developed areas have enormous opportunities to protect biodiversity where they live.”

As an increasing share of the world’s growing population moves to cities and suburbs that gobble up what’s left of natural areas, conserving urban biodiversity has never been more important. “If you look at an aerial photo of the United States at night, it’s clear that the urban-suburban matrix has overtaken more than half the nation’s territory,” says University of Delaware entomologist Doug Tallamy, author of Bringing Nature Home: How You Can Sustain Wildlife with Native Plants. Moreover, activities within urban areas—including water use, wastewater treatment and the cultivation of invasive, nonnative plants—affect wildlife far beyond city boundaries. “There’s simply no way we can conserve the biodiversity needed to sustain ourselves and all life on Earth if we ignore urban areas,” Tallamy says.

The good news is that many policymakers, urban planners and homeowners are beginning to agree. “There’s been growing interest in green development in recent years,” says Mark Hostetler, a wildlife ecologist at the University of Florida–Gainesville. “More people also want to see wildlife in their yards. Conserving urban biodiversity fits both of these goals.” Unfortunately, many green developments fall short of meeting their objectives. “The potential is there, but developers spend most of their time on design and too little time on construction and post-construction phases of projects,” says Hostetler, author of The Green Leap: A Primer for Conserving Biodiversity in Subdivision Development.

Another challenge is a shortage of scientific research on the needs of urban wildlife. Like conservationists, many biologists have treated cities and suburbs as lost causes unworthy of their attention. Part of a larger NSF-sponsored project called the Baltimore Ecosystem Study (BES), the Baltimore bird survey is a notable exception. Launched in 1997, BES and a similar project in Phoenix, Arizona, represent the first in-depth, long-term studies of what the foundation calls “human-dominated ecosystems.” 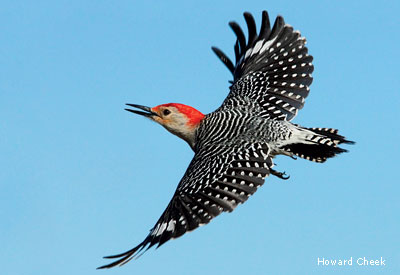 For the bird survey, dozens of researchers have spent the past eight summers monitoring avian abundance and diversity at 132 census points scattered around the metro area. Surveyors visit and tally birds at each point three times during the breeding season. So far, they have recorded 80 species that regularly reproduce in Baltimore (including the red-bellied woodpecker, above)—more than half the breeding bird species found within the region.

“Our next step is to work out why we find different species where we do,” says BES principal investigator and bird survey director Charles Nilon of the University of Missouri–Columbia. To do that, Nilon and his students have been recording and analyzing a variety of data about the census points—including land use, vegetation cover and socioeconomic variables such as income, education and ethnicity—at three scales: the property, block and neighborhood that surrounds each point. “The number one predictor of high diversity and abundance we’ve found is vegetation cover, particularly tree cover,” Nilon says.

Though Nilon and his colleagues record the numbers and types of plants at each location—trees, shrubs and vines, for example—they do not take note of species, including whether plants are native to the region. Such data should be incorporated as the study moves forward, says Tallamy. “Most biologists assume that when it comes to bird habitat, if it’s green, it’s good,” he says. “But that’s not true.” Tallamy argues that when nonnative plants replace natives, as they often do in urban areas, this affects entire food webs by reducing plant-eating insects—the most important food for animals ranging from other insects and spiders to reptiles and amphibians to mammals and birds. “Birds do not reproduce on berries and seeds; 96 percent of terrestrial birds rear their young on insects,” he says (male northern cardinal feeds its mate a beetle larva, below).

Because native insects did not evolve with nonnative plants, most lack the ability to overcome the plants’ chemical defenses so cannot eat them. In the Mid-Atlantic region, for example, Tallamy says native oaks provide food for 534 caterpillar species while gingko—a popular nonnative street tree—supports just one. Birds such as chickadees and warblers rely specifically on caterpillars for 90 percent of their diet during the breeding season.

In a large, multiyear study published in Ecosphere, Tallamy and several colleagues compared the number of caterpillars found in Delaware and Pennsylvania gardens dominated by native plants with the number found in gardens containing more nonnatives. Depending on how closely related exotics were to natives, the researchers discovered a 50 to 75 percent decrease in caterpillar abundance and diversity in the nonnative plots. “That’s a lot less bird food,” Tallamy notes.

Another study, published in Conservation Biology, demonstrates the connection between native plants, caterpillars and birds. When the scientists surveyed six pairs of properties in suburban Pennsylvania—each including one yard landscaped primarily with native plants and the other with a mixture of natives and exotics—they found more caterpillars and birds in the native-only yards. The native-plant properties nurtured more individual birds as well as more species, including eight times more species of regional conservation concern.

In the suburbs of Baltimore and Washington, D.C., Marra is making similar observations. For the past 13 years, he has run the Smithsonian’s Neighborhood Nestwatch program, a citizen-science project with more than 250 families helping researchers band and track the life spans and reproductive success of eight common backyard birds, including northern cardinals, gray catbirds, American robins and house wrens. Based on the results, Marra concludes: “The three most important things homeowners can do to help birds are eliminate pesticides and free-roaming domestic cats and add native plants.”

By helping birds, homeowners also will be helping other wildlife. “Birds are good ecological indicators,” Tallamy says. “If you have a diverse native bird population, it’s a sign that the ecosystem as a whole is healthy.”

This year NWF’s Certified Wildlife Habitat® program is celebrating its 40th anniversary. To mark the milestone, the Federation will be ramping up the program in an effort to expand the number and diversity of participants in the nation’s cities and suburbs. “The wildlife conservation community has given far too little attention to urban and suburban landscapes,” explains John Kostyack, NWF’s vice president for wildlife conservation. “We’re expanding our efforts in the places where people live, work and play.” In the coming year, the program will focus on four U.S. metropolitan areas—Baltimore, Seattle, Houston and New York City—by encouraging these regions’ homeowners, city and county parks agencies and others to help at-risk species (primarily birds, butterflies, bees and other pollinators) in and around their properties.